Last night, I had the opportunity to view Tsai Ming-liang's Goodbye, Dragon Inn (2003) for a third time. Although I am ashamed to admit it, the first time I saw Tsai's film, I found it to be visually beautiful, however slight -- that is, lacking a substantial connection between its form and content -- as well as quite boring. My second viewing led me to dramatically revise my opinion:

let me just say that I now feel that it is the best film of its year, which remains my judgment having now seen it for a third time. While I would change little of my formal analysis other than to say that the first lines of dialogue occur closer to 45:00 than to 1:00:00, an intervening viewing of Tsai's most recent film, 2005's epic misfire The Wayward Cloud, afforded me a new perspective on the subject of the earlier film's elegy: not only is it the movie palace that is memorialized in its final, depopulated throws, but so is it the end of the communal period of the arts that such public spaces represent: namely, modernism. Indeed, Tsai is himself noteworthy for coming to prominence with works that are unmistakably high modernist in both their ethos and also in their subject matter: Vive l'amour (1994) is the ultimate oriental Antonioni, whereas What Time is it There? (2001) wears its Truffaut debt -- right down to its Leaud cameo -- on both sleeves.

The Wayward Cloud, on the other hand, crosses over from the dead-pan of Tati to an anarchic nihilism hiding beneath the surface of a soft-core musical fantasy -- it is, in a word, postmodern. If ever there was a path leading back toward a common cinephilic culture, The Wayward Cloud is nowhere near it; it is the ultimate marginal art film. Goodbye, Dragon Inn, oppositely, revisits the aesthetic of the high European art film at the peak of its mid-60s celebrity. As an advocate of that movement, particularly when its positioned against its more recent counterpart, I have to hope that Tsai doesn't forever intend to work outside the aegis of modernism and that any apparent turning point will someday prove to be nothing more than an anomaly. Or maybe Tsai will show us a way forward. 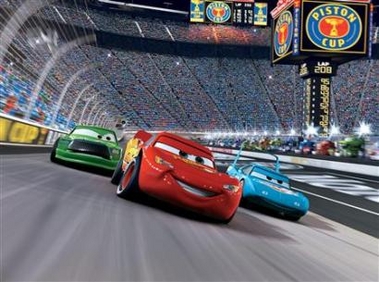 While browsing one of my favorite industry blogs the other day, Anne Thompson's Risky Biz Blog, I noticed that my site was listed under her Hollywood blog roll (as opposed to the "Indiewood" sites, where I would assume that it might be a better fit). Never mind the strange categorization, I was just happy to see that Tativille was listed on a site with far more traffic than I could ever dream of. So I suppose it was with this newfound (and uninvited) commitment to Hollywood that I decided to see John Lasseter's Cars -- that, and my bandwagon support for Pixar's preeminence among studios, at least since I saw Brad Bird's superlative The Incredibles (2004) two winters ago. Suffice it to say that Cars fits squarely within Pixar's discursive project, with the same nostalgic emphasis as Lasseter's earlier work: think of Cars as a Nascar Toy Story from Buzz Lightyear's perspective. The Incredibles, to be sure, also trades on the idea that things used to be better, though in its case, Bird laments our self-esteem-obsessed and litigation-happy society's war on exceptionalism; for Cars, its the quainter view (not to use that word pejoratively) that something has been lost with the bi-passing of America's small towns along with the construction of the interstate system. It is communalist in the classically American sense of simple people and small town values.

Because of Cars' preference for Route 66 America, it does seem somewhat counterintuitive that it would be the bearer of the latest in animation technology: were it to have ambitions to equal the Goodbye, Dragon Inn's of the world, one can imagine the filmmakers' switching from computer-based to hand-drawn animation to match Lightning McQueen's integration into this earlier way of life. Then again, Pixar -- and Lasseter in particular -- seem intent on co-opting the values of the past for its new technology. Nevertheless, Cars should be regarded for what it is, not what it isn't... and what it is is a film that soars in its best moments (even if it also languishes for a large portion of Lightning's sojourn in Radiator Springs). In particular, Lasseter demonstrates his exceptional action direction in the racing sequences, where his positioning of the spectator in the middle of the speeding automobiles adeptly draws on the picture's animated form. Likewise, Lasseter, co-director Joe Ranft, and their animators deserve particular credit for bringing the inorganic to life, while maintaining a sense for their material nature. Also, has there been another so thoroughly Dixie feature-length cartoon from Disney since Song of the South (1946)?
Posted by Michael J. Anderson at 6:06 PM

I did the same thing - I re-viewed Goodbye, Dragon Inn (and watched the short "The Skywalk is Gone" for the first time) after that Wayward Cloud screening. It was a regaining of moorings after what you so accurately describe as his sloppy bid at postmodernism.

I find some parts of the film hard to shake off, though, and this Rouge article, a shot-by-shot analysis of the final scene,(http://www.rouge.com.au/rougerouge/wayward.html) makes some interesting claims. Absurd maybe, but it's come closest to my own divided response.

And congrats on your increasing traffic.