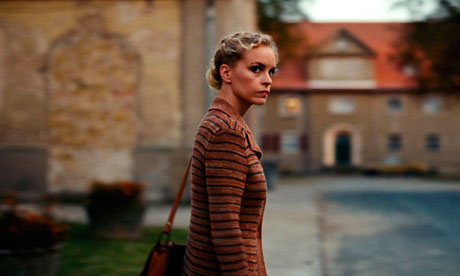 Recipient of the Silver Bear for best director at the 2012 Berlin International Film Festival, Christian Petzold's Barbara (2012), from a screenplay by Petzold and renowned experimental documentarian Harun Farocki, succeeds in providing one of the most incisive portraits yet of the everyday paranoia brought into existence by the German Democratic Republic's all-seeing Stasi. In Petzold's highly accomplished latest, everything is minutely calibrated detail and unerringly precise observation, which is to say that Barbara is absolutely saturated with its police state subject matter. Nowhere does this discourse play out with greater concentration or drama than on Nina Hoss's angular, intractable face. Petzold both opens and closes his film on the visage around whom will build his GDR-era thriller - on the dark blue eyes, high sculpted cheekbones and sullen lips that will conceal the mysteries of past traumas and keep secret personally damaging future designs.

Barbara commences with the arrival of Hoss's eponymous heroine in the East German countryside, 1980. Barbara is a reassigned Berlin physician and former member of the nation's prison population, for crimes not specified anywhere in Petzold's film. Being fully aware of the Stasi's constant human surveillance, Barbara is deeply guarded and cautious upon first arriving in the provinces; when, for example, her immediate supervisor André (Ronald Zehrfeld) fails to ask her address when driving her home from the hospital, she protests and demands that she be let out of the vehicle - thus recognizing that he is one of the East German police's countless civilian agents. At home, the sudden shock of her apartment buzzer - Petzold has long since mastered the sonorous effects of the horror film - is accompanied by the appearance of a prying neighbor who demands that Barbara immediately inspect a storage area. Barbara, in other words, is surrounded by those who will scrutinize her every gesture.

Of course, Barbara's own actions early in the film also resonate with intrigue: after receiving a small monetary package inside a restaurant lavatory, she departs for a desolate stretch of countryside where she buries her newly acquired bundle. Returning home on her bicycle later that evening, she is stopped by state officials who are dubious of her nighttime choice of transportation. Indeed, they will later pay Barbara a pair of home visits, which in both instances will include off-camera cavity searches administered by a female agent. Petzold's slow-burn narrative thusly shades from the initial mystery of Barbara's undisclosed identity to the realm of suspense as her clandestine activities, including her secret meetings with a West German lover Jörg (Mark Waschke), must be kept from the watchful eyes of the Stasi's expansive network of civilian informers. In Barbara, the smallest of on-screen details possess the capacity to destroy the film's focalized female lead - and her hopes of reuniting with the no less enigmatic Jörg.

As Barbara progresses, Petzold's subject begins to pivot from pure political thriller to ethics-oriented melodrama, with the needs of the titular lead's patients coming to take increased precedent. Of particular note is a hysterical young female patient named Stella (Jasna Fritzi Bauer), whom Barbara soon discovers has spent time at an East German prison/concentration camp. Barbara's compassionate attitude toward the patient is contrasted early on with André's lack of apparent sympathy: he inhumanely refers to Stella on multiple occasions without once mentioning her by name, a point that Barbara accusatorially notes. André, however, will consequently show his own Hippocratic commitment and human feeling in treating another male patient, who, like Stella, will play a key role in the film's final suspense-filled act. Suffice it to say that admitted Stasi informer André will prove more an ally than an antagonist as the film transforms into medical melodrama. Petzold in this sense, as in another key instance, humanizes the film's Stasi, though admirably not to the point that they are prevented from carrying out their heinous activities.

In both content and form Barbara again represents a new peak in Stasi-themed cinema, easily besting Florian Henckel von Donnersmarck's somewhat suspect Academy award-winner The Lives of Others (2006). What von Donnersmarck's film does well, Hitchcockian suspense, Barbara does even better, which following first-rate thrillers like Jerichow (2008) and Beats Being Dead (2011) - Barbara strongly recalls the former in its low-key nocturnal set-pieces and the latter in its cool verdant landscapes - should come as no surprise. Petzold indeed has long since confirmed his stature as the Berlin school's master of genre, while that movement's leading female lights especially - Maren Ade, Valeska Grisebach and Pia Marais, to name three - continue to supply the small "a" art cinema (when, that is, they have the opportunity to work). Of course, Petzold is no stranger to this latter mode, having made one of the first humanist masterworks of the Berlin-school movement in 2000's adolescently focalized The State I Am In. In returning in Barbara to terrain proximate to the historical-political content of The State I Am In, Petzold has made his best film since the latter work - and perhaps his best film to date.

Let me thank Lisa K. Broad for her many contributions to this piece, and throughout the festival. Speaking of Lisa, be sure to check out her final festival report card, where she and I grade eighteen films from this year's event.
Posted by Michael J. Anderson at 2:44 PM