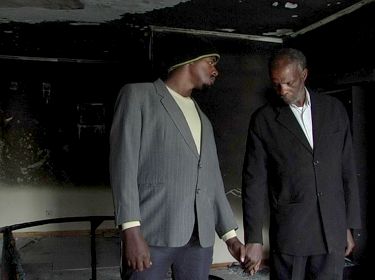 Pedro Costa's Colossal Youth (Juventude Em Marcha, 2006) recently concluded its ten-day Manhattan run as the season's most improbable über-small scale art house sensation. In some distant recess of the cinematic universe, Colossal Youth may just be the film of the year - that is as the latest and in many senses the most extreme instantiation of a European filmic minimalism that seeks to reinvent the language of the medium wholesale.

Colossal Youth opens with an extreme long framing of a Portuguese slum as furniture is tossed from a second floor window. In the next shot we see an aged immigrant woman, standing on a staircase with knife in hand, as she discusses swimming in Cape Verde as a younger woman. Like the prior take, Costa's camera doesn't move; in fact, with very few exceptions - a tilt here, and pan there - the director's camera never moves. It is only later that we will piece together that the woman presumably stabbed Ventura (played by an actor credited only as Ventura) who as the film proceeds will serve as our guide to the narrative.

As Colossal Youth unspools, Ventura moves between his former slum home, the new government flats built to house the former location's residents and even the makeshift housing that protected Ventura and a mate upon their 1972 arrival in Lisbon. In each of these places, save for the last, Ventura visits one or more persons that he refers to as his children, even when their physical appearance - to say nothing of the stories they narrate involving their biological parents - militate against the old man's claims (with the exception of the blind Bete). Regardless, Ventura's mobility provides Costa's minimal narrative with its structure: as a series of conversations and interactions between the lead and his under-class children.

This is to say, in the most conventional of senses, that nothing happens in Colossal Youth. In those instances that there is drama - when for example Ventura is stabbed (the opening image is an inversion of sorts as its long shot composition and presentation of action will be absent thereafter) or when Vanda's (Vanda Duarte, In Vanda's Room) sister dies - Costa's on-screen narrative, the image has excluded these incidents. Colossal Youth, in other words, is a narrative of interstitial fragments; we see a very small segment of the story Costa tells. In other words, Costa limits his narrative.

In a word, limitation is the operative principle behind Colossal Youth: whether it is the film's eschewal of action or more conspicuously, Costa's remarkably constricted framing. Throughout Colossal Youth, in fact, Costa reduces his frame to an excessively shallow space with one or two figures almost ubiquitously before a wall, a window or in a doorway. Maintaining this extraordinarily restricted framing, light enters the frame obliquely, detailing the edges of the shadow-engulfed figures. It is not only that Costa shows us an extremely small space but that even this fragment is often dominated by shadows: again, this is a cinema of infinite limitation.

Perhaps more than any other moment in Colossal Youth, this theme is highlighted in Ventura's inspection of his new flat. Here, Costa includes a door that continually swings shut, dictating that even in this potentially volumetric space Ventura will be restricted. He can never escape his social status, which along with everything else in Costa's film is worked out in spatial terms. Ultimately, the film's formal limitations match the social status of the film's heroic group: this swath of Lisbon's poorest class is removed to isolated corners of the slums and later to public housing once the former is raised.

Off-camera sound also proliferates, calling attention to the limitation placed on the mise-en-scène: the space utilized in the film, like the disclosure of narrative information, is severely limited, even as it continually refers to that which is not presented on screen. Costa is creating an art out of the scantest of means, thus confirming cinema's infinitesimal position within the broader cosmos. In this way, Colossal Youth is very much a film about the relationship between art and life, which is likewise established in the gap between the film's non-professional, Costa regular performers and the roles they play. When Ventura repeats the words of a letter time and again, we are reminded of this distinction.

In the end, Colossal Youth is above all a work of exceptional rigor, producing a form to match its content, whether it is the limitations noted above or in an experience of time to confer the banal subject.
Posted by Michael J. Anderson at 7:05 PM

Michael, have you seen In Vanda's Room? I assume you haven't as it is not on any of your year-end lists. It is in my mind an even greater accomplishment than Colossal Youth (which you have placed way too low on the year-end list, btw).
The Criterion set comprising all three "Fontainhas" films is an excellent package with an abundance of great extras.