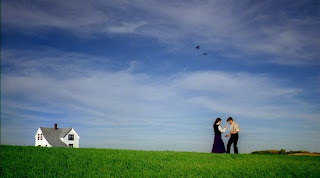 Ali Selim's Sweet Land, adapted by Selim and Will Weaver from the latter's short story "A Gravestone Made of Wheat," distinguished itself as a word-of-mouth favorite, running for a remarkable 37 consecutive weeks on 300 screens, though the independently-financed film brought in a mere $1.7 million during its exceptional run. Never mind its popular and even critical success - which extended to two Independent Spirit Awards, including best actress for Elizabeth Reaser - Sweet Land may well be one of the worst high-profile independent productions of the past few years. Whether publicly taking this position means that I have forfeited my Minnesotan birthright (as the descendant of Swedish and Norwegian immigrants) remains to be seen.

Sweet Land opens with a framing device (situated in the present) that challenges the decision of a middle-aged man to sell his grandparent's family farm - upon the death of his grandmother - which is located on the tall grass prairies of western Minnesota. From here, we flash back to the 1960s for a second framing segment, wherein the same grandchild mourns the death of his Norwegian grandfather along with his aged grandmother and family friend Frandsen. Having thus described the passing of each, we finally arrive in the immediate aftermath of World War I. Here, a pair of beautiful German mail-order brides (including the aforementioned Reaser as Inge, who is destined to become the family matriarch) reach their Upper Midwest destination. Presently, we are also introduced fleetingly to a forward-thinking socialist promoting universal suffrage, and to the pervasive anti-German sentiment that otherwise defines the prairie community.

This intolerance is greatest, according to the convention that Selim reflexively adopts, in the community Lutheran church, even though Frandsen (Alan Cumming) cheekily mentions that Martin Luther was a German. (For whatever reason, I was reminded of a line in the British Office where David Brent defends pal Finchy's alleged misogyny: "how can I hate women, when my mother is a woman?" Salim and Weaver's screenplay showcases the same intellect throughout as does Brent's best bloke.) However, when faced with the loss of Frandsen's family farm through its foreclosure by the local bank - one thing we are repeatedly reminded of is Selim and Weaver's axiom that "banks and farming don't mix"; whether or not it is possible that the pair know so little about the economics of farming remains to be seen, though their complete lack of understanding of a how a farm is operated (according to my hobby-farmer father and Swede Jay) is manifest elsewhere and indeed suggests that they don't know the first thing about either - the intolerant Lutherans band together to save the aforesaid farm, following the lead of patriarch Olaf (Tim Guinee). Thus, through this social action, the rural Christians are redeemed, as is Inge in their view - that is, as she works for the benefit of the collective.

Ultimately, Sweet Land rates as the most openly socialist American indie in quite some time (along with Half Nelson perhaps) beyond its status as avowedly anti-Christian, so long that is as it doesn't serve the film's social agenda. Indeed, it is compelling to read Sweet Land as a modern American variation on Aleksandr Dovzehnko's sublime tractor epic Earth (1930). However, rather than securing a transcendence through its depictions of the landscape - that in the case of Earth challenge its socialist program - Salim establishes the film's generational component through its adoption of a pair of framing flashbacks. In other words, whereas Dovzhenko adopts a visual poetics worthy of Mizoguchi, Salim favors a Spielbergian manipulation of sentiment that has made Sweet Land more the heir to Saving Private Ryan (1998) than to the best examples of the Soviet cinema. In the tradition of Spielberg, Sweet Land is filmmaking with the heaviest of hands. 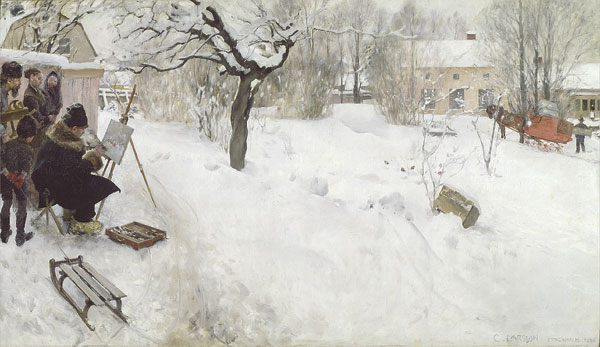 Though ostensibly serving rhetorical programs of their own, the works on display in the Minneapolis Institute of Arts' A Mirror of Nature: Nordic Landscape Painting 1840-1910 lack the insufferable didacticism of Salim's film. Offering instead the beauty and majesty of nature as source for national pride - hence the exhibition's title - A Mirror of Nature showcases a tradition of landscape painting that is mostly unknown outside of its native Scandinavia. Perhaps the best comparison I can make for my film literate readers is that Scandinavian landscape painting compares to South Korean cinema: while it is influenced by a number of its surrounding national traditions that are well known to the West, the rich tradition of Scandinavian landscape painting, like Korean cinema, remains the purview largely of its national audience and the occasional expert. In each case, a wider audience is well deserved. 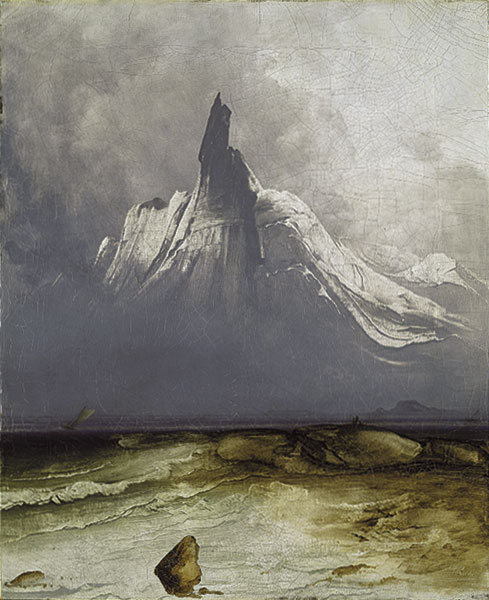 Among those works that best exemplify the eponymous aims of the exhibition are a series of works that collectively amount to what might be best described as a tradition of the Norwegian sublime, following closely in the manner of Caspar David Friedrich. Customarily, these works represent a figure or set figures immersed with an enormous, awe-inducing nature. While this effect possesses religious connotations in Friedrich - let alone in progenitors of the American sublime such as in the work Frederick Church - again the exhibition curators have emphasized its nationalistic meaning in works by Norwegians Johan Christian Dahl, Thomas Fearnley and Peder Balke (pictured above). That this characteristic would appear particularly prominent in works by Norwegian artists follows from that nation's tenuous existence during the period (in a union with Sweden under the control of the latter rival state; Norway did not attain full independence until 1905). 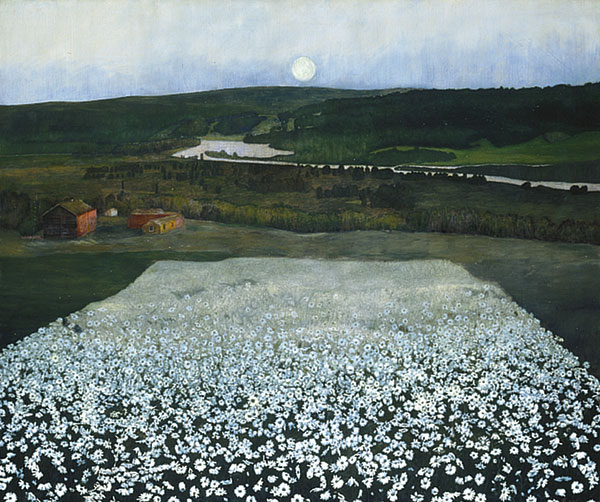 If there is a nation that stands out among the five represented (Denmark, Finland, Iceland, Norway and Sweden) it is Norway, not only for its indigenous tradition of the sublime, but also for a set of later works that emphasize a Parisian influence, be it the works of the Scandinavia's best-known painter Edvard Munch, or Harald Sohlberg's art nouveau Flower Meadow in the North (1905, pictured above). 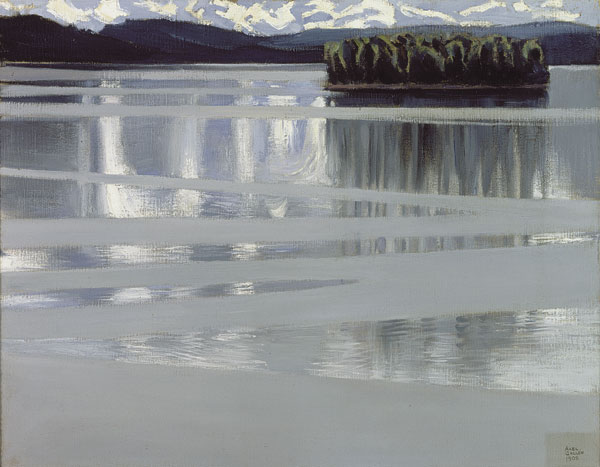 Apart from the Norwegians, perhaps the most interesting national body of work on display is that of the Finnish, and particularly the work Akseli Gallen-Kallela. While Mirror of Nature's Finnish painters otherwise highlight a singular tradition of primitivist folk art, Gallen-Kallela's art may be among the most sophisticated in the exhibition. For instance, in Lake Keitele (1905, pictured above), the painter combines the placid, mirror-like surfaces of the lake with large washes of gray that emphasize the formal properties of the medium. In a second composition, Waterfall of Mantykoski (1892-4), Gallen-Kallela superimposes five vertical bars over the image of a waterfall, thus figuring the harp whose sonority compares to that of the cascade. 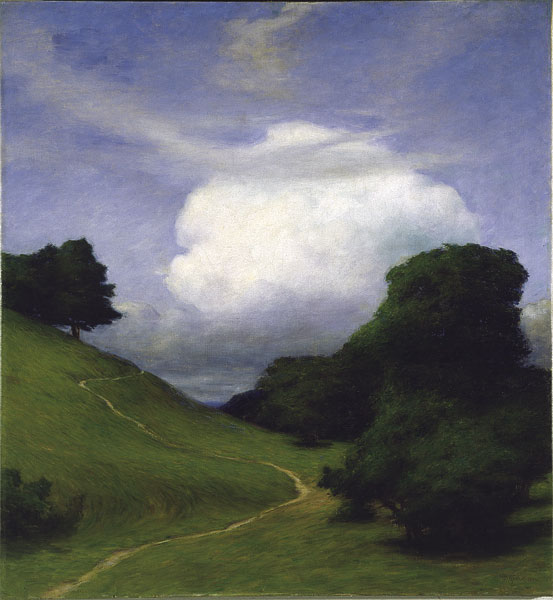 Other than the corpuses of Gallen-Kallela and certain of his countrymen, perhaps the most peculiar included in A Mirror of Nature is that of Sweden's Prince Eugen, which is noteworthly less for any representational ticks, than it is for the uncomplicated accomplishment of its royal creator. As the exhibition label states, "The Cloud [1896, pictured above] may at first sight seem to symbolize an ideal summer's day, but its mood is in fact more complex, marked by an undefined tension and a sense of a presence beyond what we are able to see." Along with Carl Larsson (his Open-Air Painter, 1886, is pictured at the beginning of this review), Price Eugen is the finest Swedish painter included in the exhibition and one of a number of revelations awaiting its Minneapolis patrons.

A Mirror of Nature: Nordic Landscape Painting 1840-1910 runs now through September 2 at the Minneapolis Institute of Arts. Following its lone North American venue, A Mirror of Nature will continue its tour of Scandinavia's capital cities. Sweet Land received its DVD release earlier this month.
Posted by Michael J. Anderson at 2:58 PM