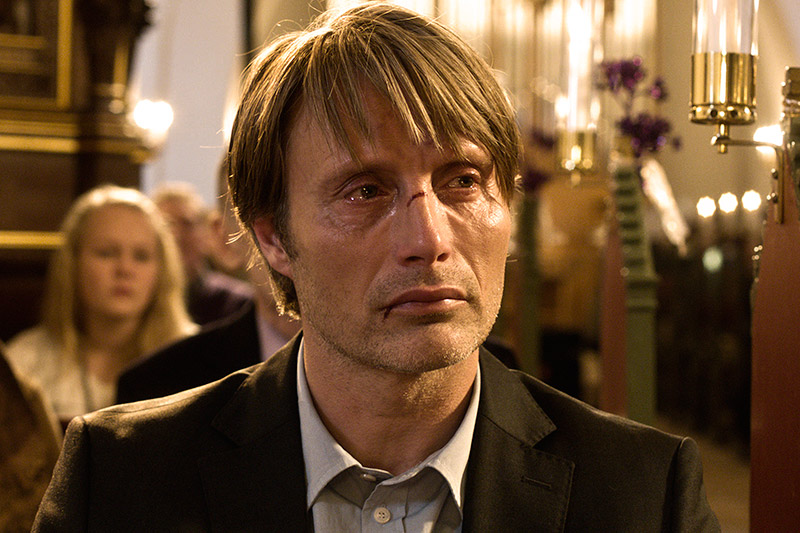 A Kafkaesque scenario of the agonizing injustices inflicted upon a kindergarten teacher falsely accused of child sex abuse, Thomas Vinterberg's The Hunt (Jagten, 2012), from a screenplay by Tobias Lindholm and the director, perceptively details the extra-legal apparatus that punishes the middle-aged lead for a single, indiscriminate allegation. The Hunt's inscription of inequity hinges on the fictive testimony of six year-old innocent Klara (Annika Wedderkopp), who in a bout of pre-pubescent sexual jealousy, repeats an explicit utterance of her older brother. Her testimony, however off-handed - and even after she contritely disavows her claim, on more than one occasion - is considered unimpeachable by those in her care: children, as we are reminded repeatedly, never lie. It is on this basis, in accordance with this false proposition, that Lucas (Mads Mikkelsen) is stripped of his teaching job and violently ostracized from the film's small-town (Danish) society. There is no place for due process when it comes to protecting society's most vulnerable from transformative trauma - even when this means destroying the life of the innocent, and implicitly, those he holds closest. The Hunt, in other words, imagines the subject of the director's outstanding The Celebration (Festen, 1998), the absolute peak of the Dogme 95 cycle, from the position of the accused rather than that of the accuser.

The Hunt accordingly presents a problem without an easy solution - blindly believing Lucas is no more advisable from the standpoint of crime prevention, even if in this case we know it would lead to a just outcome, which is to say narrative satisfaction. In this same regard, The Hunt finds itself in a difficult position vis–à–vis its dramatic resolution: either injustice continues to obtain or the apparatus that insures it implausibly collapses. Without being too explicit or direct, Vinterberg and Lindholm find a placating means of having it both ways, of having justice restored while maintaining the film's enraging extra-legal (semi-vigilante) apparatus. However imprecise the allegation, and however faulty the film's initial process of verification - the case is made through a series of leading questions that encourage Klara's assent - the accusation can never be unmade; suspicions can never be completely allayed.

As the above no doubt attests, much of The Hunt's strength resides in its scenario, in the extreme injustice that Vinterberg and Lindholm credibly bring to the screen. Of course, The Hunt relies equally on the achievement of its actors, beginning with the Cannes-laureled Mikkelsen, who exquisitely emotes the arch of his excruciating experience just beneath his controlled surface countenance. Admirable too, among others, are Wedderkopp as the troubled Klara, Susse Wold as the school supervisor who spearheads the investigation-cum-persecution and Alexandra Rapaport as Lucas's nascent, non-native love interest. Visually, The Hunt cues into the film's generative performances, with the filmmakers' hand-held framing and accentuating zooms the most common and clichéd of Vinterberg and cinematographer Charlotte Bruus Christensen's storytelling strategies; there is, in this sense, a remnant of The Celebration's appreciable amateurism. Longer establishing set-ups gracefully render the handsome late autumnal setting that provides the site for the film's eponymous activity, a mid-December snow that strikes wonder into the young Klara and the luminous candlelit church where an inebriated Lucas finally confronts his estranged best-friend Theo (Thomas Bo Larsen), Klara's justifiably aggrieved father. On balance, Vinterberg's The Hunt is certainly laudable work.

I would be remiss were I not now also to offer a word or two in appreciation of Johnnie To's very solid Drug War (Du zhan, 2012), the rare title from the 'Milky Way' master to receive proper commercial distribution in the United States (thanks to upstart Well Go USA). The Chinese-Hong Kong production finds To and company back on Election 2's (2006) Mainland, and in similar organized-crime territory, as a team of undercover officers, with the aid of Louis Koo's informant Timmy Choi, seek to bring down a major trans-Asian meth ring. As is true of the director's best work (The Mission, 1999; Exiled, 2006; and Sparrow, 2008), the success of the film is imbricated in the design and actualization of its comedic and dramatic action-centered set-pieces - which is to say in the true substance of To's modular art. Where Drug War really elevates itself above median Milky Way fare, though I would not go so far as to say that this is one of the director's very best, is in the self-reflexivity that the filmmakers infuse in these passages, whether it is Captain Lei and Choi's (Sun Honglei) literal re-playing of an undercover meeting with Lei shifting identities from one to the next - we have here both an emphasis on role-playing and an occasion for rehearsal, therefore - or the appearance of the deaf brothers, whose visual communication provides an ideal object for optical surveillance. Drug War impressively is about the medium-specific dimensions of its undercover and surveillance subjects.

Of course, To's film, a 105-minute Canto-pop variation of HBO's The Wire, is also about the 'war' of its title, an effort that is shown to be futile in the film's final doubling plea for clemency. This comes on the heals of climactic shootout where To's blocking actively encourages confusion, where cop and criminal, following the film's undercover story line, tend to become indistinguishable. Though thematically appropriate at this juncture, this basic lack of clarity will at other times prove Drug War's most notable deficiency.
Posted by Michael J. Anderson at 2:36 PM