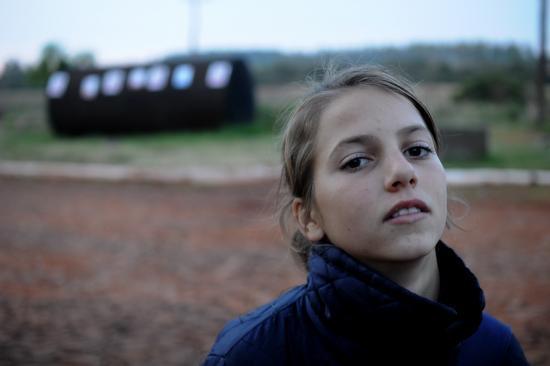 Our current favorite for personal discovery of the 2012 Starz Denver Film Festival, Polish cinematographer and documentarian Wojciech Staroń's Argentinian Lesson (Argentyńska lekcja, 2011), a medium-length, non-fictional follow-up to the filmmaker's 1998 Siberian Lesson, displays an exceptionally deep commitment to the domain of the visual and to the medium's sovereign objective to capture images of poetic grace and grave physical beauty. Staroń's invigorating approach becomes clear from his rain-soaked, elegantly indistinct opening set-up, shot as always by the unseen documentary filmmaker in hand-held 16mm, and his consequent, rhythmically alternating visuals of his travelling wife and two children and of the verdant, overcast and extremely rural Argentinian countryside into which they will temporarily settle - for Staroń's wife's work as a government-dispatched Polish language instructor. At first focusing upon his pre-pubescent son Janek's experience of their trans-Atlantic move, Staroń rapidly shifts his attention to eleven year-old neighbor Marcia Majcher (pictured) - the discovery of this discovery - who over the course of the film's near sixty minutes, in addition to studying Polish and earning top academic marks, builds mud bricks, constructs a kiosk (demonstrating her considerable woodworking skills) and performs manual field labor; that is, Marcia does vastly more than her share to help out her economically disadvantaged nuclear family - more it would seem than even her mother and older brother. Janek serves as a near constant companion for the beautiful young local of Polish descent, as does his invisible cameraman father, who, like his son, seems invariably in awe of the film's female subject. The elder Staroń, to be sure, provides a palpable, if unseen personal presence, thanks not only to the intelligence and sense of feeling behind his lyrical selection of images, but also in his facilitation of Marcia and Janek's rail trip to visit the girl's itinerant laborer father. In their journey, we see her lovely visage behind a foggy train window, underclass child riders whom Marcia notes are travelling without shoes, and finally Marcia's emotional reunion with her father in his shack-like hovel. As Marcia is about to return home with Janek and Wojciech, her father uncharacteristically acknowledges the filmmaker to remind him of how difficult things are for his family. In Staroń's deeply moving Argentinian Lesson, the weight that Marcia's father feels rests squarely on his remarkable daughter's very capable shoulders. 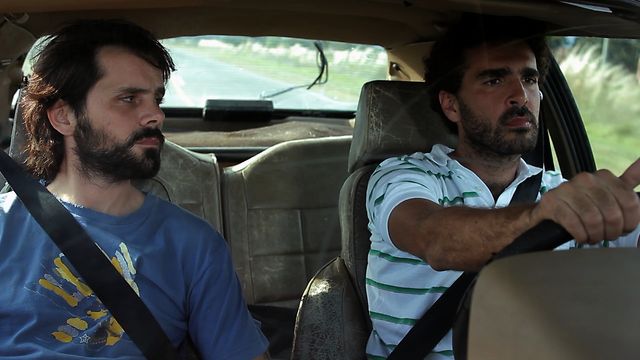 Approaching much of their slacker comedy material in a manner diametrically opposed to Staroń's observational aesthetic, first-time directors Ionathan Klajman (who also authored the screenplay) and Sebastián Dietsch instead display a Wes Anderson-style predilection for explanation in their mostly successful Mar del Plata (2012). Klajman and Dietsch's debut centers on a pair of one-time friends, Joaquin (Pablo G. Pérez, pictured left) and David (Gabriel Zayat, right), who despite their mutual distaste for one another, set off for a weekend vacation in the eponymous resort city. Pérez and Zayat demonstrate their comedic acumen from the opening set-piece, with their uneasy interaction culminating in a CD being tossed out the car window and the steering wheel commandeered in response. Klajman and Dietsch thusly establish the comedic template for Mar del Plata, with Joaquin and David remaining at one another's throats on the beach (as David ungraciously refuses Joaquin use of his boogie board) and at dinner. In the latter interaction, Klajman and Dietsch inaugurate one of their better gags with David confronting a plagiarist dinner guest (Pablo Caramelo), who along with the lead, will set off to a bookstore to prove his innocence - before throwing a punch at his persistent accuser. David, like Joaquin, also finds romance during their weekend getaway, with his first seaside date (with the beautiful Daniela Nirenberg) unfolding within a particularly lengthy split-screen set-up. Though less graceful than the film's longer compositions (including David's one-take approach of Nirenberg's Leticia in a Mar del Plata nightclub), Klajman and Dietsch's hyperactive visuals work in this instance, as they will likewise when the filmmakers project a tennis score in the corner of the screen. Less successful are Joaquin's diegetically disruptive monologues into the camera and Mar del Plata's Instagram flashbacks - though not nearly enough to discount Pérez, Zayat and Caramelo's effective comedic work.

This piece was co-authored by Michael J. Anderson and Lisa K. Broad.