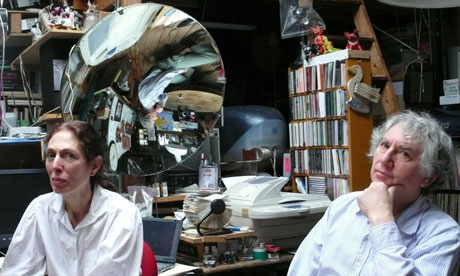 At a time in which the designation of independent cinema suggests a highly formulaic blend of calculated quirkiness and upper-middle class nihilism made for the boutique outfit of a Hollywood studio, which is to say a movement lacking in even the modest virtues of those same studios' big-budget offerings, writer-director Azazel Jacobs' Momma's Man represents a genuine alternative to your Little Miss Sunshine's of our unlucky world, not only for its fully-independent financing and distribution (via true indie Kino International) but for its insistent, actual authenticity. At the most basic level, Jacobs generates his genuineness through his setting, which is not only the New York or Lower East Side of his childhood, but in fact the top-floor loft that his artist parents, Ken and Flo, continue to reside in. And there is Ken and Flo as themselves, co-starring beside Azazel surrogate Mikey (Matt Boren)* in this story of an early thirty-something's inability to leave the world of his childhood once he has returned - following the chance cancellation of his flight. Consider it, as J. Hoberman rightly has, as a Mother (1996, Albert Brooks) for the gen-x set. Or better yet, as an Exterminating Angel (1962, Luis Buñuel), where the first step beyond the apartment's threshold becomes - for a time - an impassible boundary. His inability to leave, as we will see with his cooking sherry inebriation, is more than psychological.

Inside, Mikey settles into his childhood space, thumbing through a book highlighted by the presence of a prized garbage pale kid card and singing the lyrics to the very angry song he long ago penned for his first love. In the latter instance, we hear his father Ken - yes, its that Ken Jacobs for those familiar with the New American cinema^ - screaming for him to keep it down. Indeed, it is at this moment that particularity of Mikey and of course Azazel's childhood becomes clearest, where it becomes entirely foreign to those, this writer included, who grew up in the suburbs, small towns and rural interstices of fly-over country. Unlike Albert Brooks returning to his old room, the consummate American act of revisiting one's childhood, Mikey crawls back up onto his loft bed, pressing his face toward a gap in the exterior wall that opens onto the cold New York street. (My regular viewing companion, Ms. Broad, adeptly noted that Jacobs succeeds here and elsewhere marvellously in registering the bright cold of winter common to all New Yorkers. It is an experience that anyone who has spent anytime in the city will know quite well.) Certainly, Jacobs' accomplishment is located precisely in his recreation of the singularity of his own adolescence, of growing up in this apartment.

Yet, it is an accomplishment that extends beyond the film's undeniable local color to its conception of the space it presents, which is to say its mise-en-scène. His camera peers around corners, through narrow passageways into out of which Ken and Flo make their presence felt in the context of this unified, open space. Jacobs' hand-held DV camerawork favors the tightly framed close-up, the extended take medium follow shot, the aerial composition, and in one of the most compelling of the film, a circular panning shot that locates Mikey in different locations (at different times) along an unbroken, circular trajectory. In this one place, Jacobs recalls the ghosts of Ugetsu (Kenji Mizoguchi, 1953) and the choreographic cinematography that seems anathema to the digital video format. (It still remains for digital medium to show that its up to matching the Japanese master's mise-en-scène, beyond that is Aleksandr Sokurov's impossibly accomplished single Russian Ark take. If it fails to do so it may never claim to be photochemical cinema's equal.) In short, Jacobs' cinema is made to the measure of the loft's architecture - which to reiterate the Mizoguchi comparison or to evoke Ozu is very much the source of a cinema's cultural singularity.

It might not be so surprising then when Jacobs' similarly constructed spaces fail to convince when outside the familiar, comfortable confines of the Lower East Side - when specifically the attention migrates to his wife and young child in California. The same constricted mise-en-scène that is so natural to New York fails to capture the openness of this second location, of living with nature closer at hand (even in America's second largest city). So too does his Californian rival lack the authenticity of his pal Dante and the latter's a Capella rendition of the Indigo Girls which manages to be both endearing and embarrassing. This of course is no criticism of Jacobs or even his Dante, who as much as anyone in Momma's Man reads as authentic to this environment. Jacobs is unambiguously a New York filmmaker. He sees the world, through his camera, as someone who grew up on a bunk in this LES flat.

* Boren's centering performance is one of the better that I have seen this year, while Ken and Flo Jacobs show themselves to be more than up to the task of playing themselves.

^ Significantly, Azazel's film practice deviates greatly from the experimental practice of his father - seen in snatches. A. Jacobs is a narrative filmmaker whose surrogate spends time neither reading "American Fascists" nor listening to reports re the Iraqi Civil War on NPR - though the references place Azazel culturally. He is something less than the intellectual that his parents remain, recognizable in their habitual discussions of Abstract Expressionism or the nature of their own art. Mikey, comparatively, reads comic books and trounces around in his red parka, with the letters U.S.A. emblazoned on the back.
Posted by Michael J. Anderson at 2:43 PM