Nuri Bilge Ceylan's Climates (Iklimler), starring director Ceylan and his wife Ebru, compels its viewer to read the film as auto-biographical by dint of the director's casting of he and his wife as a couple who are in the process of breaking up. Indeed, it doesn't take Ceylan long to depict the split -- the director's character Isa, a photographer, initiates the parting following a session photographing ruins with his bored girlfriend in tow, and a dinner party where the latter laughs hysterically after Isa attempts some small-talk with the host. Following a dream sequence of Ebru's Bahar, where she is buried in sand by Isa after he tells her that he loves her, the male lead tells his girlfriend that he believes they should split up in a sequence where we first see him rehearsing and that we see the actual communication, without realizing that she is listening (Nuri blocks the scene to hide Bahar's participation). Shortly thereafter, director Ceylan shows Bahar leaving and it would seem that the film will continue to follow her post break-up.

However, in the next scene it is Isa who returns as the subject. Subsequently, Climates follows the male lead through its second act as he returns to his professorial job, and later, bumps into a couple of friends in a book store. After the chance meeting, Isa arrives at the woman's flat to find to find her parting ways with her boyfriend for the evening. The woman, Serap, lets him in and the pair soon engage in violent floor-play that concludes with Isa force-feeding the woman a stale nut on the floor in the midst of copulation. As such, Ceylan identifies the sadism of his male lead that will again manifest itself in the third and final act when Isa travels to a distant locale where he discovers his ex is working. 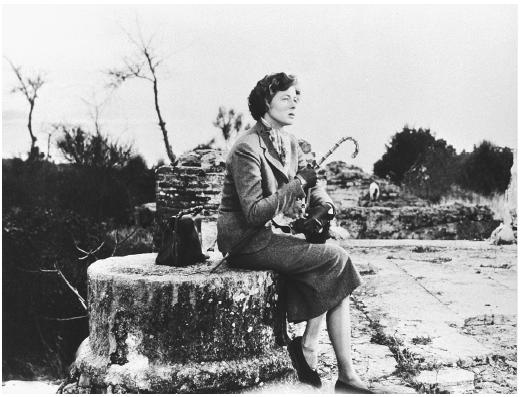 At this juncture, it might be worth noting that Climates operates as a sort of revisionist Turkish Voyage in Italy (1954) to the extent that it also follows a couple, with the director's real-life wife playing the female lead, as they part and reunite while traveling through the director's homeland. The revisionism comes in as the couple does not ultimately reunite, though they do get back together for a night of passion. This moment is filmed in a series of close-ups that obscure the couples' mouths, making the emotional component unclear. That Nuri uncharacteristically uses a modernist score during this passage further marks its debt to L'Eclisse (1962), as does also the film's concluding dissolve, where Ebru disappears leaving only the mosque behind her. Yet, it is less Antonioni than Rossellini who appears to be the picture's source -- in fact, as Andrew Sarris once remarked quite rightly, Rossellini-ennui preceded Antonioni-ennui -- provided the opening setting in the ruins (transposing a key scene from Voyage), the couple's reunion, and that film's similar autobiographical component.

That Rossellini and Bergman, however, were nearing the end of their relationship during that film -- where the couple does stay together, thanks to "miracle" that did not occur outside the film -- while Nuri and Ebru remain together following a film where they split, does seem to situate Climates as reversal of the earlier, epochal modernist text. In fact, Climates is built upon these junctures of expectation, be it the shifting focalization, the scene where he tries to get back together with her while they sit in a van, but are repeatedly interrupted by crew-persons loading the vehicle, or the concluding divergence of the two characters. To be sure, Climates does echo the visual rhetoric of modernism, utilizing as it does long takes, to say nothing of its articulation of ennui, but even in Nuri's compositions we can see a reappropriation of modernist form for his irreverent ends: particularly revealing is the sex scene where Isa and Serap creep closer and closer to the camera -- and to the aforementioned nut -- or the above-noted scene where we are made aware that Isa is breaking up with Bahar only after the fact, as if to mute its impact. 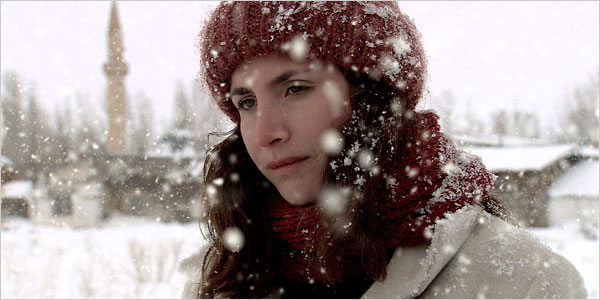 Yet, it is not simply the director's ironic blocking, but his use of high-definition video that separates it from its high-modernist sources. This new technology provides both an infinite depth of field that is well-suited to the picture's alienated subject matter, as it does a tactility that would seem impossible without it: the snowflakes that fall at the end of the film, for instance, come closer to the camera than would ever seem possible; and the flakes shot out the window have more definition than film could ever muster. Moreover, the film's usage of yellow (during the sexually-explicit sequence) possesses a truly preternatural character. And indeed in its very adaptability, Ceylan manipulates his compositions of dark skies to match the psychology of the film's ruminative male lead. Then again, Climates cuts against an obvious reading of the film as a sequence of landscapes -- and climates -- that convey the pair's collapsing relationship as they break up in a summer paradise and tentatively get back together in a harsh winter clime. (In fact, even the noted sky-scape nearly precedes the couple's reunion.)

All of this is to say that Climates is post-modern in the sense that it stakes out new territory within the modernist framework that it expressly positions itself within. It is a film that repeatedly shifts the epistemological basis for the images -- the film undercuts itself -- often connoting irony in the process. Still, Climates never fails to express a concise worldview, which perhaps even the director's biography belies: that life is filled with sadness and that relationships don't last. This proposition, however, given its evident incongruity to with his biography, has not mediated the director's need to express himself, which he has done in unmistakably first-person form, whether or not it adheres to what we know of his personal life.

Lest it is not yet clear, Climates is one of the year's most inventive art films, and indeed one its best as well.
Posted by Michael J. Anderson at 5:57 PM