New Film: Borat, For Your Consideration & The Queen

There is no easier way to kill a discussion about a film's merits than to call it "funny." To use this description is to stop the conversation, much like making an accusation of "racism" will in most cases end further debate. Larry Charles' Borat: Cultural Learnings of America for Make Benefit Glorious Nation of Kazakhstan, the brainchild of co-writer and titular star Sacha Baron Cohen, is in generous measure both of these, though the latter is certainly directed toward a presumably higher purpose: namely, to reveal that many Americans harbor innate racist and anti-Semitic sympathies. Of course, the problem is that Cohen attempts to make his case for America's equity with his portrait of a fictionalized Kazakhstan -- read: the Muslim world divorced of a racial component -- on the basis of some good 'ole boy rodeo patrons, a Humvee dealer, drunken frat boys, and a Southern Pentecostal assembly. Not that any of the above actually advocated the eradication of Israel as has the very real Ahmadinejad regime in Iran, but why let perspective get in the way of an anti-American polemic, even if it supposes that his generic Islamic state has nothing to learn from the U. S. of A.

Ultimately, Borat trades on -- or better yet courts -- specific stereotypes to prove the picture's pedagogical point: New Yorkers are rude, feminists are humorless, Southerners are overly polite... and racist, Black youths hang out shooting dice (though they are far more welcoming than the snooty hotel proprietors he will ambush in the next scene) and so forth. In order to achieve their effect, Charles and Cohen often cut following very short segments -- its interesting and perhaps telling that so little came of the Bob Barr encounter, for instance -- which respectively emit varying degrees of staging. 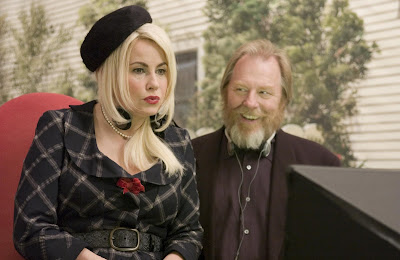 I wish the same could be said for Christopher Guest's For Your Consideration -- even if it would have meant sitting through another facile polemic. Unfortunately, For Your Consideration is far less funny than Borat, so long as you don't find limply anachronistic satire of a Hollywood that never existed hilarious. (One thing that it does have in common with Charles' and Cohen's picture is its very calculated attempt to avoid offending America's costal cultural elite.) It's one thing, surely, to be on the margins of the local theatre, dog show or folk music cultures; it's quite another to represent outsiders to a culture that doesn't look little like anything we know. My viewing companion -- the oft-mentioned Ms. Broad -- pondered whether perhaps there was something meta and even avant-garde about this send-up, pointing to the out-of-place characters and to the picture's visual echoes of the ultra low budget film-within-the-film. Perhaps, though even in this respect it falls short: no other comedy this year can match Albert Brooks' Looking for Comedy in the Muslim World when it comes to experimenting with less than funny material. 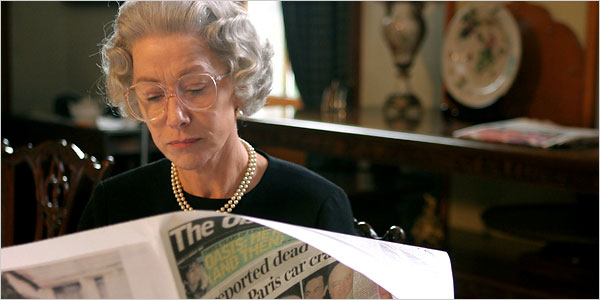 So what then is the best 'funny' English language film of the year? Well, a film about the Royal Family's poor response to the accidental death of Princess Diana of course! Stephen Frears' new career high, The Queen, from Peter Morgan's exceptional screenplay, sustains a consistently light tone in spite of its very real tragic content. Opening with Tony Blair's (Michael Sheen in one of many stand-out supporting performances) landslide 1997 election on the eve of the Princess's sudden death, The Queen is as much about his relation to the Windsor's in this time of extreme friction as it is about the Queen (an Oscar-worthy Helen Mirren) herself. In fact, The Queen is no less polemical than the aforementioned Borat in its excessive valorization of the Prime Minister, though it is the absence of this quality in other respects that finally ennobles the picture.


At the same time, The Queen is not all nuance when it comes to its depiction of the House of Windsor, either. To do so would be to jeopardize its claims of authenticity, provided after all that Prince Charles (Alex Jennings) is the next in line to Elizabeth II. Here, he is every bit as hapless as one has come to expect from the real-life antics of the über-unpopular heir, though Frears does make the point to show his genuine grief and apparent concern for his sons when he is confronted with the news. Less inclined to these feelings are Prince Philip (James Cromwell in another strong performance), who insists that the Princess's public and private personas were very different indeed and the Queen Mother (Sylvia Syms), who along with Philip demands that Elizabeth follow the protocol of her throne, in dealing with Diana's death.

In the end, Elizabeth, in opposition to her own better judgment -- that is, in her estimation of the British people whom she has ruled since the early 1950s -- and the traditions of the crown, acquiesces to public sympathy, which in Frears' film is less a triumph of populist justice than a personal defeat for a woman who has far more faith in the British people than perhaps she should. On the other hand, Frears shows himself to be precisely what Elizabeth imagines of her subects; his directorial choices often display the same restraint that the monarch incorrectly imputed to the British public: at the very moment of Elizabeth's fullest outpouring of emotion, Frears films the weeping Queen from behind.

Indeed, one of the surprising accomplishments of The Queen is its success in humanizing Elizabeth, which to an American viewer like myself, is a need for which I had no conception. But it is this very process, that is in helping the spectator to understand why the Windsors' fumbled Diana's death to the degree that they did -- without fully excusing it, to be sure -- that marks the unique contribution of Frears' film. As to its ability to reveal the latent royalist sympathies of one American spectator and amateur critic, I can only say that in this respect, it was also successful.
Posted by Michael J. Anderson at 12:16 AM

I'm concerned Mike. We should put in a call to hell and make sure it's still nice and warm down there...

Hey, just stumbled across your blog while googling Rosenbaum. I love your writing. Keep up the solid work!

Mr. Caution, thank you for your kind words. I actually saw Mr. Rosenbaum speak this past Saturday. Very interesting indeed.

And Matt, it is kind of eery isn't it? I suppose the next big litmus test will be "Apocalypto" -- though it might be presuming too much to assume that either one of us is going to see it... Even bigger, perhaps, will be "Letters from Iwo Jima," which apropos of nothing, the National Board of Review named its best film of the year earlier today.

Too bad the film was unable to bring out this crucial background to the story.

Both Diana and her brother, Charles Spencer, suffered from Borderline Personality Disorder caused by their mother's abandoning them as young children.  A google search reveals that Diana is considered a case study in BPD by mental health professionals.

For Charles Spencer, BPD meant insatiable sexual promiscuity (his wife was divorcing him at the time of Diana's death).

For Diana, BPD meant intense insecurity and insatiable need for attention and affection which even the best husband could never fulfill.

From a BPD perspective, it's clear that the Royal family did not cause her "problems". Rather, she brought her multiple issues into the marriage, and the Royal family was hapless to deal with them.

Her illness, untreated, sowed the seeds of her fast and unstable lifestyle, and sadly, her tragic fate.

Regarding your observation of For Your Consideration, "No other comedy this year can match Albert Brooks' Looking for Comedy in the Muslim World when it comes to experimenting with less than funny material," it's interesting to note both pictures were financed by the same man: billionaire Steve Bing of Shangri-La Entertainment, also backer of Robert Zemeckis' Polar Express and Beowulf, as well as andscreenwriter of Kangaroo Jack.