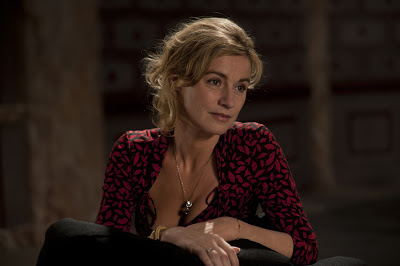 Seated in a marble-walled home cinema adorned with rows of plush black couches and over-sized armchairs, twelve French actors, each identified by his or her real name in a previous series of phone calls that convey the tragic news of friend and colleague Antoine d'Anthac's (Denis Podalydès) untimely death, respond to a televised performance of Eurydice, screened for their professional scrutiny as a sort of last will and testament by the deceased playwright. (As a second round of introductions during Antoine's pre-screening message to the assembled actors makes clear, all twelve worked with the director - within the fictional world of the film, that is - in at least one of his two prior stagings of the aforesaid play.) Michel Piccoli is the first to speak, repeating an audible on-screen line and then adding a second as he glances back at the high-definition set in a balanced, multi-figural medium close-up. As the scene continues off screen, Pierre Arditi turns to Piccoli as he phrases his own dialogue (as Orpheé) in response to his fictional father. Following another cutaway to the screen that the filmmakers frame with an elegant marble balustrade that functions equally as a found proscenium, Arditi and Piccoli continue in their remembered reproduction. With the arrival of the eponymous Eurydice (Vimala Pons in the filmed play), Antoine's two generations of female lead, Sabine Azéma and Anne Consigny (pictured), take turns repeating the heroine's opening line - and then reacting to their shared mother, Anne Duperey - as the spontaneous performance begins to to spread among the broader assembly.

As the staged version progresses on and off camera, Jean-Noël Brouté and then Azéma and Ardit (see below), stand to deliver their dialogue for their seated brethren. The latter two, Antoine's first Eurydice and Orpheé, accordingly turn to face one another as their intimate conversation continues - even as the rest of the room persists in watching the (now off-screen) televised version. As director Alain Resnais stages his two frequent collaborators on either edge of his CinemaScope frame - Azéma has been married to the director since 1998 - Mark Snow's orchestral score provides minor-key support for the suddenly emergent feeling emanating from the former legit leads. With Resnais and cinematographer Eric Gautier's camera finding the film's other Eurydice, Consigny's Orpheé, Lambert Wilson, rises from his former rear-ground position to join the whispering actress for a tender, face-to-face exchange. You Ain't Seen Nothin' Yet (Vous n'avez encore rien vu, 2012), in other words, hastens to divide into its two previous casts, which is to say, into the two worlds of experience that animate the thespians' responses to the filmed play-within-the-film. 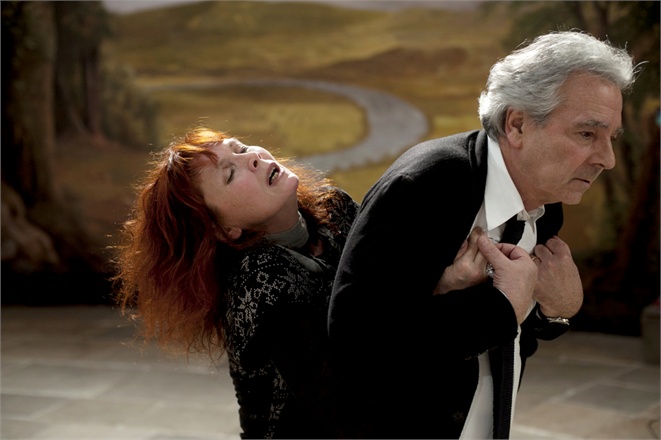 At this same first-act juncture, Resnais's parallel performances begin to spread into the adjacent spaces of Antoine's Greek-inspired interior. A rear-projected train passes behind Azéma's Eurydice as the stagecraft of the earlier production starts to seep into Resnais's mise en scène. A brief cutaway to the on-screen performance is followed immediately by Azéma and Arditi return to the screening space in what will prove an early indication of the film's ontologically unstable mapping of memory, fantasy and external reality all. Indeed, as the increasingly off-screen contemporary play presses on, its impromptu re-imaginings by the assembled actors will occur not only before the screen or in corners of the large marble hall, but on a train platform and in a separate set of Marseilles bedrooms that disclose the differing, period-determined design strategies employed for the Azéma-Arditi and the Consigny-Lambert productions.

In each of these latter spaces, just as in his prior home-cinema exchanges, Resnais reproduces the shared memories of his two generations of performers, the histories that they lived in common by virtue of their co-inhabited times and places. As a subject for his fictional cinema, collective memory extends back to the beginning - and beyond (see Night and Fog, 1955; and Toute la mémoire du monde, 1956) - to the diagramming of the conversations, copulation and catastrophe of Hiroshima mon amour (1959) and, in negative, to the failure to remember a possible shared past that provides the plot for the filmmaker's follow-up, Last Year at Marienbad (1961). In the particular case of You Ain't Seen Nothin' Yet, Resnais gestures toward the parallel structure of his more recent stage-adapted masterwork, Private Fears in Public Places (2006), in rendering the overlapping personal histories of Antoine's successive casts in a series of cross-cut set-pieces that alternately push forward the anchoring Eurydice plot-line.

Consummately and constantly a cinema of memory and of the stage - the nonagenarian director's latest is in this sense alone a signature manifestation of his authorial identity - You Ain't Seen Nothin' Yet also adventurously brings to bear strategies drawn from an at times less reputable and much earlier film art, whether it is the aforementioned rear-projection, irises, Resnais's use of intertitles, his deployment of split-screen to showcase Mathieu Amalric (front row center) in both of the bedroom settings, or his predilection for allowing characters to dissolve from view once they've delivered their lines. Resnais calls on the fantastic language of film specifically to externalize and reclaim lost time. Then again, it will be a final act coup de théâtre, a sudden dramatic turn of events, that will push You Ain't Seen Nothin' Yet furthest beyond the everyday. With regard to this last narrative twist, suffice it to say that whatever the filmmaker in fact wishes or allows the viewer to believe with this revelation - and there is justification within the world of the narrative - he introduces a both/and logic, at least conceptually, that has long been the Marienbad filmmaker's purview. In Aristotelian terms, You Ain't Seen Nothin' Yet manages to be both comedy and drama in its closing moments, however unsatisfying this may prove to many a spectator.

Free in its employment of artifice (see also the expressionistic, Oliveiraesque swirling doorway set-piece that greets each of the villa's visitors) and in its willingness to open itself up to contradiction, You Ain't Seen Nothin' Yet is a work of advanced age in the best sense - and one, much unlike the substantially younger Michael Haneke's parasitic Amour (2012), which never succumbs to an act of loathing or pity for the experience. Though his actors are now past the ages of the characters they are portray, the spontaneous joy with which they throw themselves into their performances makes for a very different (and much richer) experience of encroaching mortality than Haneke's unsparing Palme d'Or. Of course, Resnais's semi-biographical 2012 Cannes debut - the filmmaker first attended Jean Anouilh's Eurydice seventy years ago and has been involved in around twenty of the source playwright's productions - is much more about life, and especially a life consumed by a passion for art, than it is death. Few subjects could be more appropriate to what is almost certain to prove one of the final masterstrokes of the nouvelle vague.

I would like to thank my viewing companion (and fellow Resnais lover) Lisa K. Broad for her significant contributions to this piece. Kino Lorber is doing the essential work of distributing the film in the United States. Upcoming dates include a July 24th screening at the Durango 9 in Durango, Colorado and July 26-27th screenings at the Museum of Fine Arts, Boston.
Posted by Michael J. Anderson at 10:05 PM