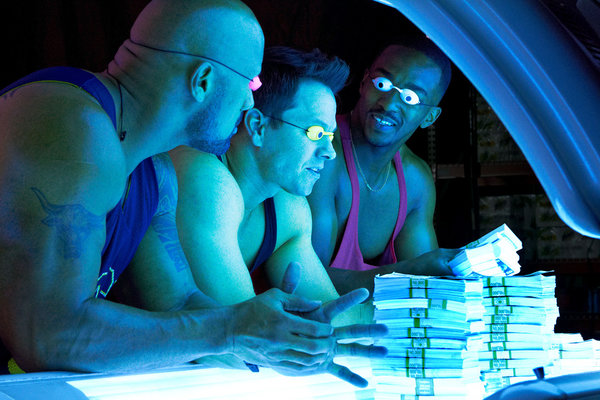 A stupendously captivating, admirably self-aware piece of attention-oriented action-hack cinema, Michael Bay's Pain & Gain (2013), from Christopher Markus and Steven McFeely's adaptation of Pete Collins's eponymous original, promises and delivers a self-deprecating summation of the filmmaker's much maligned auteurship: Pain & Gain produces a metaphor, in its moron-driven, steroid-fueled blunder, for Bay's deliriously dismissed art (with Dwayne "The Rock" Johnson's casting crystallizing the 1995-set film's conspicuous self-consciousness). Mark Wahlberg's "doer" and convert to the fitness faith, Daniel Lugo, emerges as the ring-leader for a dimly conceived abduction plot that at least for a period propels Lugo, Johnson's Christian rock-loving, coke-head Paul Doyle - Pain & Gain is reasonably certain to be the only film this or any year to reference gospel glam-rockers Stryper - and Anthony Mackie's modestly endowed Adrain Doorbal into a previously unattainable affluence. Lugo, despite the ill-gotten and comically unstable source for his new life, remains certain that his rise out of sweatpants is a karmic conferral of justice, the coming of what is for the film an ambiguous American dream. Wahlberg's first lead professes his belief in this cosmic form of justice as he participates in a shifting voice-over that will include not only the criminal trio, but also their victim Victor Kershaw - Tony Shalhoub's archly unsympathetic delicatessen mogul - and Ed Harris's private dick, Ed Du Bois.  (Pain & Gain's principle performances are uniformly worthy of accommodation.) In so doing, that is in producing a multi-voiced, over-dubbed narration, Bay constructs a low-brow analogy to the amorphous commentary of the cinema of Criterion label-mate, Terrence Malick. 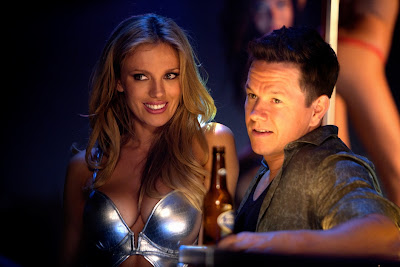 Pain & Gain is also a film of bodies, or better still, artificially perfected anatomies, whether they are the result of injection, augmentation - one character's implants provide the investigative key to identifying her dissected form - or even manufacture, as the film's gay sex-toy warehouse intimates. (By this latter setting, Bay bluntly sends up his weightlifters' obvious, outwardly macho masculinity.) Of course, they are also abused bodies: steroids and narcotics are consumed once again; Doyle loses a toe - which comically becomes a canine chew-toy - and is covered in green security paint, all during the same a police shootout; and the severed hands of a wealthy couple are put on a grill in an effort to eliminate any identifying evidence. In this latter moment, Pain & Gain provides its most pitch-black punctum, supported by one of the film's relatively frequent on-screen titles: as the spectator is reminded, "this is still a true story." As many critics have observed, Pain & Gain indeed provides a South Floridan twist on the Coen brothers' Fargo (1996), borrowing everything from its real-world inspiration to its amateur abduction plot and even its chopped extremities. This latter trope also recalls Showtime's "Dexter," which provides one of the more pronounced examples of recent Miami-based screen art, alongside F/X's even more germane, plastic surgery-centered "Nip/Tuck," Michael Mann's magnificent Miami Vice (2006), and in a spiritual sense, the Gulf Coast-situated Spring Breakers (2012) of more recent vintage. Nocturnally bathed in the blue neon that illuminates South Florida's freeways from below, the Miami screen narrative is one of absolute corporeal excess and artificial enhancement - much like the prototypical Bay picture itself.
Posted by Michael J. Anderson at 4:32 PM