The above films represent the best new commercial releases and festival premieres that I first viewed in two thousand-twelve. Excluded are those commercially released features that I screened previously - mostly at the 2011 New York Film Festival. For those choices, see last year's selection of the Ten Best Films of 2011. Of course, I would be remiss were I not to mention the large swath of 2012 premieres, which have not yet had their local festival or commercial debuts. Please assume that my exclusions of films such as Amour, Leviathan, Like Someone in Love, Neighbouring Sounds, Night Across the Street, You Ain't Seen Nothing Yet, and Zero Dark Thirty reflect my inability to see the films before year's end, and do not constitute intentional slights.

However, I do not wish my readers to assume the same about The Avengers, The Dark Knight Rises and The Master - three films that impassioned audiences and/or critics, but which left me greatly underwhelmed. As for the lauded Argo, Beasts of the Southern Wild, Cosmopolis, Looper and Magic Mike, while I found all five to be creditable works of the English-language cinema, none felt quite list-worthy to me. I might be inclined to say the same for Paul W. S. Anderson's Resident Evil: Retribution, were its substantial virtues not overlooked by most critics. So for it, let me offer the 'best use of 3-D' garland and one last 'honorable mention' citation. 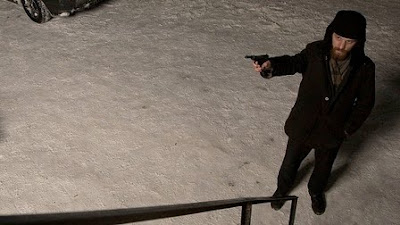 Finally, there are my nominations for film event and screening of the year: Sight & Sound's commendable selection of Vertigo (1958) as "the greatest film of all-time"; and a private, six-person screening of the film in a pristine, 1983 re-release print, a matter of weeks before the announcement of the poll results. In almost any year - and certainly in 2012 - seeing Vertigo under these extraordinary circumstances would qualify as my single best cinematic experience.
Posted by Michael J. Anderson at 12:14 PM

A superb list, with a few features I'll be certain to track down! I haven't seen HERE AND THERE, DJANGO or any of the listed 2011 features...

I will say that, although I am normally fully onboard with Wes Anderson, MOONRISE KINGDOM sat a little wonky with me. It has some of the greatest, most bombastic moments in his admirable filmography, but I wasn't blown away by the 3rd act - all that said, I've only seen it once, and I'm still thinking about it, so inclusion on my own list is still a possibility, but likely in the lower reaches...