One of three 'Best Animated Feature' nominations, Gil Kenan's Monster House is without question the underdog of the group (even with its citation by the mighty Florida Film Critics' Circle) in spite of its association with executive producers Steven Spielberg and Robert Zemeckis. Never mind, Monster House is one of the better Hollywood features of 2006 -- animated or otherwise -- containing both assured classical direction from thirty year-old first-time director Kenan and one of the year's finest screenplays, authored by Dan Harmon, Rob Schrab and Pamela Pettler. Regarding the latter, Monster House sustains its admirable sense of humor throughout, generating a number of the funniest lines of 2006: my favorite has to be love interest Jenny to pubescent pals D.J. and Chowder, "are you two mentally challenged? If you are, I'm certified to teach you baseball." Others demonstrate expert delivery by the film's actors (for instance the exchange, "what's your problem?" "Puberty, and I'm having lots and lots of puberty"; or Kevin James' overweight officer, "I was in the forest wrestling with a bearclaw. I was eating a donut!") in additon to more generally off-beat humor -- Jared Hess' video game nerd opines "you make me wanna vomit in some tin foil and eat it," while a sign advertising a development exclaims "we drained the lake!"

At this point, it might be worth noting that Monster House utilizes motion capture technology (cf. Zemeckis' The Polar Express, 2004), where the animation is layered over live performances. Indeed, in moments such as D.J.'s attempt to step lightly as he crosses the "monster house," the benefits of the technology over traditional animation become clear -- we see the light pressure that the boy puts on the ball of his foot. Then again, Monster House, as its title should make obvious, very much trades on animation's ability to make the impossible possible, bringing to life the titular structure in a picture that might be best described as Mon Oncle meets The Goonies, with more than a touch of The Incredibles (2004) thrown in.

Of course, in Kenan's hands, Monster House is far more than high-concept 3D animation; Monster House is first rate Hollywood pop filmmaking, manifesting a highly creative manipulation of a classical point-of-view structure. Among other highlights, one of the most inventive examples is D.J.'s point-of-view as he is felled by Mr. Nebbercracker, who collapses as he is choking the boy. Likewise, Kenan's introduction of the house as a malevolent creature also represents a moment of acute directorial skill: the boy collapses on his bed in the left side of the frame, beside a window overlooking the house. Slowly, we see a black spectral sheet seep through the window before the room turns to crimson.

Monster House also includes moments of exceeding tension, many of which are quite frightening -- for instance, D.J. perilously swinging on a cable over the carnivorous house. Indeed, Monster House is not exactly a children's movie -- especially when one considers the sophisticated humor -- even as its presumed target audience (my guess boys around ten years of age give or take a year or two) might not be so quick to see animation of this sort. Nevertheless, Monster House deserves a wider audience than its relatively underwhelming $73 million box office tally indicates (fellow nominees Happy Feet and Cars have grossed two-and-a-half and three and-a-half times that number respectively). Whether a nomination will deliver greater popularity in home video -- particularly among adults -- remains to be seen. 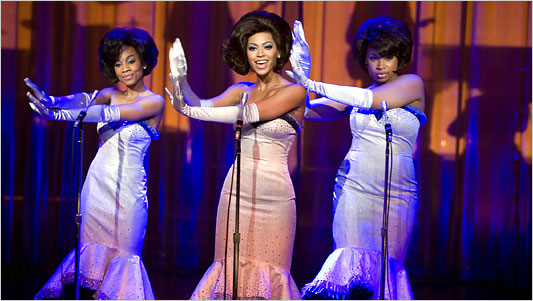 In an entirely different strata of Oscar co-dependence, Bill Condon's Dreamgirls was anointed 2006's de facto 'best picture' well before critics, let alone audiences had the opportunity to see the director's adaptation of the 1981 musical. If pundits were basing their hopes on the earlier Broadway incarnation, they have not been disappointed, assuming of course that these analysts expected a film bearing the unmistakable texture of the early 1980s (call it Muppets Take Manhattan with a Motown twist). Remarkably, Condon has succeeded -- or failed ? -- in producing a film version that does nothing to modernize the story; had say Herbert Ross made the film on the heels of Footloose, I'm not so sure the end product would have been any different.

Obviously, Dreamgirls circa 1985 would not have included the startlingly beautiful Beyoncé Knowles and her occasional attempts at emoting or the Oprah-orgasmic performance of Jennifer Hudson (who remains the prohibitive favorite to walk away with an Oscar statuette next month) though perhaps Eddie Murphy could still have been cajoled. Nevertheless, what we have is a film that is fabulous for about the fifteen minutes of back-to-back-to-back musical numbers, before Condon's televisual handling of the material really becomes apparent. Ultimately, Dreamgirls was made for an Oscar telecast montage of high points, which the film's failure to secure a 'best picture' nomination has eliminated. In that format, Dreamgirls would have been tough to beat. As a feature-length film, less so.
Posted by Michael J. Anderson at 10:46 PM