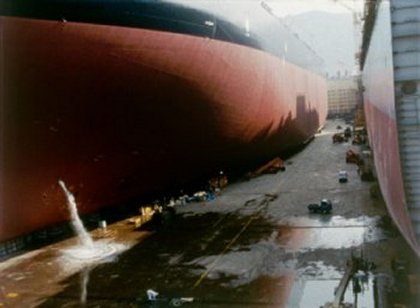 According to the Village Voice's J. Hoberman, doyen of the rapidly contracting paid community of New York film critics, Peter Hutton's silent, 16mm At Sea (2004-7) "is as close as [the filmmaker's] ever come to narrative," focusing as it does on "the biography of a giant container ship." Being myself a novice to Hutton's work, I defer to Hoberman's assessment, though it is equally important to note that At Sea's narrative operates more to inscribe a politics than it does than it does to tell a story in the traditional sense. This may be hardly worth mentioning for a film shot and projected in complete silence that lacks any discernible chronology within its three discrete sequences.

The first of these represents the construction of the aforesaid vessel in a Korean shipyard. Here, Hutton introduces the strategy that will guide his work - namely the reframing of spectatorial perception enacted through minor changes in his mise-en-scène. In this earliest passage, figure movement commonly achieves this end, as when suddenly visible, infinitesimally small persons retroactively confirm the astonishing scale of the object (the container ship) viewed. Similar early highlights include the cascade of sparks - issuing from the ship's welding - that elegantly arc to the ground, or the appearance of miniature human figures moving up a Sol Lewitt-like linear grid. In each of these moments, the film's silence procures its unique, poetic effect - as again for example the sparks, whose lack of an auditory accent highlights their uncommon beauty. Of course, the general absence of sound more importantly denies us an immediate framework through which we are able to orientate ourselves to the image - thereby making his sudden reveals of scale possible. The act of orientation becomes exclusively visual.

If part one presents the ship's making, part two depicts its life at sea, its life of labor. Hutton begins the sequence with an overhead of the ship and its multi-colored semi trailers as the ship passes under a bridge. (This visual is conspicuously consonant with the Museum of Modern Art's recent "Color Chart" show.) As the ship crosses under, rain and ice streaming down the lens (presumably), the sudden appearance of windshield wipers discloses an additional glass mediation beyond that which has been apparent previously. Once out to see, Hutton emphasizes his ship's multi-colored contents in contrast with the rich cobalt's of the water; we see a cloudy sunset with the tangerine sky opposed to the indigo water; and in a moment pregnant with late day light, the ship's rainbow surface becomes a gold-hued monochromatic field.

With the continued lack of sound, Hutton's imagery continues to de-emphasize the film's documentary aspect, highlighting instead its purely graphic properties, as when we see the horizon line rising and falling across the frame of the static, ship-moored camera placement. Equally noteworthy is Hutton's sudden switch to black-and-white which does not become unmistakable until the filmmaker cuts out to a glorious long composition of sky and sea with thin, horizontal zips of white crossing the liquid field. In total, At Sea is an exceptionally beautifully work of seascape filmmaking.

Black-and-white continues to be a significant motif in the film's final third, wherein Hutton frames a/the container ship grounded in the muddy deltas of Bangladesh. However, in this instance, the technique connotes Stieglitz-school, socially-conscious photography thereby miming the passage's obvious critique: namely of this place's repellent social conditions. Here, the astonishment procured by the juxtaposition of scale during its production has become a signifier of human insignificance and futility with the exceptionally poor, barefoot workers dwarfed by the rusty, seemingly obsolete vessel. They are forced to act as scavengers in this field of detritus; the consequences of production to the third world are manifest.

As the film closes, Hutton allows his under-class human subjects to look into the camera, this undercutting the spectator's presumed sense of "invulnerability" (cf. Noël Burch). In this way, the film's first world spectators lose their insulation from the real consequences of its market realities.