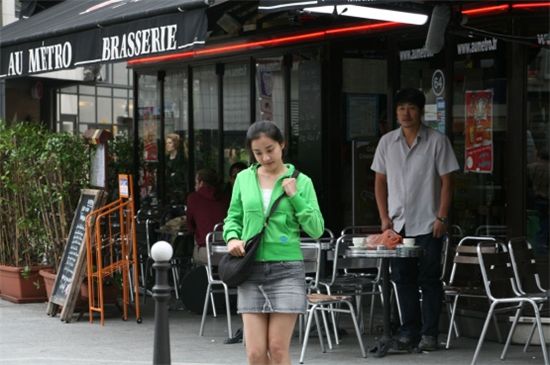 Warning: the following post contains spoilers.
Writer-director Hong Sang-soo's Night and Day (Bam gua nat) furnishes incontrovertible evidence that rumors of Eric Rohmer's retirement have been greatly exaggerated. As the third film made by an Asian master in the past two years to engage directly with French film history - along with Hou's Flight of the Red Balloon and Johnnie To's Sparrow - Hong's latest dispenses with the Korean director's trademark two-part, 'twice-told' structures* for Rohmer's diaristic narrative pattern, replete with dated intertitles that are graphically-identical to those utilized in the director's 1986 masterpiece, The Green Ray/Summer. Indeed, Rohmer's Marie Rivière starrer represents one of Night and Day's most conscious sources with its initial August in Paris locale, protagonist Seong-nam's (Kim Yeong-ho) propensity to sob^, and most significantly, object of desire Yu-jeong's (Park Eun-hye) declaration - following a framing emphasizing the late-day sun - that she now knows her feelings. Of course, contrary to Rohmer's work, Hong fixates on a male lead.

In this respect, Night and Day is closer to the French maestro's Claire's Knee (1970), recapitulating that film's character geometry: in both instances, a male protagonist spends time apart from his lover (fiancee and wife, respectively) wherein he comes into contact with an old acquaintance and two younger romantic prospects. Likewise, Hong matches the earlier picture's fetishistic emphasis on a single feature of his female protagonist's anatomy - in this case her feet rather than the eponymous knee. While Jean-Claude Brilay finds satisfaction in touching the latter, Seong-nam dreams of sucking Yu-jeong's toes, which does nothing to satiate his desire. In fact, it precedes his romantic confrontation of the more attractive of his sexual prospects.

This facing contradicts his earlier insistence to old flame Min-seon (Kim Yu-jin) that they resist the temptation to cheat on their spouses, quoting the Biblical passage that it is better to cut off your hand or gouge out your eye if either causes you to sin, rather than to enter hell whole. Seong-nam claims to read the Bible as if it is history, though a later prayer (or napping) session in a French church compels the lead to ask forgiveness of a North Korean he has offended; then again he soon embarrasses his political rival anew in a bout of arm wrestling. (Suffice it to say that as is often the case with Hong, Night and Day is routinely quite funny.) In the film's stew of Christian theology, sensuality and comedy, therefore - to say nothing of its characters' frequent falsehoods, as Lisa K. Broad has perceptively noted - the director's latest also compares strongly to Rohmer's My Night at Maud's (1969).

Interestingly it is very much on the level of theology that Rohmer and Hong differ. Whereas Rohmer's Christianity demonstrates a Jansenist tendancy - that sect's predestinarian aspect is articulated through the Frenchman's tales of tempted protagonists who return to their original lovers - for Hong, free will remains paramount, and actions continually produce unforeseen consequences. Former lover Min-seon, for instance, claims to have had six abortions secretly during their affair and after being rejected anew by Seong-nam, commits suicide; Yu-jeong tells a departing Seong-nam that she might be pregnant. Though Seong-nam will find his way back to his wife, he will not only experience temptation, as does Jean-Louis Trintignant in My Night at Maud's, but will actively, aggressively pursue the object of desire, whom he will leave after one of the aforesaid lies. Hong does not merely ape Rohmer on the level of theology, but instead offers a plausible counter-position.

A final point of comparison with My Night at Maud's is Night and Day's frequent use of zooms, rhyming with the earlier film's telephoto exterior framings. Of course, Hong's own A Tale of Cinema (2005) provides the more direct source; yet unlike A Tale of Cinema, where the style seems to organically reflect its film's student filmmaking subject, in Night and Day the technique feels more ersatz, as does Hong's general utilizations of long take, often static compositions. Of course, Rohmer himself confines his technique to a decoupage deriving from Hollywood sources, even if it is carefully manipulated to reflect the film's content. In this respect, Hong's reliance on a relatively uncalibrated style fits the film's principle inspiration.

*On the level of theme, this doubleness is still present in the coexistence of Korea and its expatriot community in Paris. Seong-nam's phone conversations with his wife make this point most explicitly, figuring a population divided that is further registered in the presence of the North Korean player.
^In the gender reversal of the sobbing, Night and Day reads as a critique, as does so much of Hong's cinema, of the Korean male. The same can certainly said of the protagonist's series of lovers and his serial mistreatment of women. Of course, the Korean female, in her frequenty duplicity, does not come off much better.
Posted by Michael J. Anderson at 8:53 PM

I was extremely pleased to find this page. I wanted to thank you for your time due to this wonderful read!! I definitely liked every bit of it and i also have you book marked to check out new information on your site. judi bola