Figure 1.  Scenes of the Nativity.  11th century.
The fundamental problem posed by narrative representations in icons seems simple enough: if icons are objects of veneration capable of effecting intercession – that is, if icons are idols in some sense – then what are we to make of scenes that minimize or obscure the presence of a mediating agent?  A second related question follows: is it possible to offer supplication to figures in action – that is, to distracted subject matter?  If it is not, what then is the function of a narrative icon if again it is not that basic quality attacked in both iconoclastic periods?
All of the above questions presuppose a liturgical and/or devotional function in the use of icons.  Indeed, it is difficult to move beyond these concerns in thinking about narrative icons as each is fundamental to our understanding of these images.  At the same time, narrative icons represent such a rich visual tradition in their own right that even the most essential ontological interrogations risk us failing to properly appreciate these panels as works of art, so long as we focus on their functions at the expense of their forms.  It is this latter task of formal analysis that I propose to undertake in the forthcoming pages, though it will not exclude more general considerations of their nature and role in .  Then again, these broader examinations will serve first to illuminate the icons studied, and as such will receive as much attention as their facility in this respect merits.
Regarding the subject of the paper, my primary concern will be a single icon in the Monastery of Saint Catherine on the Sinai Peninsula: an 11th century Scenes of the Nativity that features a number of related narrative strands represented on a single 36cm tall panel (fig. 1).  As such it will be important to view the inquiries preceding my formal analysis as foundational for an understanding of this specific panel.  My impression of the work, to be sure, is that it is exceptional rather than normative, in terms both of its narrative scope and also for its success in appropriating conventional iconography toward a new purpose – namely, for its expression of multiple spatiotemporal units within a single space.  To interject, nativity scenes, by their nature as a hybrid series of disparate events, accordingly posed a difficulty or at least represented an anomaly to Byzantine icon painters, who characteristically depicted individual scenes or single portraits.  As such, it will be necessary at the outset to sketch the basic codes of narrative expression in icons – and their relationship to iconic portraiture – before examining the manner in which the unnamed artist of this great panel has remade the rules of iconic narrative.
Once both of these tasks are complete, I will conclude with another well-known nativity, Giotto’s 14th century fresco in the Arena Chapel, .  My examination of this last work will ask whether Giotto’s narrative formulation solves one of the key problems extant in all of the nativities.  (The primary focus of the paper offers a different, though perhaps less emulative solution to the same difficulty that Giotto engages.)  In other words, to use George Kubler’s terminology, does Giotto’s work conclude a “form-class”?[i]  However, before this moment in the afterlife of Byzantine nativities can be parsed, a history of the forms and iconography of nativity panels is necessary first.
The “Scene” Paradigm
The idea of the religious icon is predicated on narrative.  Each is a depiction of a historical figure or set of figures, whose visual inscription depends upon the details and circumstances of their lives.  To merit representation, the subject of the icon must prove sufficiently germane to the spiritual program of : that is, by providing as a model for the Christian life or in clarifying the vagaries of Orthodox theology.  In this way, the icon’s fundamental purpose becomes didactic, as it mediates the faith for the beholder through figurative representation.  Consequently, the move from portraiture to narrative representation in Byzantine art emerges as a logical direction for this imagery, to the extent that the story providing the genesis for the work is always implicit in the icon’s content.  In other words, narrative icons make visible what was already there.
To illustrate this last point, it is necessary only to look at any number of Byzantine works that augment the portrait of a saint with scenes from their life, such as the early thirteenth century Saint Catherine with Scenes from Her Life (fig. 2) housed at the Sinai monastery that bares her name.[ii]  Here, a full-length portrait of the subject is surrounded by scenes that elucidate “the varied tortures she underwent and her final death by sword.”[iii]  As such, the implicit content of the center portrait is rendered explicitly through the scenes that flank it.  Collectively, they tell the beholder why Catherine is worthy of veneration in iconic form.  While certainly one could imagine a knowledgeable spectator having the same reaction to another portrait of St. Catherine less the narrative imagery, there is, in the narrative form of Saint Catherine with Scenes from Her Life, a lack of ambiguity that derives from this transcription of significant events.  It both adds propositional content to the imagery – that is, St. Catherine, who experienced such-and-such forms of torture, etc. – and to the degree that it makes explicit this content, supplants the oral history that surrounds all iconic subject matter. 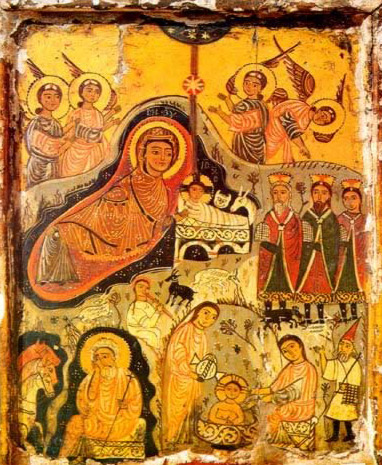 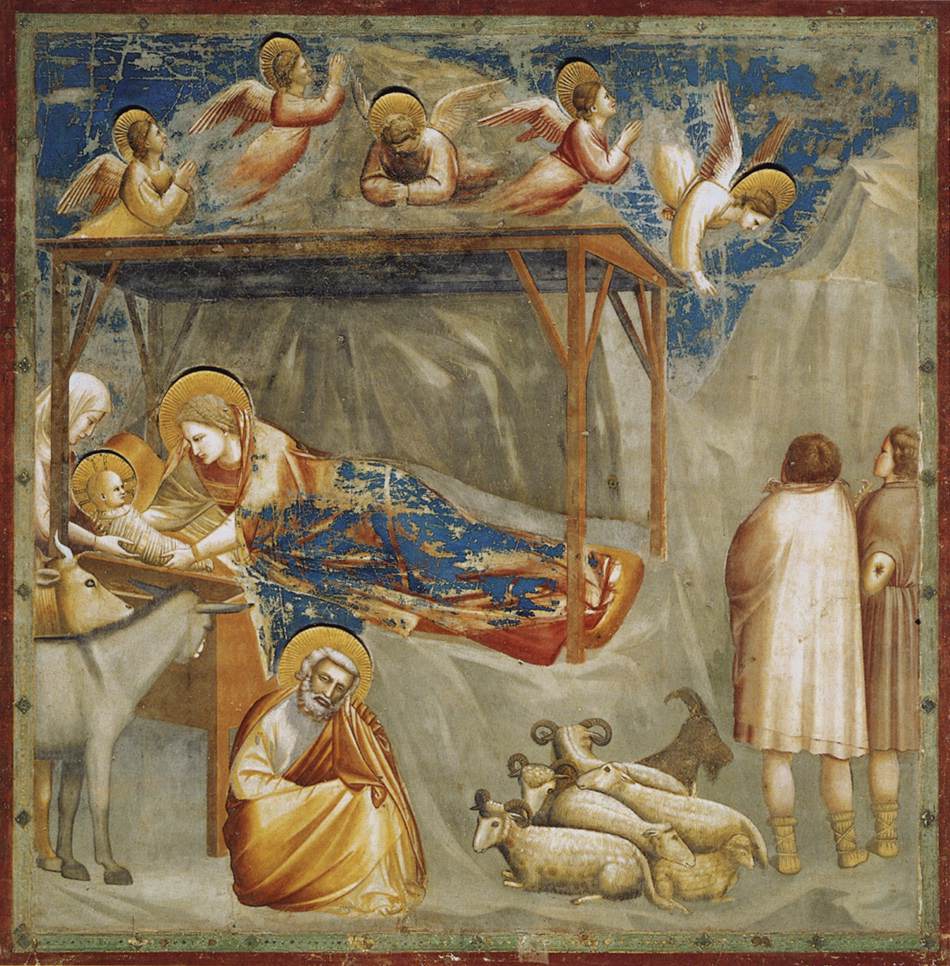 Figure 5.  Giotto.  Nativity.  c. 1304-6.
Postscript – Giotto’s Arena Chapel Nativity
If Scenes of the Nativity’s solution to the problematic nature of nativity feast scenes was to universalize the anomalous, and thereby to make it the code itself, Giotto’s answer can be seen as the opposite course: to bring everything into the unity of a single figure in space.  However, what makes Giotto’s particular solution more instructive than other similar post-Byzantine works is his retention of the breadth of nativity iconography.  In his fresco at the Arena Chapel in (fig. 5), Giotto keeps Mary and the infant, the ox manger, the ox and ass, the presence of the midwife, sheep, a shepherd and the heavenly hosts above – that is all the irreducible elements of the iconography – while creating a new dynamic unifying the figural grouping.  In the case of this work, Giotto has depicted Mary handing Christ to the Midwife over the manger, thereby uniting these two traditionally discrete scenes.  To put it another way, Giotto has submitted each of his figures to a single moment in time.  Indeed, the Arena chapel painting still showcases events with different temporal geneses: namely, Joseph in sleep, the angels announcing Christ’s birth to the shepherds, etc., but with the corrective that the scene could be instantly understood as a coherent space in time.  As with Scenes of the Nativity, there is no exception in Giotto’s cycle, though again, Giotto accomplishes this by bringing the nativity iconography into correspondence with the other feast scene’s reliance upon spatiotemporal unity, whereas the earlier panel uses the “exception” to produce a new logic.
[i] George Kubler defines the “form-class” in the following terms: “The entity composed by the problem and its solutions constitutes a form-class.”  Kubler, The Shape of Time: Remarks on the History of Things (New Haven: Yale University Press, 1962): 33.
[ii] Robert S. Nelson and Kristen M. Collins, eds., Holy Image, Hallowed Ground: Icons from Sinai (: The J. Paul Getty Museum, 2006): 264-5, fig. 55.
[iii] Ibid., 265.
[iv] Ibid., 170-3, fig. 20.
[v] Konstantinos A. Manafis, ed., Sinai: Treasures from the Monastery of Saint Catherine (Athens: Ekdotike Athenon, 1990): 147, fig. 16.
[vi] Iconography of Joseph
[vii] Nelson and Collins, 162-3, fig. 18.
[viii] Manafis, 156-7, fig. 25.
[ix] Ibid., 194, fig. 68.
[x] Helen C. Evans and William D. Wixom, eds., The Glory of : Art and Culture of the Middle Byzantine Era, A.D. 843-1261 (New York: Metropolitan Museum of Art, 1997): fig. 91.
[xi] Gospel of Matthew 1:18-2:18 and Gospel of Luke 2:1-24.
[xii] The Gospel of Pseudo-Matthew (http://www.gnosis.org/library/psudomat.htm): Chapter 13.
[xiii] Ibid.
[xiv] Ibid.
[xv] The Protevangelion of James (http://ministries.tliquest.net/theology/apocryphas/nt/protevan.htm): 14:1-10.
[xvi] In this passage, the author states: “But her hand was withered and she groaned bitterly.  Ibid., 14:20.
[xvii] Pseudo-Matthew, chapter. 14.
[xviii] Protevangelion, 12:13.
[xix] Ibid., 13:8.
[xx] Pseudo-Matthew, chapter. 16.
[xxi] Robert Deshman, “Servants of the Mother of God in Byzantine and Medieval Art,” in Word & Image 5 (1989): 33.
[xxii] Ibid., 33-4, fig. 1.
[xxiii] Manafis, 140, fig. 6.
[xxiv] Deshman, 33, 36; fig. 3.
[xxv] Ibid., 36.
[xxvi] Ibid., 33.
[xxvii] “The Nativity with various associated scenes. This is a portable encaustic icon of religious folk art dating to the 7th century.”  (http://touregypt.net/featurestories/catherines2-7.htm)
[xxviii] Protevangelion.
[xxix] Manafis, 317.
[xxx] Nelson and Collins, 154-5.
[xxxi] Protevangelion 16:6.
[xxxii] Matthew 2:18.  This depiction, it is worth noting, visualizes allegory.
[xxxiii] Examples of increased perspectival depth – depicting the space in planes stretching from the bottom foreground to the top background – become common from the 14th century onward.  Kurt Weitzmann discusses the ascendancy of such a style in The Icon (p. 170-3).  Among other pieces, he mentions a Nativity of the Christ, detailed on page 172.  Additional instances beyond his immediate purview include a Sinai Hexaptych with the Dodekaorton (14th c.; Manafis, p. 198-9, fig. 72); The Nativity (Constantinople artist, 15th c.; in Anastasia Drandaki, Greek Icons: 14th-18th century, the Rena Andreadis Collection, p. 24, fig. 4); and Icon with the Mother of God of Vladimir (in Sinai Byzantium Russia: Orthodox Art from the Sixth to the Twentieth Century, fig. R63).
[xxxiv] Alois Riegl, The Group Portraiture of (Los Angeles: The Getty Research Institute for the History of Art and the Humanities, 1999): 220-1.
Posted by Michael J. Anderson at 3:40 PM