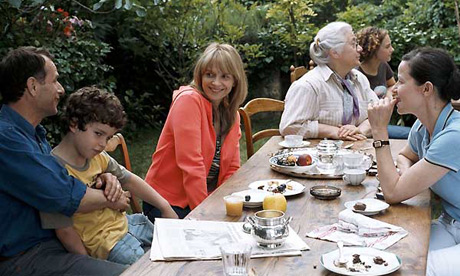 Writer-director Olivier Assayas's Summer Hours (L'Heure d'été, 2008), the second in a series of films commissioned by the Musee d'Orsay, opens on a group of children as they scurry through an emerald country estate. The eponymous season is rendered with exacting precision. Assayas and cinematographer Eric Gautier's exceedingly mobile camera pans between multiple figures as it searches for a narrative subject. On the macro level, the film's principle theme becomes immediately clear: the life of the three generations that have congregated to celebrate matriarch Hélène's (Edith Scob) birthday. Among these are her two sons, Frédéric (Charles Berling) and Jérémie (Jérémie Renier), and daughter Adrienne (Juliette Binoche). The latter two no longer live in France, with Jérémie in China and Adrienne in New York. Thus, when the question of the estate's sale comes up subsequently, the younger two siblings side with selling (as the family home no longer possesses a utility).

But back to the film's opening. Here, Assayas presents the first of three passages centering on the country home. Each of these focuses on one of the family's three generations, with Hélène the first emphasis and her grandchildren the last. After opening gifts from her children, she consults with Frédéric on how she wishes he will manage her estate after she passes. Much of the still striking seventy-five year-old's wealth derives from the art collected by her long-deceased artist uncle Paul Berthier, which includes a pair of Corot's that grace one of the residence's hallways. That Hélène shows a greater attachment to his art is not only a matter of her closer familial relation; as we learn subsequently, she was his last great love.

Yet, this skeleton is not entirely consequential to Summer Hours. Rather, Assayas's film is at its core a work of familial disintegration precipitated by Hélène's death. (Summer Hours resonates directly with the director's fine 1998 Late August, Early September, in both its emphasis on death and its seasonal precision.) With Hélène's passing, once again, Jérémie and Adrienne each opt for their financial gain, as reasonable as it is in their circumstances, over preserving the estate as a family retreat. In this way, Assayas traces the transition from a communal (family-centered) mode existence shared by Hélène's contemporaries to the more individualistic drive maintained by her children, whose lives are otherwise absent, contained in the film's many ellipses. The second generation's country home set-piece, following a heated discussion with the family's tax attorney in which Assayas's mise-en-scène divides into a confrontational shot/reverse-shot chain, and a subsequent brotherly reconciliation in which we discover details of their late father's life, depicts their preparation of the estate for sale. Assayas and Gautier maintain the low-key, interior lighting of the opening passage in this instance, though it is now the detritus of the homestead rather than Hélène's embodied presence, bathed in a deep cyan, and her implied recollections - in addition to a remarked upon Taiwanese flavor, Assayas's film showcases the influence of Andrei Tarkovsky and particularly The Mirror (1975) - that has become the camera's content.

The film's final generation moves into view with the revelation that Frédéric's eldest daughter has been arrested for shoplifting (in addition to her possession of a small quantity of pot). Again this dramatic peak comes to very little in the narrative, though it does serve to shift the film's focus. Shortly thereafter, Frédéric's two children hold a party in their soon-to-be-vacated family estate. With Summer Hours's camera once again mobilized and frequently shifting its human subjects, Assayas not only procures another communal life but concisely references his own masterful Cold Water (1994) - which here is updated in Summer Hour's shift into the present, with the incumbent new musical styles to match. Yet, Assayas also recognizes that there is sadness, at least for Frédéric's daughter, underwriting the conviviality. In an intimate conversation with her boyfriend, she notes teary-eyed that her grandmother once remarked that she would bring her children to this place. The liquidation of her family's heritage will indeed have consequences.

These consequences also include Frédéric and his wife's uncanny experience of their family art in the Musee d'Orsay. Though as his wife notes there are positive social values that derive from their bequeathing the art, its experience loses the personal dimension that it held in the family home. (In part, this passage seems to fulfill the film's commission, along with the behind-the-scenes documentation in which we see a miraculous restoration of a shattered Degas.) Much to Assayas's credit, we feel this loss as the pair look on at an art nouveau desk. In the end, Summer Hour's strength is precisely his articulation of such feelings, and of the details of a family life that extend well beyond the limits of the frame, beneath the film's surface representations and well into Hélène's past. Like A Christmas Tale (Arnaud Desplechin, 2008), with which Summer Hours forms a diptych of sorts (as each centers on the return of family members to their parental home) Summer Hours brings a family into vivid existence.

Of course, Summer Hours's differences with A Christmas Tale are far more instructive than its similarities: Assayas's film is all subtlety, refinement, economy and silence; it refuses temporal disjunction and stylistic disunity. To contrast, A Christmas Tale possesses the impulse to tell everything; the narrative is constantly moving beyond itself in its many acts of digression. Yet in both cases, this is contemporary French cinema at its very best. One film recommends itself above the other primarily on the basis of one's aesthetic inclinations, on their feelings toward stylistic unity/disunity, freedom/control, and so on. Consequently, this piece's two writers split on their preferences with Anderson inclining slightly toward the Assayas and Broad in favor of the Desplechin. Yet we agree wholeheartedly that Summer Hours is Assayas at his absolute peak.

IFC Films will distribute Summer Hours theatrically in 2009. In the meantime, the film is available on an Artificial Eye, region 2 [UK] DVD.
Posted by Michael J. Anderson at 7:15 PM