Aleksandr Sokurov's The Sun (Solntse, 2005) is the third chapter in a tetralogy, for which Moloch (1999) and Taurus (2001) were the first two parts. Like these, The Sun treats the subject of a 20th century dictator -- or "hero" -- who "suffers a personal tragedy" (Islands of Sokurov). In the case of The Sun, Sokurov depicts Emperor Hirohito in the final days of the War, while he is awaiting the fate to be handed down to him by the "occupying forces." Sokurov's episodic narrative includes a conference of the Emperor's cabinet, Hirohito's study of marine biology, two of his meetings with General MacArthur, a photo-op with the Allied forces, a sit-down with a biologist and a reunion with his family. While their temporal relationship to one another is imprecise (and unimportant) the basic arc of the narrative suggests one day with the dimly-lit, misty morning giving way to a sunny afternoon and then to the pale light of evening: these transmogrifications portend the drift from the nebulous opening moments with the Deity cocooned in his palace to the sun-diffused, white light and candle-lit distinction of his meetings with MacArthur where he agrees to renounce his divinity.

Yet, to even make this claim for The Sun is to participate in the sort of analysis that a work as impressionistic as Sokurov's would (almost) seem to resist. Almost, as Sokurov's hieratic shot-reverse structure -- frequent transgressions of the 180 degree rule -- discloses his interest in preserving the spatial disorientation that his eschewal of establishing shots effects. The idea is that we never really know the spaces of the Imperial Palace, as if the narrative were remembered, dictated from a point in the future; at the same time, The Sun offers an imprint of that evanescent moment existing immediately prior to Hirohito's end -- immediately before and after the dictator renounced his divinity (and suggestively, before his final fate). It is a refashioning of Mother and Son's subject, as it is of Russian Ark's interest in preserving a disappearing culture (and even of Dolce's articulation of Eastern visual aesthetics). 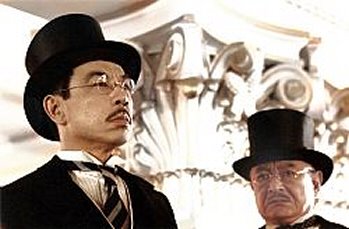 All of this is to say that The Sun coalesces a number of Sokurov's preoccupations -- it could even be described as a signature. Then again, the seriousness of much of Sokurov's work is absent in The Sun, in spite of its ostensible subject: there is the old servant who lusts after the Hershey bar, to say nothing of the dictator's peculiar gestures. Indeed, it is in these actions, strange and banal alike, that Sokurov conveys the humanity of his subject (much like as he does with Hitler in Moloch). Ultimately, this can be said to be the director's purpose, namely to tactilely lend presence (and humanity ) to the person of Hirohito, as when we see the Emperor sliding on his slippers, smelling his breath in his hands -- there exists an effervescent quality to this gesture which could be said to summarize his entire aesthetic: as with Whispering Pages he reproduces the impression of a place and time that is as fleeting as the enveloping mists that descend upon the island nation -- or when we see his mouth forming words which never pass through his lips.

This brings us to another key feature of Sokurov's inimitable style: namely, the sometime absence of naturalistic synchronicity between sound and image. But even more, it is the soundtrack's discordance, such as the scrambled radio transmissions or even the crickets' chirping, that offer an often menacing oral counterpoint to the narrative's quotidian incidents. In the end, of course, this is a film about a man meeting his fate, though it almost goes without saying that something of this dramatic register will not appear on screen.

Qualitatively, it could (and should) be argued that Sokurov is working on an entirely different plane than virtually anyone else in cinema today, and that The Sun rates as one of his most accomplished idiosyncrasies. It is the ultimate Sokurov film, far more so than his international art house breakthrough, Russian Ark, both for its instantiation of such a large number of his key themes and also for its attempted recreation of the profoundly transitory -- the life of a God in a disappearing world. In closing, I would also wish to praise Issei Ogata's brilliant recreation of this living deity, which no less than animates Sokurov's glorious work of art.
Posted by Michael J. Anderson at 8:54 PM

To take this analysis further, especially vis-a-vis the issues of tactility and physicality you hand mentioned (the hand, the breath etc.) it might be useful to look at some work on phenomenology (particularly Annette's article on 2001, since it picks up the science fiction elements that tend to permeate The Sun's focus on the aquatic). This I think is also very important: specifically, marine biology, the dream of the underwater apocalypse; more generally, the feeling of lightness (even weightlessness) the bobbing camera that would suggest the laboratory to be a submarine. The water symbolism seems to have something to do with elemental apocalyptic symbolism on the one hand (destruction by fire and water) and the oppositions of science and religion on the other (in the course of his scientific study he remarks on the heavenly beauty of the crab's shell). There is something to this, although it is difficult for me to say what, which might perhaps have something to do with the film's unstable thematic/semantic valences (things that seem to mean one thing but may mean another, things that seem to mean something but do not, things that used to mean something but no longer do.) In any case there is a powerful sense that something of crucial significance (perhaps something sacred) has been lost or misplaced here, and that only a vague oceanic feeling remains.