"We have every right to dream heroic dreams": Clint Eastwood's Bronco Billy (1980) 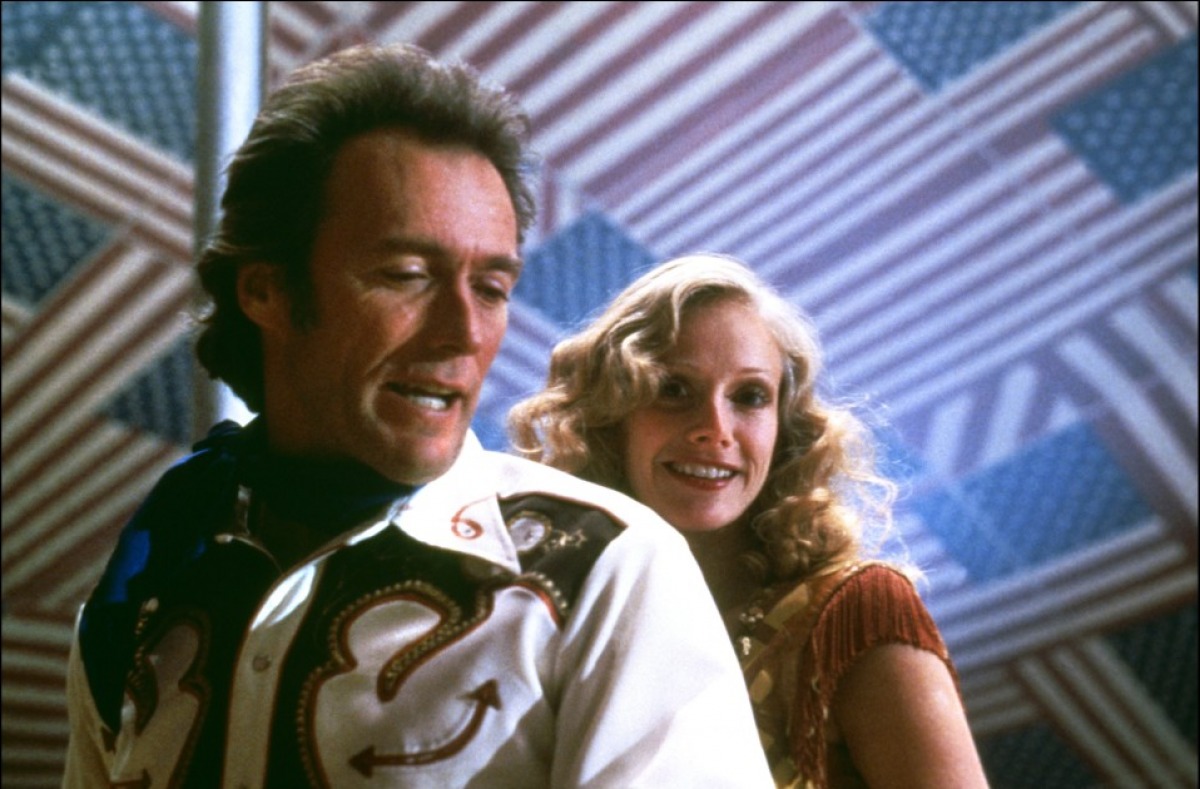 Released in the summer of 1980, one week after the conclusion of that year's Presidential primary season and, coincidentally, the premiere of the similarly Western-themed, John Travolta-vehicle Urban Cowboy (1980, James Bridges),* Clint Eastwood's Bronco Billy (1980) provided a seismic portrait of America at its time of release, worn down by a loss of confidence following its defeat in Vietnam, a loss of trust following the revelations of criminal conduct in the White House with Watergate and a loss of material wealth after four years of "Carternomics," but resilient, nonetheless, and optimistic that a better future awaited the country. Indeed, the America presented in Bronco Billy is a nation at its latter-day nadir, with its symbols stripped of their power and popularity, and its institutions drained of their contemporary relevance, though an America nevertheless where forgotten men and women keep the faith as they cling to the archetypes of a greater past with a view to remaking the future in the same image. Eastwood's film accordingly would prove the ultimate expression of its year, mirroring the optimism (in the face of years of decline) of the GOP's landslide victor Ronald Reagan, while putting forth another story of underdog success following the previous winter's "miracle on ice."

At the same time, Bronco Billy looks backward to another moment of patriotic renewal amid widespread dissatisfaction with the nation's current course: namely to the first years of Franklin Delano Roosevelt's tenure, deep within the doldrums of the Great Depression. Citing, according to film scholar Lisa K. Broad, the flag-waving denouement of Warners' Footlight Parade (1933, Lloyd Bacon) and the socio-economically mismatched pairing at the center of Frank Capra's screwball classic It Happened One Night (1934), Eastwood renews the latter genre within the context of a traveling Wild West roadshow that pays nostalgic homage to a disappearing 'Cowboys and Indians' folk history. Eastwood's Billy, a former shoe salesman from New Jersey, is himself the last of the cowboys, or more precisely, its closest contemporary equivalent, plying his horsemanship and serious firearm acumen under an initially desolate big-top. He plays as a cowboy, in other words, as Eastwood would frequently from his work with Sergio Leone on - and he does so under the tent in a self-consciously poor performance style, an ingratiating feature that would carry over into the subject matter of the director's subsequent, high-Cold War Firefox (1982). Ultimately, the initially inglorious fate of the Bronco Billy Wild West show matches that of the Western genre, and indeed the trajectory of the nation itself, inasmuch as it shares the positions of each well beyond their respective heydays. America's great mythic form, and in a sense the very idea of America, seems to have lost its power as Bronco Billy commences.

So too has its principle institution: marriage. In the same small Idaho town in which Billy and company arrive on their perpetual tour of flyover country, Sondra Locke's Antoinette Lilly (an heiress in keeping with its It Happened One Night source) and fiance John Arlington (Geoffrey Lewis) appear in order to secure a quickie marriage to insure Lilly's inheritance of millions: the virginal, frigid, WASP-ish Antoinette must marry by age thirty to prevent her disinheritance. Of course that she remains unmarried at this age was by no means outside period norms, even if her absent sexuality was; nevertheless, marriage has become purely contractual in Bronco Billy, less a socially beneficial institution than a legal obligation entered into in this case solely for financial reasons. Hence, when on their wedding night Arlington seeks his wife's company, she refuses coldly and flatly, thereby calling to mind both the patrician intoning of Katharine Hepburn and also Jean Arthur's cold-cream confrontation of Joel McCrea in The More the Merrier (1943, George Stevens). Locke is the latest in this icy tradition, with her stiff performance style either satisfying, particularly in contrast to Eastwood's smooth showman (as it is for this writer, certainly) or not.

In the end, Antoinette will be sexually awakened by Billy, in this regard reversing the genders of Eastwood's earlier, more extensive sexual revolution-era foray into the subject - his under-appreciated, largely atypical Breezy (1973), which itself followed on the hot-house adolescence of Don Siegel's The Beguiled (1971) - though only at her pace, and only after Eastwood saves her from would-be sexual predators. (In this latter respect, Bronco Billy joins with any number of Eastwood's works from The Outlaw Josey Wales [1976] onward, where a woman is saved from or the victim of sexual assault.) However, until this coupling occurs, which finally doubles the renaissance of the Wild West show itself - America's institutions are thusly reborn - Eastwood's narrative remains a battle-of-the-sexes, in much the same manner as his previous actioner The Gauntlet (1977), which similarly co-starred Locke, albeit as a prostitute/state's witness rather than as a sexless New York socialite.

The Gauntlet indeed provides an instructive point of comparison for the more optimistic Bronco Billy: while both films underline a loss of institutional confidence - in The Gauntlet, agents of the federal government open fire on Eastwood's officer and Locke's witness, thus accented the state's corrupt-ability (by those forces that would seek the latter's death) in the aftermath of Watergate, along with the state's lack of concern for its own citizen's lives (on the heels of the Vietnam War) - the 1980 picture, made again at a very different cultural moment, offers the possibility of their redemption.

In Bronco Billy, the seeds of restoration are first sown in the director's Howard Hawks and specifically Rio Bravo (1959)-inspired collective of societal cast-offs, genuinely forgotten men and women - an ex-con African American, Native American (and his "Squaw"), a Vietnam deserter, a middle-aged man with a hook and the tenement-born Billy himself - who travel the West playing not only to small and only sporadically adoring public's, but also free of charge, and annually, to an orphanage and an insane asylum. Theirs is a community-centered, Middle American model that compares decisively with the East Coast elite background from which Antoinette comes - and to which Eastwood returns in a set of cross-cut passages, one of the director's favorite, and most frequently recurring narrative strategies.

The group home ultimately comes to Billy and company's aid, sewing a replacement tent constructed entirely of American flags, after a fire destroys Billy's big-top. In the concluding passage to follow, with Locke rejoining the group at the last minute after a brief departure precipitated by the revelation of her identity at the asylum (she had been assumed not only dead but murdered by Arlington, who confessed to the crime in an attempted money-grab), the film's opening set-piece is inverted, with the former's diminutive crowd now a full and enthusiastic house, and its set of miscues, another metonymy of America's recent deficits, replaced by perfect execution.

With their show coming to an end, Billy, flanked by his compatriots, looks directly into the camera, where he pleads with all the "little partners out there" to eat their oatmeal every morning, listen to their parents because they know best, and to say their prayers every night. With this he adds an "adios amigos," at which point he leans into Locke for a kiss. In this regard, Bronco Billy closes with affirmations of those areas of American life that had experienced significant stress in the decade-plus that preceded 1980 - the family, faith and presumably even marriage - and he does so through the mode of direct address, a fitting technique for the film's campaign year. America's institutions, Bronco Billy clearly suggests, might again be renewed.

Eastwood then cuts to an exterior of the flag-constructed interior with John Phillip Sousa's "Stars and Stripes Forever" playing as the camera continues to pull backward. Accordingly, Eastwood makes clear that his subject throughout Bronco Billy has been America itself, much as it is in so many of his works, though never quite this explicitly, with the nation's fate tied to the restoration of the aforesaid institutions, and with a faith in America, patriotism in other words, once again possible. Importantly, Eastwood would reuse the Sousa piece in his consequent Heartbreak Ridge (1986), another key artistic threshold in the nation's progress out of its post-Vietnam malaise. In the latter work, powered by a charismatic lead turn by the director (much like Bronco Billy, where it remains to be said that Eastwood does really fine work in front of the camera), the warm reception of the military following a Grenada-like overseas engagement restores the last of America's most assaulted institutions. Heartbreak Ridge, much like Bronco Billy, proves highly articulate of America's sense of self in the Regan-dominated 1980s.

No less importantly, Bronco Billy also emerges nearer to the center of Eastwood's work than it may at first appear. Bronco Billy offers another self-reflexive treatment of the Western genre that Eastwood, as much as any figure, has dominated in its later stages, while presenting an early archetype of the artist-centered work, see also Honkytonk Man (1982), Bird (1988) and White Hunter, Black Heart (1990), which would provide the core of Eastwood's directorial work in the decade to come. Indeed, with America's symbols restored to more culturally secure positions in the dozen years to follow, Eastwood would significantly depart from representing the nation in times of crisis, moving instead toward a group of films that concerned his vocation as an artist, and at times his failures as a father. His return to America's present, post-Heartbreak Ridge, ultimately would have to wait for his Dan Quayle/"Murphy Brown"-era masterpiece A Perfect World (1993).

Note[*]: Coincidentally, as it features an excellent Merle Haggard cameo and country-style music co-written by Eastwood.