The 48th New York Film Festival: Uncle Boonmee Who Can Recall His Past Lives 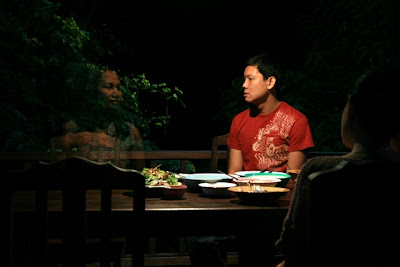 Warning: the following post contains spoilers.  Also, a very special thanks to film scholar Lisa K. Broad for her substantial contributions to the writing of this piece.

Thai auteur Apichatpong Weerasethakul's Uncle Boonmee Who Can Recall His Past Lives opens in a silvery day-for-night, framing a long-horned steer as it crosses through the verdant edge of a forested landscape.  A second set-up offers a set of picnickers, briefly presaging one of the film's subsequent cardinal set-pieces, before the film moves into the enveloping jungle with a loin-clothed hunter addressing the animal of the open.  Apichatpong follows these with a piercing red-eyed creature stalking the same nocturnal landscape. Thereafter, the narrative shifts into an automobile, with the film's consequent principles sharing the interior as the vehicle crosses the Northeastern Thai countryside.  As the filmmaker alternates between close-ups of the passengers and static long framings through the car's front windshield, Apichatpong calls to mind his 2002 breakthrough Blissfully Yours in what accordingly proves one of a series of references that will construct the following passages.  In this way, the director immediately offers a counter-interpretation to the film's title: the past lives on display are not only those of Boonmee - the opening sequence presumably offers an example with Boonmee either the reincarnation of the steer or of the hunter - but of Apichatpong himself, with fragments of the auteur's corpus repeatedly returning throughout the film's 113-minute run-time.

A second example of Apichatpong's cinematic reincarnation occurs in the next scene, wherein the director reuses not only the rural landscape of his 2004 Tropical Malady, replete with its covered outdoor space, but also that film's first-half lead, Tong, who as in the earlier film is once again embodied by Sakda Kaewbuadee.  Syndromes and a Century's (2006) Jenjira Pongpas likewise makes a re-appearance, though in her case under the name (Auntie) Jen, rather than as the earlier work's Pa-Jane.  Indeed, it is more in Apichaptong-newcomer Uncle Boonmee's (Thanapat Saisaymar) kidney treatment, a detail gleaned from the life of the director's of physician father, that Syndromes reasserts its place among Uncle Boonmee's cinematic past-life sources, as well as in the antiseptic hotel room (befitting the 2006 work's urban second part) that closes the director's latest.  Here, the viewer sees Tong and Jen suddenly doubled in super-imposition, leaving to eat dinner at a garishly designed, over-loud restaurant - as their second selves remain glued to their television screen.  In this respect, Apichatpong re-introduces the forking-path, doubled narrative structure that emerges strongest in Tropical Malady and Syndromes and a Century (in addition to its slightly less conspicuous instantiation in Blissfully Yours), albeit only at his latest's close.  Hence, Uncle Boonmee Who Can Recall His Past Lives does not adhere exactly to the two-part, bifurcated constructions that distinguished his trio of 2000s masterpieces, and defined in some sense, along with the work of Hong Sang-soo in Korea, the art cinema for the decade as a whole.

Instead, Uncle Boonmee Who Can Recall His Past Lives's fluid fabulist registration suggests an exceedingly appropriate return to the director's "exquisite corpse" first feature, Mysterious Object at Noon (2000) - 'appropriate' given the more recent film's governing interest in origins, be it those of the forms and places of the eponymous uncle's past lives, the director's prior cinematic efforts and influences (including those of the Thai soap opera) and even of the cinema itself.   In one of the latest film's most staggering set-pieces, preceded immediately by an uncharacteristic hand-held follow through the jungle, the trio of leads enter an explicitly originary, primordial cave, with primitive paintings decorating the rock walls and gemstones magically glittering overhead.  Through this space, an automatic metaphor likewise for the cinematic art in its evocation of Platonic shadow play, Apichatpong suggests the origins of his and all (cinematic) art; the spectator sees as the director's figures, filmed from above as they lie against a bright limestone backdrop, suddenly break from the slumber, in essence animating the cave paintings spotted only moments earlier.    This indeed follows on Uncle Boonmee's avowed Chris Marker moment - which is to say its clearest acknowledgment of film's still photographic origins - with a series of stills, taken from the filmmaker's "Primitive" instillation (of which Uncle Boonmee is the culmination), providing the visual counterpoint to the titular figure's voiced-off dream.

A second self-contained dream-encoded passage occurs with the on-screen, cinematically self-reflexive fable of the princess, subsequently pleasured by a catfish, at the water's edge.  Here, Apichatpong transitions to the sequence's day for night, marking one of the film's six disparate stylistic regimes (each culled from a separate real), immediately upon showcasing Tong lying in a hammock.  The viewer is invited in this instance to read the scene as a dream, with Tong's status as Apichatpong's closest narrative surrogate implying that the set-piece is a product of the director's fiction, even as he or she also assumes that the un-spooled is another of Boonmee's past lives.  As such, Uncle Boonmee Who Can Recall Past Lives presents multiple, porous and concurrent ontological registers, befitting the film's intrinsic Surrealism (considering again its solicitation of Mysterious Object at Noon's narrative organization).

Then again, it is less the film's depiction of surreality in the traditional meaning of the dream than it is its configuration of local animist myth and superstition - as for example when both Boonmee's dead wife and his transmogrified (Monkey Ghost) son appear at their ultimately comic al fresco dinner - that insures the work's true singularity.  Apichatpong reinvents not only his narrative structure to process Boonmee's Buddhist procession of past lives, along with the director's (cinematic) own, but also the film's relationship to the material world, validating the presence of apparitions and their communion with the living through their co-equal presentation.  Uncle Boonmee Who Can Recall His Past Lives, in other words, thoroughly reinvents film language, what it allows as possible and how it depicts this possibility - Uncle Boonmee does not simply replicate Tropical Malady's doubled form with one-part accordingly claiming a metaphoric valence; rather, the director's latest offers the folkloric to fully permeate the presumed real - in order to facilitate its parallel presentations of reincarnation, the spirit world, human subjectivity and even the director's auto-biography and artistic history.  For the writer of this piece, Uncle Boonmee appears at first glance to be Apichatpong's career best, and quite conceivably the strongest new work of cinematic art in some years.
Posted by Michael J. Anderson at 11:43 AM

Nice Shairing Thank You Keep It Up