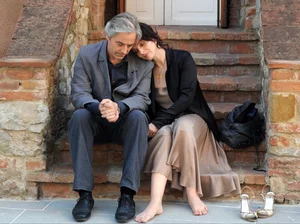 Hi Michael,
Thanks for your coverage of New York Film Festival.

I'm referring to your review on UNCLE BOONMEE. I expected UNCLE BOONMEE to be the fabulous film (The best of Mr. Joe) – I really like SYNDROMES AND A CENTURY and went to watch UNCLE BOONMEE with highest expectation. I liked it but I need to see it again. After first glace I couldn’t follow film in its final ten minutes, set in an urban hospital (after Boonmee’s death) . It seems to me a kind of unexpected conclusion (anti-conclusion?!). What is your idea about this final 10 minutes? Nevertheless, I hope to re-watch it soon.

My take on the film's final passage is that apropos of the work's strategic return to the director's previous work, the end offers a reproduction of SYNDROMES AND A CENTURY'S urban segment, with the actors reprising their roles from that film (rather than, as in the case of the male lead, his role from TROPICAL MALADY, which he occupies for the rest of the film). The finale likewise offers a paralleled reality that again befits the director's strategies from BLISSFULLY YOURS through SYNDROMES. I suppose one could say that the final section is the most concentrated piece of self-reference in a deeply self-referential film.