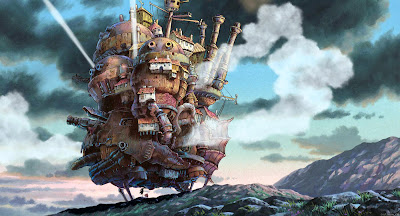 Commencing yesterday and running through the 30th of this month, New York's Museum of Modern Art presents Hayao Miyazaki and Isao Takahata: Masters of Animation. The retrospective's centerpiece will be the North American premiere of Howl's Moving Castle (2004), Miyazaki's latest, which will subsequently receive a limited national release starting June 10th. (For Minneapolis readers, the film will open on that date at the Uptown Theatre.)

As no great fan of animation, let alone animae, I will admit that I think of Miyazaki as something of an exception. His best films manifest many of the same qualities as the very best of the classical Hollywood system: that is, they succeed in addressing multiple audiences at once, both as organic works of art and as entertainments in their own right. Spirited Away (2001), for instance, is targeted at ten year-old girls, seeking to remedy their principle anxieties, while operating as a parable for the economic crisis for older viewers. Then again, those not within the former demographic are likewise given a glimpse into the young female's psychoses. It is in other words an art that operates on numerous levels, separately addressing different viewers.

Another instance of dual and even multiple address in Miyazaki's work is in its salience for culturally Japanese and non-Japanese audiences. In any context, Spirited Away is a fantasy. However, for the Japanese viewers, it is a fantasy mitigated by Shinto metaphysics. Spirits are everywhere in the work, as kami are everywhere in nature. When a creature enters the spa with a horrendous odor, it is the product of a spirit. Chihiro, the ten year-old protagonist, judiciously cleans the monster, ridding the spa of this terrible spirit. In this way, not only does Spirited Away manifest a Shinto causality, but further upholds one of the religion's four affirmations: the importance of physical cleanliness. To bath in Shinto is to participate in an important purifying ritual.

Another of these affirmations is the sacredness of nature, which is a concern that the filmmaker often returns to throughout his corpus. In films like Nausicaa of the Valley of the Wind (1984) and Princess Mononoke (1997), this Shinto belief is fused with an ecological allegory that condemns reckless industrial civilization, and particularly its employment of nuclear weaponry. That Shinto has so easily coopted environmentalism surely accounts for the latter's prevalence in recent Japanese cinema -- beyond Miyazaki, major works include the Shinto-titled Himatsuri (Mitsuo Yanagimachi, 1985), Rhapsody in August (Akira Kurosawa, 1990), and Charisma (Kiyoshi Kurosawa, 1999), among others.

Beyond Japanese cinema, where ecological concerns flow from Shintoist thought, environmentalism has become, arguably, the chief religious art of the modern world. The cathedrals of the medieval world have been since replaced by public spaces that call attention to a transgressive industrial past. Another recent MoMA exhibit perfectly articulated the religious intimations of environmentalist art. Groundswell: Constructing the Contemporary Landscape offers a view of contemporary urban landscapes reappropriated after their industrial dereliction. As the program notes, "nearly every significant landscape designed in recent years occupies a site that has been reinvented and reclaimed from obsolescence or degradation as cities in the postindustrial remake their outdoor spaces." In other words, these new designs represent a sort of contrition toward a misused Mother Earth, often maintaining the scars of their industrial abuse as if a continual reminder for generations ahead of the industrial era's grave sins.

But more on that later: in a film review of mine to be published next month, I further articulate the reasons for evaluating environmentalism as a religion. If you are unable to wait that long, I would recommend Michael Crichton's speech to the Commonweath Club.

As for the current film program at the MoMA, or for Miyazaki's art more generally, it almost goes without saying that it is essential, whether or not its respective religious intimations are of any interest to you. I mention these only out of what is otherwise critical slight: to understand Miyazaki's work in particular, I would argue, it is necessary to understand it within its Shintoist rubric.
Posted by Michael J. Anderson at 4:01 PM