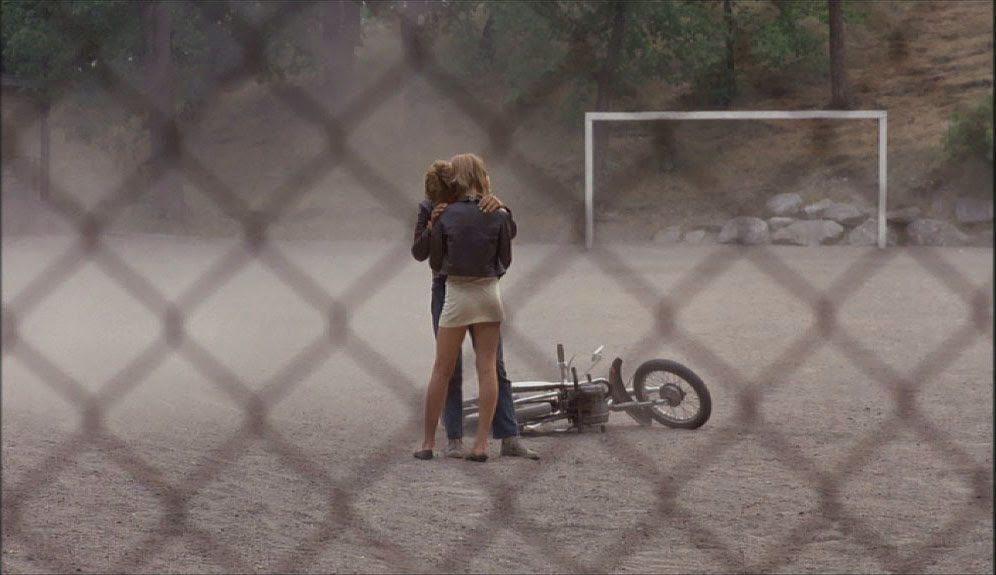 Roy Andersson's A Swedish Love Story (En kärlekshistoria, 1970), the first of the intermittently active writer-director's four features, conspicuously advances a very different aesthetic from the filmmaker's two more recent sequence-shot dominated, episodic comedies, the highly estimable Songs from the Second Floor (2000) and You, the Living (2007). In this, the director's very impressive diploma film, a shot/counter-shot editing strategy and telephoto lensing often predominates, whereas Andersson tends to reserve action in his later work for frequently-static, deep space compositions. However, it is less these formal differences that prove immediately noteworthy than the earlier film's arresting teenage romanticism, figured within the still shocking - at least to these US-based writers - sexual morays of the Swedish social democracy.

A Swedish Love Story treats the tender, burgeoning love affair of fifteen year-old Pär (Rolf Sohlman) and sub-fourteen Annika (Ann Sofie-Kylin, who is quite strong, and memorably alluring, in her role) as they move from endless clandestine glances, captured in an equally unending series of match cuts, and messages sent via intermediaries - the stuff of preteen romances everywhere - to their first night of carnal love. This encounter is comically interrupted the next morning with Annika's aunt Eva's (Anita Lindblom) arrival, leading a shirtless Pär to dash for the nearest closet. Annika assures Pär that everything's copacetic, given that it's just her aunt; yet, Eva, who throughout the film laments her own loneliness, subtly shows her concern - and perhaps the film's own disproving - when she asks her niece her age, which we then learn is "almost fourteen."

Andersson's critical perspective becomes even sharper, especially in contrast to the earlier romantic passages, during the subsequent crayfish feed at Pär's parents' summer home, replete with light physical violence and a very pushy salesman. In this extended, concluding scene, with the adults and children alike wearing shellfish-sporting bibs and tiny hats, Andersson's dark comic sense comes into the fore, as will his absurdist-cum-surrealist touch subsequently, with the inebriated party-goers combing a misty lake side for Annika's missing, disgruntled refrigerator salesman father (Bertil Norström). With their search concluded, the partiers return to the family cabin in the early dawn light, prefiguring mentor Luis Buñuel's The Discreet Charm of the Bourgeoisie's (1972) roadside close.

Before Andersson shifts to this more familiar register, however, A Swedish Love Story operates closer to the musical tone poetry of Jacques Rozier's Adieu Philippine (1962), and to the palpable naturalism of primary Rozier inspiration, Jean Renoir. Like both French directors, Andersson fills his first feature with saturated, indelible exterior visuals, whether it is the pastoral space of their first outdoor encounter; the film's memorable dusk motorcycle ride, which the Swede typically cuts with highly evocative, youthful pop scoring; or the warm golden lanterns that illuminate the final section.

Or there is a pair of parking lot-set encounters that nicely underline the film's genuine romantic content: Pär first rides into the midst of the leather-clad, chain-smoking young teenagers, for which he receives a beating. This leads to a second confrontation in which the emotionally hurt Pär snubs Annika, speeding away on his moped. As disappears from the space, Annika breaks down in tears, emphasizing the real affection that augments their shared passion; this is a love story. Yet, Pär does return, providing the sort of visual punctuation in long take that has become the director's signature. Though it is fundamentally a work of naturalistically-infused lyricism, A Swedish Love Story nonetheless contains a germ of the director's more mature, though not necessarily superior, later work.
Posted by Michael J. Anderson at 9:16 PM

I'm sorry I missed this, football takes precedence of course, but I'll soon find a way.

I did manage to see his follow up to Love Story, Giliap (as well as the delightful shorts program), which is a fascinating transitional film containing the seeds of his future style. It's the film that banished him from the film business for 25 years, and it's not hard to see why. He's already begun using long takes, although the camera is more mobile and there are still a few traditional shot-counter shot setups. However, the movement is generally limited to delicate push-ins, and his darkly absurdist humor is present in abundance. The opening shot finds a drunkard fruitlessly trying to catch up with his hat as it blows up the street.

It's definitely a minor work, but it nicely uses a dilapidated hotel to stand-in for the death of European civilization (or something like that). The allegory loses its zest as the film drags on, but it's definitely worth a look.

Thanks for the Giliap update Rob. The Vikings were not on here in CT - nor were the Bills, for that matter! - so it made the decision a lot easier for me. That and the need to buy NYFF tickets.

Lisa actually saw the film Thursday, when Andersson introduced it, and she said that he seems to have some affection for Giliap, while generally dismissing A Swedish Love Story, which given its noticeable differences in its concerns and style (from the later works) makes such a position understandable. I will reiterate, however, that it is a very fine film all the same, regardless of whether one knows who Andersson is or not. Really, this is a case where auteurist considerations add only a small amount of interest.