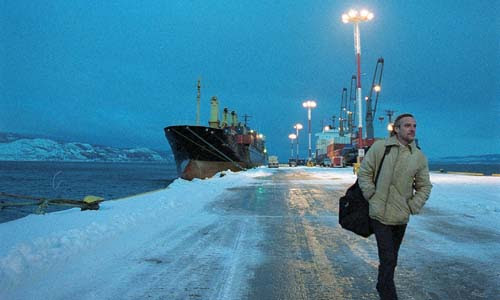 Warning: the following post contains spoilers.
Lisandro Alonso's Liverpool (2008), which concludes its one week run at New York's Anthology Film Archives this evening, proves to be the third superior work of the "New Argentine Cinema" to have premiered in Manhattan during the past twelve months (following Lucrecia Martel's The Headless Woman and Celina Murga's A Week Alone, both 2008). Whereas Alonso's countrywomen emphasize social contexts in their latest, be it in Martel's compositions that push the picture's under-class members into an out-of-focus periphery or in Murga's allegory-imbued gated community, Alonso's subject is an expressly de-contextualized male protagonist, Farrel (Juan Fernández), in his return journey to the rural home of his estranged, aged mother.

Liverpool opens inside a cargo freighter as it approaches a remote Patagonian port. Amid the vessel's enveloping din, Alonso highlights the everyday interactions and tasks of the all-male crew, whether it is the shared play of a largely off-camera video game - depicted within a typically very low-key lit interior - or an extended take of a crewman steering the ship. Indeed, it is the latter figure, later identified as Farrel, who henceforth will become the narrative's principle focus, following his entreaty to see his mother in the next port. Consequently, after an extended, excessive passage of Farrel at the wheel succeeding his aforementioned request, Alonso follows the lead into his tight cabin where the middle-aged sailor prepares for his shore leave; here, the director magnifies the quotidian through his systematic use of long takes, with details like a sticking desk door, a momentarily caught zipper and the screech of an object pulled across laminate, brought into focus.

On shore, Farrel steps through the wet, coastal snow, which Alonso likewise captures falling in front of nearby floodlights. After stashing a bag and taking a swig of an ever-present vodka bottle, Farrel dines in front of a large photographic mural of an autumnal lake, alone in the frame. With the sound of off-camera diners juxtaposed with the solitary Farrel, the protagonist's lonely existence becomes palpable, and highly empathetic, as it does likewise in his short shared occupation of a frame with a pair of card-players and a woman viewing a telenovela at a truck stop, as well as in a second solo dining passage in a logging camp. From the truck stop, Farrel rides on the back of a logging truck, atop a cold, snow-dusted log as the vehicle passes though the icy fog of this Southern locale. Once at his destination, Farrel trudges through the thick Patagonian snow before stopping beside a rusty tank resting on top of a wooden platform (where he takes another drink), that is itself covered in pyramids of untouched snow.

Throughout Farrel's journey, then, Alonso emphasizes these tactile experiences, and more broadly the viewer's sensorial memory, triggered again by a scraping sound or the feel of snow-covered bark. (Having been born and raised in a largely wooded and rural northern environment, this writer can attest to the indelible singularity of the latter sensate experience, namely sitting on a cold, snow-brushed log, which is as much haptic as olfactory.) Alonso's cinema, grounded in a modernist, long-take aesthetic, seeks to communicate first on the level of the senses, making the director's spectators aware of the natural and man-made environments that the medium is uniquely skilled in bringing to robust life. Liverpool both pulls its remote world into existence and re-introduces its spectators to the natural world.

Once at the logging camp, Farrel does see his mother, if only for a very brief time (over which his mother never seems to realize fully who her visitor is). Sitting beside the bed-ridden elderly matriarch, he says very little, typical of Liverpool more generally, anxiously pulling up her comforter. Having arrived only a few minutes before, Farrel departs, giving money to the seemingly handicapped Analía (Giselle Irrazabal), as well as the eponymous key chain. The latter object, examined in the film's final shot, is clearly, according to film scholar Lisa K. Broad, an empty signifier for this young woman of indistinct age, cut off from the rest of the world in this remote camp.

However, this final shot does not immediately occur upon the gift's bestowal, but rather awaits an interval of quotidian activity that succeeds Farrel's departure. Analogous to Alonso's tendency to hold his shots even after the primary activity concludes and/or figures have left the frame - defining examples include Farrel steering the ship after making his request, the card-game continuing after the young television-watching woman and Farrel leave the room, and Farrel's final disappearance at the tree-line, deep into the distance of a long landscape shot - Alonso continues his narrative for a short duration even after his protagonist has made his final appearance. Here, as in his shots, life likewise goes on, as it will even after the narrative, when we fear Farrel's mother will pass on, or, more tragically given the former's advanced age and medical condition, Analía could be taken advantage of by the young man who shows her some attention in the camp.

In this way, Alonso breaks from a direct identification with his protagonist, both in individual shots and in the wider narrative, giving us instead a more full depiction of the reality that this would limit. Then again, the director's modernist restrictions do very much restrict the narrative details we are presented, providing us instead a sensorial experience of Farrel's journey, and plenty of space for narrative speculation that the film's post-Farrel passage analogizes.

Having opened wide in 1,600 theaters this past weekend, which though boundlessly more than Liverpool certainly is far from an overwhelming number, Mike Judge's Extract (2009) represents the opposite side of the artistic spectrum from Alonso's long-take modernism and narrative revisionism: Judge instead employs a television-friendly, classical Hollywood decoupage editing style and traditional three-act story structure that looks old-fashioned even next to today's film comedy standards (where, as in the collaborations of Adam McKay and Will Ferrell, essentially any deleted scene might replace any included narrative set-piece with little discernible impact). Yet, in spite of its exceeding conventionality, Extract, and Mike Judge's televisual corpus more broadly, does share Liverpool's emphasis on the banal, and its facilitation of a recognizable reality. Indeed, it is precisely these qualities that has made Judge's and Greg Daniels's King of the Hill among the most vital and profoundly American visual culture texts of the past decade (easily besting its long-since irrelevant, elite popular culture-pandering network cousin The Simpsons for most of its run), showcasing as it does a Middle American, working/lower middle class reality that otherwise has been so rare on the small screen. Every bit as much as Alonso's sensory experiences, Judge's America proves authentic.

Extract returns to the work place world of the director's cult 1999 Office Space, with the latter's cog in a corporate environment protagonist replaced by the former's small business-owning, entrepreneurial hero Joel, here played the perennially under-appreciated Jason Bateman (Arrested Development, another of the past decade's absolute TV highlights). Joel's biggest problems at the narrative's open are David Koechner's always irritatingly present neighbor, who charges Joel's BMW as soon as he pulls into his gated community driveway, and his less-than-amorous wife Suzie (Kristen Wiig) who goes into romantic lock down each night at 8pm when she changes into her sweat pants - and a corresponding insulation problem that he confesses to the appropriately off-casted Ben Affleck (who plays Joel's drug-pushing and man-pimping bartender confidant Dean). At work, Joel's hard-won success is about to pay off with a potential sale to General Mills looming. This, of course, is imperiled with a lost testicle, the arrival of Mila Kunis's "criminal drifter" seductress and Gene Simmons as an ambulance chaser who will stop at nothing, including bankrupting the company, to insure that his newly half-male client gets payed well beyond what we are assured will be a very large settlement regardless.

In all of the above, Judge presents Joel as the victim; however, in his private life, Joel proves quite self-destructive. After taking one of Dean's unmarked pills, Joel agrees to tempt his wife - in hopes of feeling guiltless in his pursuit of Kunis's nubile Cindy - with extraordinarily dim-witted man-whore Brad (Dustin Milligan). Suzie succumbs to Brad's masculine wiles, which Judge presents in a highly comic soft-focus insert narrated by the aforesaid gigolo. Indeed, for this writer at least, Judge's latest is perhaps, joke-for-joke, the funniest of the writer-director's film comedies.

Extract is also among his most current light satirizations. Opening concurrently with Michael Moore's Capitalism: A Love Story's (2009) Venice premiere, Judge's work provides a preemptive counterpoint to Moore's anticipated class warfare, eschewing a Manichean good/labor-bad/capital, employer split, with a more subtle, good, but flawed boss who ultimately chooses to make a financial sacrifice of his own for the good of his workers - and admittedly, for the preservation of his small business. That his flavor-extract company, like King of the Hill's Strickland Propane, is ultimately presented favorably, unlike Office Space's more corporate Initech or Chotchkie's, indicates the nuance in Judge's own pro-Capitalist inclinations: his sympathies reside with the small businesses rather than with the kitschy chains or the anonymous corporations. Still, the very act of standing up for business at all, amid all of the criticisms of the aforesaid economic system, whether judicious or not, assures Extract's cultural importance and place - as always for Judge, standing with the non-elite Americans whom he only gently scrutinizes, whether the assistant manager of Strickland Propane, a relatively affluent small business owner in the heartland or his newly single-testicled floor manager.
Posted by Michael J. Anderson at 10:45 AM