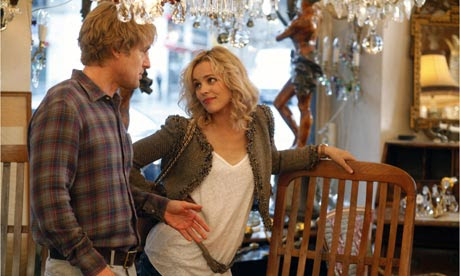 Woody Allen's Midnight in Paris, the writer-director's era-bending perambulation through an unceasingly picturesque City of Lights - Darius Khondji (Se7en, 1995) and Johanne Debas deserve immediate citation for their deeply alluring lensing of the shifting French capital - manages to speak unerringly on the level of and to its assumed audience member (urban, liberal, upper-middle class and late middle-aged), without ever threatening even a hint of discomfort for the same bourgeois viewer. In a profound sense, Midnight in Paris is a work by and for America's complacent elite upper classes, for those who would deign to wonder aloud 'why anyone would live anywhere else when they could live in Paris,' or who still imagine that the nation's power-brokers consist predominately of French-hating, aesthetically insensate Republican W.A.S.P.'s, who (against all odds) still live in California. In this latter sense, the 'Marie Antoinette' Allen's cultural-cum-demographic politics belong squarely to the director's formative 1960s and 1970s, with just a dash of a more contemporary, Bush and Tea Party-hating variant of the director's signature 'bigotry for the Left.' Though the spectator is reassured that Allen's Owen Wilson surrogate is the one who always stands up for the help - of course does, don't all our betters? - Midnight in Paris has a serious class-problem, which ultimately manifests itself in Allen's extraordinarily anesthetized tourist's portrait of the French capital. Where Whit Stillman's similarly luminous, romantic and exceedingly verbal Metropolitan (1990) did manage a lower middle-class outside, Midnight in Paris remains squarely within the latter-day equivalent of the haute-bourgeoisie that Luis Buñuel skewered in the same Exterminating Angel (1962) to which Wilson's writer lead Gil refers in a fantastic encounter with the Spanish-born director. Of course, Allen, forever in his echo chamber, misses the irony that it is exactly his social class that Buñuel would ravage at present.

Never mind, Allen wants you to know that he knows that Buñuel was a Surrealist. And that Ernest Hemingway wrote brusquely about the war and traveled to Mount Kilimanjaro, that F. Scott Fitzgerald married a ball-of-fire named Zelda, and that Auguste Rodin sculpted. Of course, Allen is no less inclined to ridicule Sorbonne-lecturer Michael Sheen's pontifications on any and every work of art that the Americans encounter, with Gil finally silencing the aforesaid with a bluff about Rodin, taken from an invented two-volume biography. Sheen's blowhard Paul, no less apt to resort to fiction presumably, responds to the writer's incantatory citation of authority, which Allen seems to suggest is all that matters to those egg-head academics. Allen's artist Gil, on the other hand, really cares about the art; he's the one who dreams about the past, and who is enraptured by meeting the Hemingway's and the Fitzgerald's and the Gertrude Stein's (which presents an undeniable, if shallow parallel pleasure for Midnight in Paris's acculturated viewers). The bourgeois Allen's surrogate truly treasures his Cliff Notes experience of "Lost Generation"-era Paris.

Fortuitously, Stein, Hemingway et al. appreciate Gil's literary gift, just as we are asked to imagine the early champion of Henri Matisse and the author of The Sun Also Rises (1926) would value the work of our own age's evidently no-less gifted auteur. However, Allen's own writing in Midnight in Paris happens to interfere with this assumption, given how screamingly bad 'everything anyone ever says' actually is in the director's latest - a mouthful to be sure, but then again I would never assume that André Bazin or Manny Farber would be impressed by my prose. A self-deprecating Albert Brooks Allen most assuredly is not. Nor again he is a Stillman whose Jane Austen fascination has been digested in a manner that contrasts sharply with the writer-director's much too on-point, surface-level treatment of his own professed heroes. Nor is he a Buñuel or even more appropriately given his squarely middle-brow ethos, a Mike Leigh, whose strong sense of class indeed extends beyond his own current well-healed place. The latter director's exceptional 1976 tele-film, Nuts in May, in fact does impressive, if virtual work in sending up the American bourgeoisie of the early 2010s. Allen, on the other hand, seems to have no insight into his own moment, and no awareness of his socio-economic place, even if his film abounds with unintended sociological insights. When finally he does choose the Parisian present, it is for the continued existence of the boundlessly nostalgic boulevard café and, commensurate with another of the director's personal and artistic signatures, for the pretty (and notably) young-thing who shows an interest in the Allen surrogate.
Posted by Michael J. Anderson at 1:31 PM

All the people I know who love the film are poor with middle class parents. If it was only made for the upper class, it was made poorly. I don't think that's the case. I also don't think this is the best use of your great talents, if only because I've seen a better takedown by a far less talented individual (and found neither worthwhile). But mostly because nobody wins.

The Gertrude Stein remark got me curious about your literaly tastes (indeed, I've been curious since the Eric Rohmer article). Would you be kind enough to share with us what are your favorite books and authors, Mike?

Agree with JeanRZEJ. How much cinema, after all, is really made for the "elite upper classes?" If any, surely it would be precisely the "experimental" or "avant-garde" cinema most guarded against the pitfalls of Allen's naïveté. Allen's treatment of the wealthy elite here was far more convincing to me, though superficial, than his tortured posturing in Match Point. And I wonder also how his portrait of Paris is really that much more "anesthetized" and touristic than, say, Linklater's portrait of Vienna in Before Sunrise, a film I know you admire; nor am I confident, frankly, that I prefer Linklater's dialogue. Granted, Allen's characters are stereotyped, but that doesn't necessarily make them unbelievable, just as Allen's unrelenting predilection for younger women doesn't necessarily make him a bad filmmaker, even if it does, possibly, make him a bad person. None of this invalidates your criticisms of what remains a flawed film - with about the (anti-escapist) escapist appeal and sophistication level of a francophile Wizard of Oz - but I do think you're a little harsh on Woody, here and elsewhere, and not always for most convincing of your sometimes very cogent argumentation. Oh, and this is nothing, but the phrase is well-heeled.

Guto, perhaps some of the problem here lies in the fact that my literary tastes correspond a great deal with the film (and period) in question: Hemingway, Fitzgerald, Proust, Lewis's MAIN STREET. I also admire the Russians a great deal, especially Dostoevsky (and the greatest of all novels, THE BROTHERS KARAMAZOV). I haven't read enough Balzac or Tolstoy, but I like what I have read. Many, many others of course, from the Greeks to Job, St. John and Romans to Shakespeare to CANDIDE to Sartre and Camus and Vonnegut. All over the place I know; mostly older befitting my Great Books undergrad education.

Jean and Letters, sorry to have offended, but M. Allen really rubbed me the wrong way here - and I was a paying customer, while this blog's for free. I had a bone to pick and I did that. I agree that this isn't the best use of my *talents,* such as they are, but sometimes one just needs to vent, and I did that. Don't worry, I probably won't be going anywhere near another one of his films anytime soon and have no plan to write about him again in future. The internet is safe from my opinion.

Michael, I'm sorry to bug you further on this, but I'd be curious to hear what you have to say about Mr. Allen's earlier works from, say, Annie Hall to Crimes and Misdemeanors (which I can at least say I preferred personally to the thematically similar Match Point), that is, whether you actively dislike them or simply feel that, they being both overly familiar and "squarely middle-brow" (your phrase, but an apt one), other films are more deserving of attention. Not unrelatedly, I'm even more curious about your thoughts on his acknowledged idols, Bergman and Fellini, who, along with Allen and A. Kurosawa, are almost conspicuous by their absence from your otherwise impressively encyclopedic writings - not that I'd wish seriously to challenge this (with the notable exception of Otto e mezzo which, say what they will, I'll always love to death), especially considering the ample attention you give to Rossellini, Antonioni, Dreyer, Ozu, and Mizoguchi (all, granted, probable superiors to the F/B/K trio - Mr. Allen, I think we can agree, not quite on the same level).

I think your phrase "more deserving of attention" is key. With respect to the earlier Allen, I have seen a number that I have liked well enough over the years (Annie Hall, Broadway Danny Rose, The Purple Rose of Cairo and Hannah and Her Sisters, to name a few). It's a good enough body of work to merit interest, no question; it's just not a group I am particularly passionate about. And since you referenced the lists, with only ten films per year, they naturally are not meant to be comprehensive. They serve foremost to confirm my personal taste, and to provide a set of recommendations according to my own sense of judgment. A sense of cinema, to borrow a phrase.

So, you are right to point out that Bergman, Fellini and Kurosawa all rate less highly for me than they do for some. I really don't wish to get into it too much at this point, but suffice to say there are aspects of each that don't particularly appeal to me, though they are by any accounting major filmmakers all - and all have in my estimation made full masterpieces, which you will be able to intuit from their position on my lists.

I guess all of this is to say that I am not so disposed to Woody Allen.