Over the Edge: Tsui Hark's The Blade (by, Lisa K. Broad) 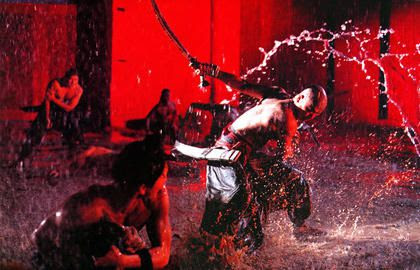 Tsui Hark’s The Blade (1995), which will receive a rare 35mm screening at this year’s New York Asian Film Festival, is a mythical beast of a film. Cheng Cheh’s steel-plated revenge tale The One-Armed Swordsman (1967) provides its underlying narrative skeleton, and the rest is stitched together from marked flesh, mud, blood, smoke, fire, flashing lights, and shifting shadows. Much of the film is told from the point of view of the spoiled and cloistered young daughter of a sword factory owner, who lusts after two of her father’s employees, On and Iron Head. Her hothouse subjectivity lends the early sequences in the factory a vivid, sadomasochistic tactility that persists throughout the entire film. Tsui’s camera draws out the contrasts between the soft, pale hands of a monk and the tanned, scarred bodies of the sword factory workers who cut their muscled biceps in a Buddhist ceremony; it takes in the tattooed visage of Lung, the flying über-assassin who killed On’s father. The Blade also draws a series of parallels between men and animals, equating human flesh with raw meat.

Like Sam Peckinpah, Tsui pursues his genre-revisionist ends by juxtaposing brute physicality with disorienting stylistic abstraction. (An early sequence in which a group of laughing young men lure a dog headfirst into a bear trap recalls Peckhinpah’s The Wild Bunch [1969] while also foreshadowing On’s maiming at the hands of bandits.) Discussions of the film’s visual style often make reference to its use of frenetic cutting during the action sequences, but montage is not the only weapon in Tsui’s cinematic arsenal; every stylistic element is a freely moving part. Tsui consistently juxtaposes spatially and temporally disjunctive editing with teeming multi-planar compositions filled with whirling-dervish swordsmen, complex and frequently erratic camera movement, hallucinogenic primary colored lighting, and a bombastic musical score. The result is a kind of infernal overtonal-montage; a deranged work of film art that can only come to life in the projector. The Blade also makes extensive use of shadows, lens-flares, and reflections that – as a result of the rapid movement both within and between the film frames – often feel as real and solid as the objects photographed. In particular, a vertiginous action sequence set among ruined bamboo shelters creates a graphic lattice-like pattern of light and shadow that is truly avant-garde. After a while, the sensory overload is so extreme that the eye can no longer ‘look into’ the image-space; the illusion of depth is completely destroyed, and the motion-picture is revealed for what it is. A heady mixture of flesh and phantom that far exceeds the sum of its parts, The Blade will break you down.

The Blade will screen at 6:00pm, Saturday July 11 at Lincoln Center's Walter Reade Theater.  Filmmaker Tsui Hark will be in attendance.
Posted by Michael J. Anderson at 9:19 PM

I am very inexperienced when it comes to asian "sword-films" but by accident happened to see this one (the blade) on a film festival and got completely blowned away, the intensity of that film is still in me, even though it was years ago since I saw it. So, my question is, are there other films of this caliber out there, if so, which ones?
Jan