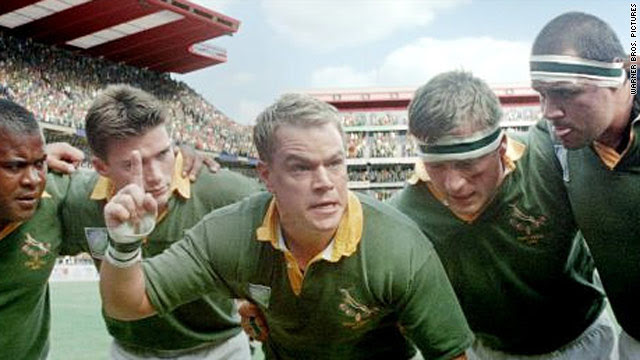 Clint Eastwood's Invictus, from an Anthony Peckham screenplay of John Carlin's Playing the Enemy: Nelson Mandela and the Game That Made a Nation, does what the director's films do as a matter of routine: it reinforces a relatively discrete set of authorial concerns - sufficient in their proximity to the director's biography to earn the contested tag of personal - while uniquely embodying the zeitgeist of its making. Invictus, in this last respect, provides a seismic reading of America in at least its early 2009 production phase, that is of a nation - with a dubious racial past - fresh off its election of its first African-American president. Eastwood's film, however, while conscious of the singularity of this achievement in both nations, does not stop at the meretriciousness of Mandela's election, but rather showcases his wisdom in ruling the entire African nation of 41 million, both black and white alike. The director and screenwriter's Mandela preaches forgiveness and reconciliation, even when most of his own racial and political faction would seem to prefer justice in the form of revenge (always a subject for late Eastwood). Ultimately, the implied connection between Mandela and Barack Obama stops at their election, with the life of the former becoming for the latter proscriptive rather than a descriptive comparison. Invictus is thus, however loosely, the cinematic equivalent of the President's Nobel Prize.

That Eastwood emphasizes Mandela's (played very ably by Morgan Freeman) outreach to the defeated white minority, in his defense and advocacy of the Sprinboks rugby club (captained by Matt Damon's Francois Pienaar), a lingering symbol of apartheid-era South Africa, illustrates the former's extraordinary political aptitude, while underscoring the picture's present-day implications. That is, Invictus projects a hope in unity rather than in racial and especially factional division (which is very much in keeping with the campaign-trail Obama of the film's 2008 pre-production phase). In this way, Invictus conveys the optimism of the defeated, not a surprising tact for the libertarian-leaning former Republican mayor and John McCain supporter, even more than it does the joys of the (formerly oppressed) victors. Eastwood shows this clearly in the sudden excitement of South African sandlot soccer players upon the news of Mandela's release and in the literal periphery of the Pienaar family maid for most of the film; importantly, Eastwood stages the former scene contradistinctively, with camera movements and the director's signature cross-cutting (a strategy that obtains throughout this sports movie) serving to compare the soccer players' celebrations with the rugby teams' ruminations on the "terrorist's" release. Mandela's actions win over both the Sprinboks and their mostly white fan base, lending to the film's generally hagiographic tone.

Nevertheless, Eastwood and Peckham do suggest the leader's troubled personal life, and especially his estrangement from his daughter, which beyond providing some balance to their treatment of the former president, places Invictus within the thematic current of the director's more recent corpus, following on the similarly themed True Crime (1999) and Million Dollar Baby (2004). Likewise, Eastwood's concluding underlining of Mandela's age and declining health rhymes with the director's previous Gran Torino (2008), with which it also shares its racial emphasis. Still, as accomplished as Freeman's performance is in Invictus, Eastwood's latest suffers in comparison to Gran Torino by virtue of Eastwood's scene-chewing absence in front of the camera, which enlivened the 2008 release. Analogies of quality aside, Invictus proves to be the biopic, Eastwood-less Bird (1988) follow-up to Gran Torino's supremely entertaining Heartbreak Ridge (1986).

Invictus likewise shares Gran Torino's overly-exaggerated symbolic and thematic exposition, the 2008 picture's greatest deficiency, which in the former film most egregiously manifests itself in Eastwood's concluding Christ-pose. In Invictus, the picture's use of cloyingly obvious pop songs and an extended, heavily cliched penultimate slow-motion passage (made necessary in part because of his decision to cut between the action on the rugby pitch and the reactions off) rate as unmistakable lows. In other words, Eastwood's conventionality, one of the great late classicist's biggest strengths, becomes a weakness. Nonetheless, the strengths of Invictus certainly outweigh its flaws, from Eastwood's perpetually skilled direction of actors and his classical storytelling (save for the aforementioned, unnecessary accents) to again, its clear expression of 2008-2009 American public thought. (In this latter respect, Invictus succeeds in besting the less historically precise Gran Torino.) With Invictus, Eastwood has made yet another cogent entry into his most American of contemporary canons, in spite of its non-American subject, providing a film that is neither among the best nor the worst of his pictures - not unlike a late, artistically minor if thematically significant John Ford such as The Last Hurrah (1958); Eastwood's official stature makes him the modern day equivalent to the master, as does his robust sense of his country of birth - but one that is nonetheless fully his.
Posted by Michael J. Anderson at 8:19 PM

Using your knowledge about Eastwood's films you were able to appreciate the film on its most interesting grounds; i.e. its connection to the rest of his work. It appears I liked the movie less than you did, although we certainly agree about Eastwood's choice of music, and a big part of my distaste for the film was the extremely poor handling, in my opinion, the rugby sequences.

Though you didn't mention them much in your review, this is clearly a sports movie in the classic, inspirational mold. And despite all the connections to Eastwood's career that you cited, the world of sports movies is something he's never really tackled before (at least to the best of my knowledge). But you're far more the Eastwood expert than I. I'm wondering whether there is some Eastwood sports movie out there I'm forgetting, and whether you can justify those lengthy, incomprehensibly shot (not to mention slooooooow) rugby sequences as speaking to some larger Eastwood idea. I struggled to grasp what he was going for in spending so much time on the rugby while simultaneously refusing to film it in such a manner that would make it clear to an American audience unfamiliar with the game.

I don't understand why he has to make rugby "clear to American audiences." This is a South African story about South African characters - everyone knows the game there. To insert a tutorial would be irrelevant and insulting to the characters.

In any case, I'm unfamiliar with the game and grasped the outlines of how it works through what Eastwood provided (tie-ups, field goals, touchdowns). And as for the "slow" rugby sequences, I thought they were the culmination of his pattern of cross-cutting. During the game, he repeatedly cuts back and forth between micro and macro instances of the divisions instilled by apartheid. There's the security team, his relationship with his daughter (who wants her father to be more vengeful), and the nation's relationship with the rugby team. In the final sequence, he combines all these elements in an extended bit of cross-cutting that acts as the culmination of all of these strands.

While you've both mentioned the film's faults - it's descent into sentimentality, the sickly sweet score - I think it's overarching structure, it's exploitation of sports as politics, and it's handling of the revenge theme make it one of the better American films of the year.

I must agree with Rob that a tutorial on the sport would have been out-of-place in the film - given that rugby could have been anything universally meaningful to white South Africans. Besides I too, rugby novice that I am, could follow the play relatively easily. To get back to Matt's question, this is Eastwood's first forray into sports filmmaking, with the noteable exception of "Million Dollar Baby" (which of course is a genre/sub-genre all its own). I don't think it particularly suits his talents, which I think you were inferring.

As to the "slow" rugby scenes, I really didn't have a problem with these either. My issue was with the slow-motion, which certainly was employed to maintain continuity across the cross-cut passages. The cross-cutting itself is a pivotally important part of both the narrative structure and of Eastwood's directorial style (Eastwood is the closest to Griffith of any contemporary Hollywood director I know). My issue, again, was with the slow-motion employed across these passages, which at once felt gratuitous (in terms of facilitating audience recognition) and more than likely needed to visually clarify the celebration. I would be interested, however, to watch the whole passage without this technique - or some partial employment of the strategy.

This criticism, and the others voiced above aside, I would agree that it rates among the better American films of the year, for its registration of the present in this nation and the development of the violence theme that Rob notes. Even Eastwood with a few hiccups stands shoulders above most in the industry (which as always is the moral of the Cahiers-Sarris brand of auteur criticism that I tend to employ on this site).

Thank you for asking. I will be publishing my list, and those of a couple others, 1/3/10. Concurrently, I will also publish a small poll at TEN BEST FILMS (tenbestfilms.blogspot.com). Please do check back after the first of the year for my choices and the group results. (As a post-related hint, however, INVICTUS did not quite make the cut.)

I can see your point that to explain the rules of rugby would be someone out of place in a South African story about South African people. However, that doesn't stop Eastwood from including the scene where the Springboks, for the purposes of boosting national morale, and interest in the team amongst black South Africans, teach the game to black children. I caught one concrete rule there -- that you can only pass the ball laterally or backwards -- but the rest of that sequence was mostly wordless images from the generic inspirational sports montage school. I don't know why there couldn't have been a few more concrete rules laid out here, organically integrated into a scene of the team teaching people to play rugby. What other narrative purpose does this scene serve other than that?

We've all agreed on many other Eastwood films, but if you both think this truly is one of the better American films of 2009, then we disagree about this one.

Great, thanks so much!