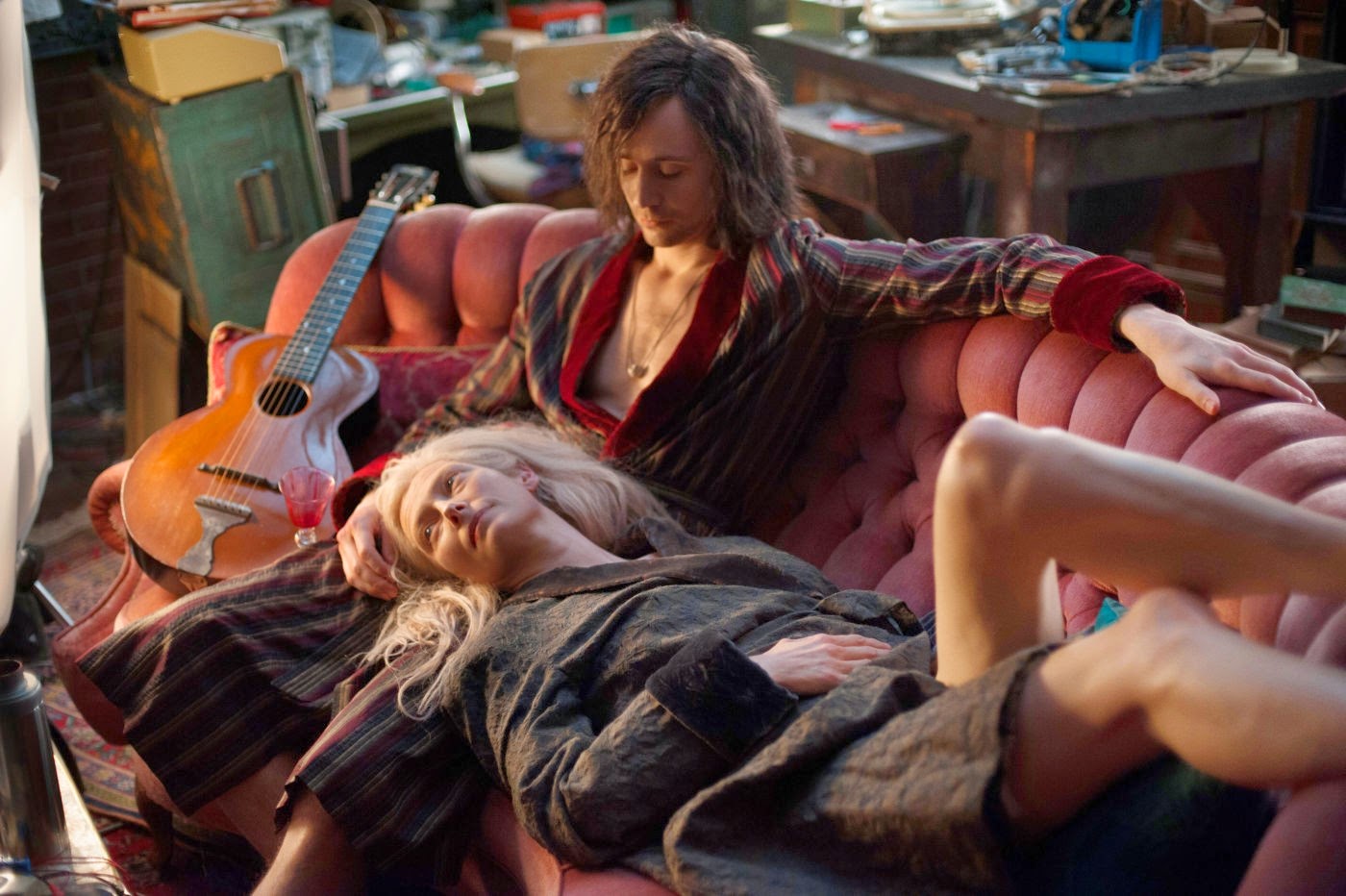 With its opening, starry nocturnal sky bleeding into an overhead set-up of a revolving turntable, Jim Jarmusch's vampiric opus Only Lovers Left Alive (2013) wastes little time in (analogically) tipping the identity of his heroic blood-sucking faction: they are the men of science rejected by generations of ignorant "zombies" and the greats of poetry, literature and most of all music who toil in and out of public view. Jarmusch's male lead Adam (Tom Hiddleston), identified and juxtaposed with his lover Eve (Tilda Swinton) in the alternating, LP-style overheads that succeed the picture's introductory set-piece, proves immediately exemplary, producing great music over a span of centuries that on the one hand would be credited to Schubert and on the other passionately consumed by twenty-first century zombie rock kids - despite Adam's refusal to receive citation for his art. The Romantic myth of the artist is much bigger than Jarmusch's fundamentally nineteenth century hero.

Adam, of course, is also a connoisseur of the first order, with his stunning collection of stringed instruments in particular providing an object for his (and the film's) rapt attention. Jarmusch's own expertise shades more toward the vinyl that dominates Adam's living space - just as perilous stacks of paperbacks populates Eve's - with the film's carefully curated noise, Motown and Middle Eastern-dominated musical cues never less than spot on in their selections. While the same cannot quite be said for the literary one-liners that would not have felt that out of place in the risible Midnight in Paris (2011), these occasional incursions of dilettantism seem only appropriate in the director's latest piece of bohemian identity-building (which builds directly on 2009's similarly concerned and wildly undervalued The Limits of Control) in the face of a hostile, insensate and ecologically irresponsible consumerist present.

Geographically, Jarmusch finds the nineteenth century of his Gothic generic subject, or at least its predilections, in the urban ruins of post-Industrial Capitalist Detroit, and in the perpetual exoticism of Eve and close friend Christopher Marlowe's (John Hurt) old Tangiers. While the latter provides a familiar subject within the contours of the Romantic visual tradition, the film's mobile, midnight registration of latter-day Detroit feels affectingly new and even urgent as an originary act of poetic reclamation. Jarmusch's isn't the first fiction film to capture the experience of despondent present-day Detroit, but it is certainly the most lyrical, and on some level, the most compassionate. Only Lovers Left Alive, even more than the ultra specific 8 Mile (2002) and Clint Eastwood's masterful, if generically 'Rust Belt' Gran Torino (2008), emerges thusly as the twenty-first century Motor City masterwork.

Then there is Only Lovers Left Alive's more immediate identity as a latter-day vampire film, a sub-genre that Jarmusch's film equally dominates, thanks especially to the the filmmaker's creative interpretation and application of the nineteenth-century mythos. Present similarly in details such as its O-negative popsicles, privately commissioned hardwood bullets and complicated, nighttime trans-Atlantic flight itineraries, Only Lovers Left Alive's most memorable and noteworthy refashioning of the vampire narrative ultimately occurs with its instantly compelling and even revelatory characterization of its nocturnal rock musician as vampire. Much to the author's credit, there is a sense in which Jarmusch's narrative choice feels as if it is the most natural within our current cultural context (while of course remaining deeply personal for this cinematic paragon of the early 80s Downtown 'punk' scene). To put it another way, Jarmusch has managed to organically transform the stock vampire narrative into an archetypal example of his own personal mythology.

The filmmaker's postmodern sensibility, by comparison, emerges through the unique temporality of vampiric experience: having lived for centuries and even millennia, Adam and Eve persevere in an almost post-historical condition of multiplicity, as inhabitants not simply of a degraded present but also of countless pasts that live on not just in their remembrances and relationships, but in the anachronistic artifacts that fill the filmmaker's latest (from Adam's century-old dressing gown, stringed objects and late sixties stethoscope to Eve's modern iPhone and the leather gloves worn by both). Time itself emerges as one of Only Lovers Left Alive's primary emphases and points of contemplation, whether it is the elegantly languid form that conveys Jarmusch's deliriously romantic narrative - and expresses the indie master's modernist interest in the experience of duration - or in the lovers' essential immortality, which provides the film with its deeper emotional resonance.
Posted by Michael J. Anderson at 9:22 PM