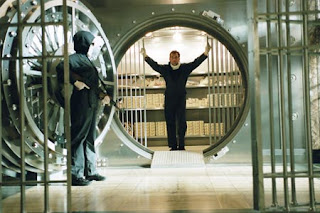 Or, How I Learned to Stop Worrying and Love (no, not love; let's say like or even like a lot, if we must) Spike Lee.

It is interesting that Inside Man represents one of those archetypical instances of a director, seemingly under contract for a fairly straight exercise in genre, which might as well have been crafted for him or her in advance. Then again, it is precisely in these sorts of works that the merits of the auteur theory become clearest: it is, after all, a theory that defines the status of the director as an artist, not simply an advocation of autobiographical filmmaking. And there can be no denying Lee's imprint on Inside Man, in spite of the fact that it may well be one of the director's least personal pictures.

At the level of technique, Lee's stylistic elan is apparent from the opening shot: Clive Owen's bank robber addresses the camera, telling us his name, profession and location (a cell, though significantly, not a prison cell). The director proceeds to adopt Hitchcock's technique -- from Vertigo -- wherein a tracking shot is accompanined by a zoom. The effect (also used spectacularly by Scorsese in Goodfellas' diner scene) brings us closer to the character, even as the space behind the figure is reconstituted. It is, in other words, a signifier of a baroque style, as is for instance Lee's frontal tracking shot, in which Denzel Washington's fluid movement seems to suggest that he is standing on top a scooter or cart of some sort. These moments of excess, within the broader framework of generally terse direction, indicate the same flamboyant stylist who translated the American baroque of Welles and Scorsese to Brooklyn's Bed-Stuy neighborhood in his exceptional Do the Right Thing (1989). 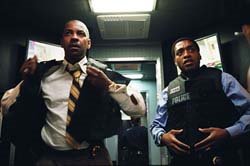 Yet, it is that terseness, the film's economy, which truly recommends Inside Man. Much of this quality can be attributed to Russell Gewirtz's exceptional screenplay, though even in the film's dialogue Lee's voice is unmistakable -- particularly in the race-baiting that has been transformed from politically-militant axiom to politically-correct satire. Indeed, Lee's rhetoric seems to be in the process of softening, especially since his 2002 standout, 25th Hour, which encapsulates America's post-9/11 feeling that "we are all New Yorkers" better than any other film I know. Inside Man shares with that earlier pinnacle an ethnographic description of five boroughs life, as well as its referencing of incarcaration (though it stops short of making fear of anal rape a structuring motif, as is the case with 25th Hour, which itself might just portend the director's willingness to bait groups other than racial or ethnic in their orientation; here, Washington is allowed a single quip).

Returning for the moment to the narrative structure, Lee and Gerwitz encourage us to hope that Owen can get away with his crime -- a large portion of the heist genre's pleasures, after all, pertain to the intelligence and dexterity of the crimes committed; and from the opening monologue, Lee affirms his position within this tradition. It helps that Lee skillfully discloses and conceals many of the details of the caper, creating objects of suspense beyond the simple will they or won't they get away with it axiom. One of the best early examples of this is Lee's refusal to re-enter the space of the bank after being introduced to Washington's negotiator, for an extended duration. While we already know the anti-heroes, we are little more cued into what the protagonist is facing at this moment than he is himself. In this way, Lee shows himself to be a bravura manipulator of narrative information, as he will throughout the remainder of the film. I'm tempted to make a comparison to Bryan Singer's modern classic, The Usual Suspects (1995), though I would do so only with the caveat that Lee's twists don't entirely reach for that same epistemological vertigo.
Posted by Michael J. Anderson at 4:54 PM

One I plan to see again...a rarity.

Inside Man a movie that you don't essential to shoot! Wonderful draw and keeps the audience guessing till the stylish indorse. Denzel Washington is at his best activity the NYPD policeman, his wonderful activity makes this prevarication as believing as it can be. Clive Reformer, what a superb dramatist! He is so bivalve, waxy, and luxury in this pic and he actually makes me theme for the "bad guy" from the commencement deedbox the end.