To the distant observer, the fact that I never once listened to "A Prairie Home Companion" in the nearly quarter century that I lived in the North Star State may come as something of a shock. Then again, I suppose your average Venetian might not be so inclined to tune in to a program populated by crooning gondoliers and waxed mustachioed pizza chefs named Luigi with a penchant for "cheesy" jokes. (I of course would listen to that broadcast religiously, provided that there were the offensive accents to match.) No, I've never possessed even a modicum of curiosity has to what was going on over there at the Fitzgerald Theater in St. Paul, in part because I am more than passingly familiar with concepts such as pot lucks and Lutherans. And to tell you the truth, I've never been a real big fan of either. Besides which, as any true Minnesotan would know, we get our facile populism from WCCO, where at least one has the chance to hear a Twins or Wild game every now and again.

Consequently, the simple fact that there was going to be a Prairie Home Companion movie scripted by Garrison Keillor was nowhere near sufficient inducement to get me to see the film, even if it was to be shot entirely in the Twin Cities -- so was Jingle All the Way, and heaven knows I love me my Christmas. However, the "Directed by Robert Altman" credit, shall we say, changes things. Not that I am that big a fan of Altman myself: at best, I remain on the fence regarding the merits of McCabe & Mrs. Miller (1971) -- I'm not exactly a fan of unrelenting vulgarity and the aesthetics of the zoom lens -- to say nothing of the abject hatred I possess for the borderline pernicious MASH (1970) and the profoundly unlikable Cookie's Fortune (1999). (As Matt Singer astutely summed it up over at Termite Art awhile back, "Has there ever been a great director who has made as many bad movies as Robert Altman?"; let me add that I haven't even seen any of the films Singer disparages, though I should also mention that he regards the first two films that I note quite highly.) Having said that, I would not hesitate to call Robert Altman a major American director, with at least one masterpiece, The Long Goodbye (1974), to his credit, as well as a couple of other works that deserve to be mentioned in that conversation, namely the uber-zeitgeisty Nashville (1975) and the admirably Renoiresque Gosford Park (2001). So while the film's pedigree portended anything but a sure thing in this writer's opinion, even the possibility of major new Altman was enough to get me in the theatre.

And as circumstances would have it, the film's opening coincided with what has become my bi-annual pilgrimage to the land of my father: was this serendipity, to be shared with about fifteen others at a $5.25 Monday matinee in one of the state's reddest corners? Or was I about to see my first Popeye-sized flaming disaster? It almost goes without saying that the truth was to be found somewhere in the middle.

First to those with a similarly prejudiced opinion of Keillor going in, A Prairie Home Companion will do little to endear you to GK (in spite of the Gophers hockey sweatshirt he wears in the film's final scene): he has, after all deigned to memorialize himself; one could even say he has even has eulogized his own death. Unless, I suppose, you possess a heretofore untapped penchant for homespun Upper Midwestern existentialism tempered with more than its fair share of bad jokes and a glibly reductionist view of rural life. Through all this, Keillor plays a Joel Gray-mould master of ceremonies, with a yen for collaborating with each of his schematized performers. Yet, for all the star-power that graces his stage, A Prairie Home Companion remains Keillor's show -- right down to the intimations of an affair that his GK supposedly once had with Maryl Streep's Johnson Sister (with the latter seeming to maintain romantic and bad feelings for Garrison in equal measure). 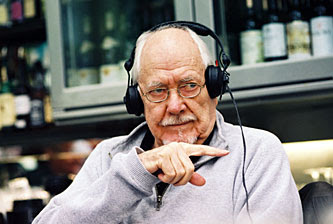 Of course, being an Altman film as well, A Prairie Home Companion is in no short supply of highly memorable, nuanced supporting performances: including Streep, her low-grade Carter imitation sister Lily Tomlin, daughter Lindsay Lohan, singing cowboys Woody Harrelson and John C. Reilly (whose "Bad Jokes" number registers as a best of show), pregnant stage manager Maya Rudolph, Virgina Madsen's metaphysical femme fatale, and especially Kevin Kline as Guy Noir, who gets the pic's best joke, which anyone familiar with the trailer will already know -- that Rudolph, well into her third trimester, should lay off junk food and "sex with men."

Importantly, Kline (the perfunctory narrator), Madsen and Tommy Lee Jones's Texas magnate each operate on a level beyond that of the fictional final performance at the Fitzgerald Theater: they are what might be termed fictional-fictional characters; that is, they seem to function on a meta-narrational level, fulfilling formal concerns while at times bypassing their material existence within the space and time of the story. Moreover, where Kline's character at least is a hold-over from the radio program, he and Madsen, along with the singing cowboys, instantiate types of a now-disappeared filmic past that Altman has remade over the course of five decade career. In his handling of the metaphysical status of Madsen's Veronica Lake-type in particular, there is a narratological freedom to counter-balance the director's tight directorial control.

As to this control, A Prairie Home Companion showcases the continually moving camera of Gosford Park, along with a graceful, if not masterly lighting schema that principally features warm, golden light, which if anything seems to amplify the film's highly elegiac tone (perhaps by virtue of proximity to candle light). In fact, Altman's utilization of these warmer tones, along with the film's funereal implications -- both for the program itself and also for the fates of certain characters -- closely matches the final (and greatest) film of another American director with a similar ethos, John Huston's The Dead (1987). While I would pause before saying that it fulfills a similar purpose to that which The Rules of the Game does for Gosford Park, namely in acting as a prototype for not only the film's narrative, but further for Altman's multi-character structures, there is some in wisdom in viewing Altman as a combination of Renoir's humanism and Huston's high-key pessimism.

Yet, there is nothing so mournful about A Prairie Home Companion, which is ultimately just about the most visually graceful concert film ever made. Simultaneously, Altman's film retains the disaffectedness of the director's youth, even if it is masked by Keillor's Norsk mannerism(s). Jones, who has come to close down the radio show, conveniently is a Texan, and even more importantly, is a man of religious conviction. The world that Altman and Keillor create on-stage and off, though very much suggestive of small town values, is a secularist's world that is perhaps best represented in another characterization: the "Lunch Lady" (Marylouise Burke), who we discover is the long-time lover of performer Chuck Akers (L. Q. Jones). In his translation from radio to screen, Keillor has opted to uncover the vestiges of the sexual revolution beneath the surface of Lake Woebegone. Perhaps it is not simply "A Prairie Home Companion" that Keillor and Altman are eulogizing, but the remaining parcels of blue, middle America that are themselves disappearing, as the Texans move in. Unfortunately for the Jones character, however, and red-staters everywhere, Altman and Keillor still hold the narrative strings. In other words, A Prairie Home Companion is a summation of America's internal power structure, circa 2006. And its’ got some real nice music too.
Posted by Michael J. Anderson at 7:56 PM

Hello again,
I feel the spontaneous need to agree with you wholeheartedly about the overrated and unpleasant faux-satire MASH, which I re-watched the other day (masochism perhaps?). Admittedly, I don’t rate Altman and have consequently seen but a few of his works (I found Nashville to be very fine, Brewster McCloud, The Long Goodbye and Gosford Park quite fun, but The Player, Short Cuts and Pret-a-Porter just dreary). MASH, however, is beyond the fantastic: has ever a feature film by a supposedly serious filmmaker sustained such technical ineptitude and unwarranted self-satisfaction for its full running time?
Anyway, keep up the good work,
L