New Film: The Go Master & Woman on the Beach Tian Zhuangzhuang's The Go Master does little to explain the film's titular game, Go, in spite of its insistence that said game and the obscure religious sect Jiko define the picture's autobiographical subject. Rather, Fifth Generation auteur Tian has opted to limn the tranquility of master Wu's internal life, which the director figures through the picture's static framing, long takes, accompanying deliberate pacing, and the natural settings that inscribe the same interior peace. Indeed, one of the film's lines underscores this conflation of nature and Go as it claims that only a mountain lake claim can rival the peace that the game affords the master. Yet, it is not simply the game but also the aforesaid religious faith that the combine to shape Wu's life, even if the abuse of that faith is cautioned -- the sect leader, who makes a claim for her own deity, is in the words of another character filled with an evil spirit, "the delusion of grandeur" (in this way The Go Master compares in its subject to Horse Thief [1986] and the latter's critique of the Buddhist faith -- and implicitly the Communist regime). Likewise, the film's exquisite, modulated handling of light echoes that of Springtime in a Small Town (2002), which it also copies in its removal from Maoist Chinese history. Yet like with that film, and particularly his fearless The Blue Kite (1993), there seems to be a dissonance between his personal concerns and the politics of the Marxist regime. Consequently, one may be able to read Tian into the film's concluding quote: that his life has been about truth and Go (which in his case one could replace with art). 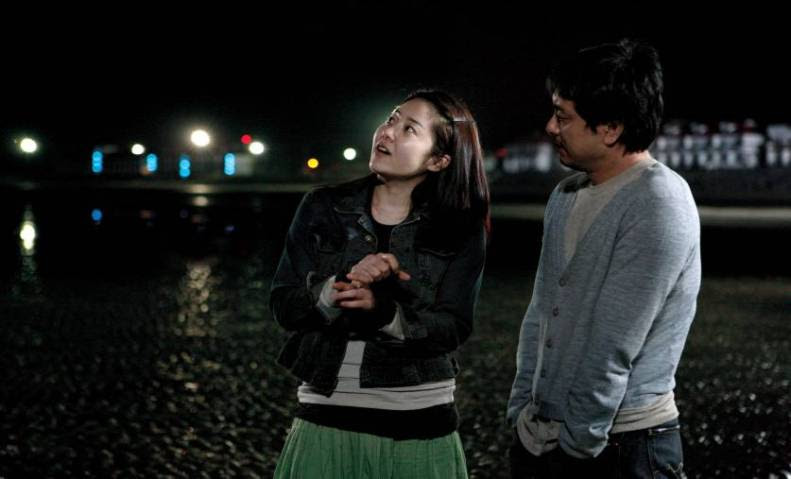 Hong Sang-soo's Woman on the Beach furthers a trend in the Korean auteur's corpus (Virgin Stripped Bare by Bachelors [2000] may be the paradigmatic case) wherein character subjectivity is expressed in the manipulation of a seemingly objective narrative. Here, Hong offers a second reading of the film as the story of the main female lead by concluding Woman on the Beach with a scene that depicts the thirtysomething having her vehicle pushed out of the sand. Up to this concluding turn, Woman on the Beach reads as the story of a director Kim, who clearly instantiates the contemporary Korean male, as he suffers from an irrational jealously directed toward the lady's earlier affairs with Europeans before he sleeps with a woman whom he says looks exactly like her (after the former leaves for Seoul). However, when the first woman returns to the off-season beach resort where both of the affairs had been consummated, Hong's film becomes a variation of Vertigo (1958) were it somehow possible for Madeleine and Judy to coexist and compete for Scottie. (In fact, the picture's extensive utilization of character doubling clearly marks the film as descending from Hitchcock's cinema.) The Scottie of Hong's film, Kim, is to be sure a stand-in for the director himself -- as it is worth stating that the film's self-consciousness is further connoted by the semi-frequent zooms and a framing strategy that calls attention to the artificiality of the frame -- though as the earlier description should suggest, Woman on the Beach is perhaps the least flattering self-portrait this side of the cinema of João César Monteiro (Recollections of the Yellow House, 1989). Of course, this sense of humor extends far beyond the contours of the director character, making Woman on the Beach by a large margin the funniest reflexive Korean art film of the year.
Posted by Michael J. Anderson at 10:48 PM