Correspondences from Sixty-Eight!: The Structure of Crystal + Early Garrel 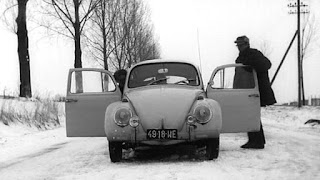 Krzysztof Zanussi's The Structure of Crystal (Struktura krysztalu, 1969) concluded Sixty-Eight!, Yale's 1968 film festival, with yet another entry from outside that year. While admittedly I did not attend every festival screening, of the seven features and six shorts that I did manage to see, less than an hour of the footage was shot during 1968. However, with the previous evening's closer, China is Near (1967), and that day's biggest surprise, Birds, Orphans and Fools (1969), the drift away from 1968 yielded many of the best moments of Sixty-Eight!. (For the record, the festival's best picture was Miklós Jancsó The Red and the White [1967] presented on a gorgeous new print; nevertheless, its inclusion irked me as it meant that Jancsó's rarely seen The Confrontation was elided -- maybe the 1968 film I would have most wanted to see.)

Zanussi's The Structure of Crystal compares most closely perhaps to another 1969 classic, Eric Rohmer's My Night at Maud's, though Zanussi has replaced the latter film's theological conversations with those of physics, and particularly the titular crystals. Then again, Zanussi has likewise diverged from Rohmer in that his conversations contain explicit ellipses: when the picture's two physicists begin discussing the historical concept of "infinity," for instance, the music on the soundtrack swells, even as stills of the various authors and books discussed grace the screen. In this way, the director is both condensing what might not be a terribly interesting conversation to most, even as he suggests that the film contains subject matter that cannot be directly expressed on screen (be it for both political and pyschological reasons). The Structure of Crystal is in fact a film that is very much concerned with interiority.


Indeed, The Structure of Crystal is also the second film in the series -- after Birds, Orphans and Fools -- to present a menage-a-trois, though here it is far more understated than in the high-key Slovak film. Again, these thoughts and desires burn, or at least smolder under the surface. Beyond this interest in the mind, a second point of comparison is the director's countryman Roman Polanski's Cul-de-sac (1965), wherein an explicitly existentialist sensibility and thought has been imparted in the picture. In The Structure of the Crystal it is the twin preoccupations of engagement and the feeling of waiting (for something to happen) that marks Zanussi as an heir to Beckett, Camus, Sartre, et al. -- the expansive horizons of the films' exteriors underscore the accompanied sense of isolation. To be sure, The Structure of Crystal is marked by dead time, which is occupied not only by the aforementioned conversations, but also by moments of play and levity, including a mimed athletic competition performed by the two physicist leads, a visit to town and to an erotic film, which is preceded by a newsreel depicting a shiny factory, and recounted later with comic visuals. Ultimately, it was the Sixty-Eight! film that I was most hoping wouldn't end.


***
While I can't also say this about Philippe Garrel's Le Révélateur (1967), I would say that at the very least that the nineteen year-old Garrel's sixty-minute silent possesses the same visual grace -- visible in the low contrast deep blacks and neon whites of his palette -- as his more recent, acclaimed Regular Lovers (2005). Actually, that recent Manhattan release could serve as a spiritual epitaph for Sixty-Eight!, and in a perfect world, would have closed the conference.
Posted by Michael J. Anderson at 12:29 PM