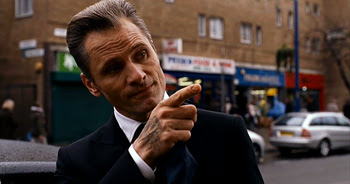 As Village Voice film critic J. Hoberman has pointed out (among others, certainly), David Cronenberg's Eastern Promises, from a screenplay by Steven Knight, is "very much a companion to A History of Violence [2005]." That is, like the director's earlier masterpiece, Eastern Promises examines the gap between surface - between the person that one appears to be - and sub-surface, or the conflicting/conflicted reality of the individual. Whereas A History of Violence utilized this distinction to craft a hero (Viggo Mortensen, as will be also the case in Eastern Promises) whose perfected exterior conceals a phenomenal capacity for violence, Eastern Promises reverses this equation to disguise - in the person of a Russian ex-con turned mobster - another whose peaceful proclivities may out-weigh his apparent sadism. In other words, as Hoberman likewise notes, we have another potentially schizoid, Cronenbergian hero.

In Eastern Promises, the process of concealment is achieved not only through the exigencies of character, but in the appearance of Mortensen's flesh itself. The actor is covered in prison tattoos - as we are told, purportedly commensurate with a Russian axiom, that the man without any tattoos "doesn't exist" - which narrate the story of his life. Indeed, in one of the film's pivotal set-pieces, Mortensen is tattooed with stars on his knees and over his heart to officially and inexorably initiate his character into the Russian mafia. However, this tattooing is revealed to be a set-up, a gambit on mob king-pin Semyon's (Armin Mueller-Stahl) part to pass Mortensen off as his dandy son (Vincent Cassel), whose life a clan of Chechen mobsters demand. His flesh is manipulated to deceive. Of course, the fact, as will be revealed subsequently, that Mortensen is an undercover agent dictates that the very story inscribed on his flesh is itself a lie.

Even so, the violence his body suffers, whether or not under the auspices of undercover work, are entirely authentic. In the film's most notorious set-piece - its truly extraordinary bath house hand-to-hand combat sequence - the wounds that Mortensen's Nikolai incurs are very real indeed (as were the bruises to the film's nude star). His body is here subject to an extraordinary, disfiguring violence, even if it doesn't quite compare to that he inflicts on others: namely, in the dead mafioso's fingers that he clips off or in the Chechen's eye that he stabs only inches in front of the camera lens. This is a film of grotesque, hyperbolic violence - of slit, truly gaping necks - that somehow still succeeds in shocking thanks to the suspension of disbelief entered into by its horror-trained audiences.

Speaking of Mortensen's flogging, his body, as film scholar Lisa K. Broad suggests, is made to suggest that of Christ's crucified figure, replete with an incision on his side. In fact, Broad notes that Russian iconography is emphasized throughout the work, be it in the impregnated Virgin who sparks the film's investigative story line or in the frequent close-ups extracted from background detail that call attention to the traditional form of the icon. (Indeed, Mortensen, in the first indication that his character may exceed his obvious villainy, hands a prostitute an icon portrait - imploring her to stay alive a little longer.) And as Hoberman notes, apropos of its iconographic content, this is "a Christmas story complete with a miracle." We have our Holy Family.

Then again, comparisons to icons aside, Cronenberg's style is foremost an instantiation of a profoundly old-fashioned classical Hollywood continuity technique of editing. With metronomic regularity, Cronenberg establishes his scenes with a long or lateral tracking shot, cuts in to a two-shot composition and then into a shot/reverse-shot schema - before re-establishing and again launching into subsequent articulations of the same technique. (Broad additionally notes that Cronenberg frequently utilizes wide-angle lenses, as is typical of his visual style.) Even so, Cronenberg calibrates the framing lengths of his shot/reverse-shot pattern to accentuate singularities of the various character relationships that he shows in dialogue. In other words, while there may be no passages that explicitly exceed the bounds of classical continuity editing as does the opening, thematizing real-time sequence of A History of Violence, Cronenberg's minor manipulations of classical style maintain the expressive individualities that exemplify this technique at its very best.

Then again, Cronenberg does seem to find a second model for his decoupage in the bath house sequence - according to Broad - beyond that of classical-era Hollywood: namely the perfected analytic editing of Robert Bresson and Pickpocket (1959). That is, in striking comparison to The Bourne Ultimatum (Paul Greengrass, 2007), again in the insight of Broad, where the most visible moments are felt rather than seen, Eastern Promises shows us far more than we would ever have the opportunity to see (secured through a series of clarifying close-ups). Indeed, what we see often shocks in Eastern Promises, through its sheer gratuity, often coupled with the most old-fashioned of forms. Actually, one could argue that the film's use of English, French and Polish speaking actors to create a milieu entirely foreign to them and the film's Anglo audience trades in the same evocations of an earlier moment in Hollywood filmmaking.

In sum, Eastern Promises may just be the English-language film to beat in 2007. It is also one of the director's better efforts, placing just below career peaks Dead Ringers (1988), A History of Violence (2005) and the highly-underrated Spider (2002). Importantly, Eastern Promises, like Spider, clarifies one of his earlier themes - this time on the tattooed flesh of the director's newest axiomatic split performer.
Posted by Michael J. Anderson at 10:55 AM

Labels: Cronenberg and B-movies, Gap between surface and sub-surface in film

I don't know, I was pretty disappointed, it's interesting how it manages to pull through the miscast, but it's definitely not as involving or gripping as the maybe not so eye-candyish "The Brood" and it does not leave me much food for thought as eXistenZ did.

I think it's one his most mediocre