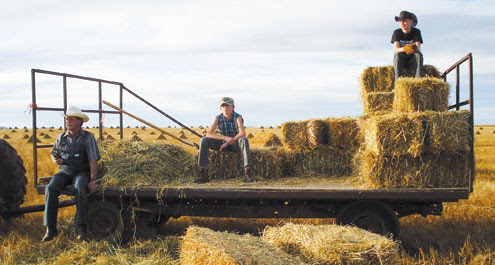 Carlos Reygadas's Silent Light (Stellet Licht), purportedly "the world’s first talking picture in the medieval German dialect called Plautdietsch," commences with a view of a nocturnal, star-filled sky. As the take proceeds, Reygadas and cinematographer Alexis Zabe's camera circles downward, tracing the invisible convex surface that separates the terrestrial from the celestial beyond. As the take becomes static, a pitch-black void replaces the previous sky-scape. However, accompanied by the increasing auditory din of chirping crickets and yelping dogs, the sun slowly begins to rise over the Chihuahua landscape. Pink clouds emerge over the distant panorama; middle-ground trees pop as if black cut-outs from the newly emergent landscape. As the camera zooms forward, Reygadas and Zabe capture the Mexican sunrise with a truly breathtaking range of hues and tones. The miraculous workings of nature, regulated by the invisible hand of its creator, are here our introduction to the filmmaker's "metaphysical" melodrama to follow.

Moreover, Reygadas also acquaints us with the film's rigorous formal template within this opening long take. On the one hand, we have the first of the circling camera movements that appear periodically in Silent Light, which moor the film to its most conspicuous source, Carl Th. Dreyer's 1955 supreme masterpiece Ordet (a special thanks to a Yale colleague of mine for reminding me of this fact), as well as allegorizing the film's own circular structure; on the other, we have the first of the film's ubiquitous surface-sub-surface relational dynamics, where the film's metaphysical thematics are most directly evident. In this instance, it is the division of heaven and earth again that is being underscored. While obviously it is within the former that the subsequent narrative unfolds, incursions of the heavenly sphere are reworked into the film's penultimate - and most overtly referential - scene.

As the narrative proceeds from this opening heaven and earth magic, Reygadas transitions to the Mennonite household that will provide the narrative with its protagonists. From the first, it is immediately clear that flatness will define the film's visual strategies. In this way, Reygadas relies every bit as much on that second master of the filmic metaphysical, Robert Bresson, for the visual lexicon of his work. This is a film that explicitly positions itself within the traditions of the religious European art film. Of course, the picture's structuring surface-sub-surface relationships are likewise a borrowing from film's greatest creator of religious artifacts, Bresson.

Then again, Reygadas does not simply adopt these formal strategies, but remakes them for his extension of the cinematic transcendent. On the one hand, Reygadas's camera moves into flat, shadow-obscured fields, as in a sequence at a garage, to penetrate the surfaces that his work so insistently creates. (At moments, Silent Light seems to most clearly evoke Robert Bresson's The Process of Joan of Arc [1962] and its emphasis on surface fissures - in its case, graphically, the holes and crannies that punctuate a stone wall; separately, as in the male protagonist's appearance in the house of a woman other than his wife, Dreyer's spatial disorientations from his 1928 picture on the same French subject become the guiding inspiration.) On the other hand, and much more significantly, Reygadas introduces another variation in the relationship between surfaces and what they contain in his insistent referral to the surface of the camera lens itself. Routinely, for example, Reygadas and Zabe capture prismatic lens flares, which it must be added attain a particular pictorial grace. Similarly, in one of the film's more dramatic encounters between husband and wife, torrential rains stream down the surface of the lens, thereby grounding both the glass surface of the apparatus and what exists beyond it, the space it is filming.

All of this is to say that Silent Light seeks to figure visual - and in the case of the opening shot, invisible - mediations and what they mediate, be it the inexpressive exteriors of the film's performers or once more the apparatus itself. In fact, with respect to the former, Reygadas in the film's post-screening question-and-answer, indicated that he coached his actors to feel what they, in the situations of their characters, would feel, without outwardly expressing these same emotions. That is, even in the level of direction we find an insistence on promulgating the reality beneath and behind the visible.

Of course, Silent Light nonetheless secures much of its effect from its documentation of Mennonite routine, as for instance in the wonderful extended bathing sequence near the middle of the film. This is to say that Silent Light seeks to both ground its narrative in the particular terrestrial experience of its characters, while highlighting the invisible structures that maintain the life that we see. Suffice it to say then that the film's defining penultimate event, while breaking from the film's ostensible exteriority, partakes in the same dynamic that incurs throughout the film. In its case, the simple surface-sub-surface relationship of the individual figure is buffeted by the much grander heaven-and-earth contradistinction that the opening shot intimates. It is at this juncture, in a moment of the unequivocally miraculous, that an invisibility hinted at in the beginning of the film and suggestively present throughout, finally and spectacularly asserts itself. This culminating moment is also one of the contemporary cinema's most overt moments of photogenie.

Having said that, this event relies on a presumably human agency for its coming into being. Without spoiling the film's conclusive moment, it may still be noted that Reygadas mixes the sacred and the profane at this pivotal instance, thereby reinforcing a similar strategy in his Battle in Heaven (2005), a work like the latest that finally highlights human sacrifice. Still, it is perhaps his previous, superior Japón (2002) that most often reverberates in Silent Light - particularly in the rural landscapes and traveling automotive takes that evince the director's unmistakable debt to one of the spiritual cinema's more recent proponents, Abbas Kiarostami. Like with that director's work, Reygadas's is rooted in the particularity of the film's settings, which in their case were recommended for their extreme climatic variations. (In addition, the awareness of the camera in Silent Light, both in the lens flares and also in the performances directed toward and addressing the apparatus and filmmakers, likewise speaks to Kiarostami's influence.)

In the end, however, these settings are only half of the very large, metaphysical equation. For the film's staggering ambition, and even more for its rigorous reinterpretations of forms that are suitably melded to content, Silent Light is not only Reygadas's best film (by a substantial margin) but is easily one of the year's best to date.
Posted by Michael J. Anderson at 11:31 AM