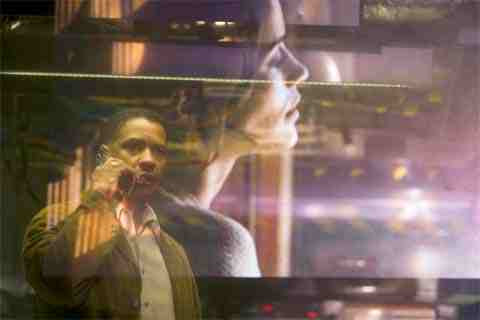 [i] André Bazin made the analogy of cinema to a mirror “that relays the presence of the person reflected in it – but… with a delayed reaction” in “Theatre and Cinema – Part Two” (Bazin 97).
[ii] Déjà Vu does not, as might be expected, question the reliability of this earlier experience.  At no instance in the film are we given any indication that either Carlin or any of his colleagues doubt that he saw the woman dead.  Rather, her earlier death is stipulated as fact both in the film’s investigation and also in our understanding of character motivation and psychology.
[iii] Minority Report’s  future temporality is hallucinated, so to speak, by the film’s “Precogs” – a floating trio, whom one character classifies as “more than” human.  These Precogs have the ability to intuit future murders at variable distances from the present, which are thus recorded and deciphered by the film’s “Precrime” unit on a series of interactive, holographic screens.  With this data, the film’s law enforcement officers not only prevent homicides (specifically) from occurring, but prosecute those who would have been guilty of the crimes.
[iv] Thomas Elsaesser, in fact, classifies Cruise’s Anderton as a “rube” inasmuch as he attempts “to ‘touch’ his missing son” (Elsaesser 219).  For the author’s definition of the “rube,” see endnote 6.
[v] Namely, Spielberg reveals that it is possible for one of the three Precogs to disagree with the other two – as to how or if a murder will occur – thus creating one of the film’s eponymous “minority reports.”  The film indicates that these visual files can represent future actuality in spite of their minority status.
[vi] The “rube” film, according to Elsaesser, “emerged with the origins of the cinema itself, at the turn of the century, first in Great Britain and the US, but similar films were also produced in other countries.  They often presented a film-within-the-film, that is, they showed a member of the cinema audience, who does not seem to know that the film images are representations to be looked at rather than objects to be touched and handled or scenes to be entered and immersed in.  These so-called ‘rubes’ or simpletons usually climb up to the stage and either attempt to grasp the images on the screen, or want to join the characters on the screen, in order to interfere with an ongoing action or look behind the image to discover what is hidden or kept out of sight.  The best-known example of this genre is Uncle Josh at the Movies, made by Edwin S. Porter for the Edison Company in 1902” (Elsaesser 211-212).
[vii] As Bazin puts it: “It is like the eye of God, in the proper sense of the word, if God could be satisfied with a single eye” (Bazin 88).
Works Cited

Dying for your "Unstoppable" review now. Was skeptical at first, having been pretty underwhelmed by 'Pelham,' but think it's actually a major return to form—similar social issues addressed with more finesse, and action filmmaking with much more verve and painterly detail.

A friend has a theory that 'Pelham' and "Unstoppable" were being developed at the same time, and that the former might've suffered from the strike. I'm not sure how true that theory is, but it does kind of make sense to me, even if that film has its moments as well.

Thanks, Sam. I am extremely excited to see (and review) the film myself - by mid-week, I hope. Since I was not able to manage it this past weekend, I thought I would belatedly post this piece - something that Prof. Elsaesser recommended I do awhile back. (I wrote a version of the essay as a term paper for his class in the spring of 2008.) I'm happy you enjoyed it, and that there is some love for Tony Scott these days among connoisseurs like yourself... that is among people who can also appreciate Aurora.