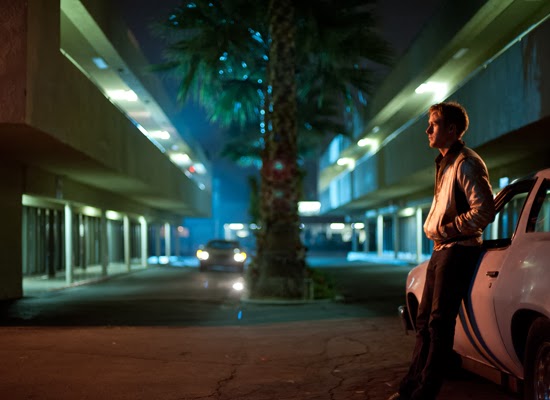 Testifying convincingly to the New Wave axiom that superior sources breed better art, Nicolas Winding Refn's Drive, from Hossein Amini's fine adaptation of James Sallis's novel, compiles more than four decades of action-film antecedents for a work overwhelmingly lauded as an exercise in consummate style, in cool, when not (or not also) derided as an empty example of the same. With Jean-Pierre Melville, Martin Scorsese and late Cronenberg, Oldboy (2003) and a very pointed Mr. Arkadin (1955) reference - which happens in this instance to be both signposted and embroidered - all providing motival filigree, the real substance of Refn's generic inspiration flows from Drive's proximate namesake, Walter Hill's The Driver (1978), as well as from Michael Mann's masterful celebration of Los Angeles at night, Collateral (2004). Combining the professional acumen, not to mention the getaway profession of the Hill - as well as a very striking resemblance between the two unnamed male leads, Ryan O'Neal in The Driver and Ryan Gosling in Drive respectively; both are credited only as "The Driver" - with Mann's fluid aerial mapping of the glowing cityscape in high-definition digital, Drive pays conspicuous homage to some of the most elegant mid-level auteurist action filmmaking of the forty year-old Danish director's lifetime, that is, to the American formalist tradition that Refn very ably extends.

Drive opens with one of the finest pre-credit sequences in recent film history: an essentially complete representation of the first of the film's getaways, with Gosling executing throughout with absolute precision. Befitting the Hill source once more, Gosling is the best at what he does, a professional in the mold of the aforesaid's stagflation-era transformation of Howard Hawks. Refn paints Gosling's expert split-second decision-making in an economy of close-up inserts of the poker-faced, toothpick-chewing lead and in over-the-shoulder set-ups that chart the hazy, low-key Los Angeleno side streets that Gosling has fully mastered. As he alternately flies and slinks out of view, Gosling's complete attention is calibrated to successfully elude the police dragnet that emerges moments after the heist concludes; to this end, even a seemingly distracting Los Angeles Clippers basketball game on the radio, which Gosling happened to have been watching at home prior to the start of the job, is used to free the lead and his two freelance employers from their pursuers (thanks to a perfectly timed arrival at Staples Center). As Gosling disappears into the departing masses, Refn cuts to gliding overheads of the nocturnal city, scored electronically by Cliff Martinez as the credits appear in cursive hot pink. In so doing, Drive synthesizes its two primary sources once again, bringing together the signature visuals of Mann's opus and Hill's larger late 1970s, early 1980s historical moment, both musically and graphically.

As Drive progresses, Gosling is revealed to work under Bryan Cranston's good-natured if also ethically impaired and down-on-his-luck garage owner and stunt director, in both of the latter's ventures. Cranston warmly confides to Carrie Mulligan's radiant married love interest Irene that he has been underpaying Gosling for years, while on the set, the latter is compelled to wave his right to seek legal restitution should the rollover he is about to perform goes poorly - after Cranston takes half of his $500 bonus; naturally, given again his extraordinary professional ability, the rollover does come off. The exploited, working class Gosling's life, in other words, proves to be of very little worth compared to those stars for whom he is performing the stunts. In this respect, Refn introduces both a backdoor social consciousness, commensurate with the work of Hill and even Mann's Collateral, as well as an interest in the periphery of celebrity culture that likewise provided a somewhat unsatisfying emphasis in the director's earlier Bronson (2008). Of course, Bronson and especially the stronger Valhalla Rising (2009) converge even more closely with Refn's latest in the brutality that ultimately overtakes Drive's narrative, with Gosling proving as capable with his clenched fists and a shower curtain rod as he is behind the wheel.

While Gosling's steely, if occasionally vulnerable performance quite effectively grounds Drive, Refn's co-stars and supporting players manufacture much of the film's moment-to-moment richness, beginning with Mulligan's sunny allure as the focal point of the film's romantic triangle. Cranston's hunched and weathered, though also sympathetic turn as Shannon is as Academy-worthy as any - no surprise from one of television's finest actors since his "Malcolm in the Middle" days - Christina Hendricks is well cast as a small-timer's Moll (her personalized nameplate earrings seem a good latter-day match for her impossibly curvaceous physique) and Ron Perlman and Oscar Isaac each effectively add tension in their antagonistic roles.  Finally, in yet further confirmation that Refn has somehow occupied this writer's subconscious in casting his film, Albert Brooks casually dominates the screen as ex-film producer cum gangster Bernie Rose (in precisely the type of role that the specifically late middle-aged Brooks was born to inhabit). Brooks's Rose, likewise, extends the film's late Carter, early Reagan-era reference point both within the diegetic world of the film itself - he claims to have produced  film actioners in the 1980s that one critic identified as European, not unlike the Dane Refn's twinned primary generic sources Hill and the Mann of Thief (1981) - and certainly extra-diegetically in the presence of that era's superlative comedic director Brooks. Refn as such remains remarkably loyal and thorough in his reformulation of his preferred generic moment, an era that he seems intent on (and capable of) reviving single-handedly as that period replays itself economically and socially in the early 2010s.

A special thanks is due to site co-author Lisa K. Broad for her input to this piece.
Posted by Michael J. Anderson at 1:07 PM