Special to Tativille: "Sunset cul-de-sac? (The Artist)," by Jeremi Szaniawski 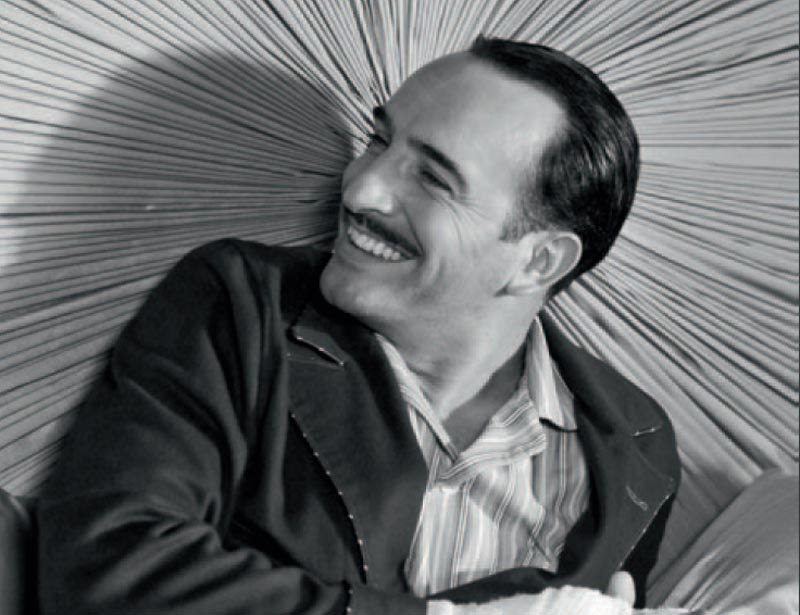 In 1927, Hollywood silent film star George Valentin (Jean Dujardin) unwittingly helps launch the career of smitten—and ambitious—dancer and starlet Peppy Miller (Bérénice Bejo). Little does Valentin know that the advent of sound film will soon render him obsolete, while Miller will become the new darling of his former studio. Valentin refuses to embrace the talkies, is driven to bankruptcy by the 1929 crash, and fails to conquer the box office with his final, self-financed silent film. Even so, his fall is halted by Miller’s financial support and care. But can the actor, given his resistance to new technology, ever make a comeback?

Grounded both in the tradition of melodramatic narratives and actual cinema history (the fall of its hero inspired by the similar fates of silent stars John Gilbert or Douglas Fairbanks, Jr.), set in an era of economic depression and technological shift in the film industry, The Artist (2011) could scarcely have been made at a more sadly appropriate moment. Therein however lies the suspicious aspect of an apparently sincere celebration of the first golden age of cinema, arriving at a time when most theaters around the world are trading 35mm for digital projection—and those who can’t afford the new technology can go quietly out of business. In this context, there is something almost sacrilegious, yet also painfully logical, about the inconsequential levity of the film, just as there is great irony about watching it in any format other than 35mm. To be sure, the deliberate softness and graininess of its cinematography are only done full justice on this soon-to-be-defunct format.

The film’s script itself clearly allegorizes the shift to digital and the loss it implies. Following a fire at Valentin’s home in which all his films are burned, Miller takes the only can of film that he salvaged from the fire, only to realize that it is a discarded scene of their one appearance on the screen together: his silent love declaration to the young woman. Such a diegetic moment, it is clear, would not have been possible in the digital age. In another scene, Valentin finds all his belongings carefully collected from pawnshops and at auctions by Miller, stored in a room of her Beverly Hills mansion, evoking the preservation and potential subsequent oblivion implied by digital storage.

There is nothing far-fetched about these observations. Director Michel Hazanavicius has a knack for using pastiche to comment on the present day situation, as attested to by his marginally amusing OSS 117 series—a parody of the 1960s James Bond franchise which criticizes French racism and bigotry (and like The Artist, also stars Dujardin). With this latest effort he has surpassed himself in terms of high concept: opting to make a silent film about the early years of talkies, instead of a sound film about the twilight of the silent cinema. Yet this explicit, inverted nod to Singin' in the Rain (1952) somewhat condemns the film to being an ironic, postmodern palimpsest, or, worse, falling into the derivative category of the spoof.

In earnest, one would love to love The Artist, which, at its best, is extremely endearing melodrama pastiche. But in spite of its seductively reconstructed universe, its script is glib and many scenes overly indulgent. In a way, the film as a whole replicates the self-congratulatory, hammy nature of its lead protagonists—but also, beyond their narcissism, their unlikely boneheaded likeability. With the added exoticism brought about by the revisiting of Hollywood by French eyes, and with French actors (this Gallic input providing the final joke of the film—and the founding argument behind Valentin’s resistance to sound technology: his thick French accent), one would gladly embrace the cheerful silliness of it all, had the film not been so incoherent in its referencing of film history.

The Artist is rife—of course—with quirky references to silent cinema techniques, and amusingly plays with the inversion of silence for sound (and these instances are by far preferable to Ludovic Bource’s often arch score). But for a film investigating the moment in time when the cinematic medium reached its apex in terms of visual plasticity and poetry, it displays a painful lack of coherence and purity: the film haphazardly blends visual quotes from King Vidor, Fritz Lang, FW Murnau, Fred Niblo, Sergei Eisenstein and Frank Borzage silent classics with shots straight out of 1940s cinema, most notably the dinner-table montage scene from Citizen Kane (1941). Elsewhere, the film references even the late 1950s: Valentin watches scenes from his own films on his home projector, inescapably evoking Gloria Swanson in Sunset Boulevard (1950); a nightmare scene evokes Wild Strawberries (itself an homage to silent cinema; 1957); and the soundtrack rather counter-productively quotes Bernard Herrmann’s ‘Scène d’amour’ from Vertigo (1958) in one protracted key sequence.

While the first part of the film is brisk and well paced, the second half tends to indulge more in this gratuitous quoting of silent classics, slowing down the plot’s progression with repetitious moments, so that the film’s own professed love of cinema proves to be its undoing. This does not detract, however, from its cast’s unquestionable charm (and, in Dujardin’s case, innate physicality), with Bejo resurrecting some of the young Joan Crawford’s sex appeal and pizzazz, and the score of Hollywood actors in bit parts (John Goodman, James Cromwell, Penelope Ann Miller, Ed Lauter, Malcolm McDowell) providing a very solid supporting cast to the action, emphasizing the self-referential nature of the film. Here, one should point out Goodman’s excellent performance as a partly debonair, partly tyrannical studio executive, and, even better, the little dog Uggie, quite irresistible as Valentin’s faithful sidekick both on and off screen, running to its master’s rescue in another borrowing from a classic cinema trope.

Silent cinema has already been revived in the post-silent period century (Aki Kaurismäki’s Juha [1999] a fine example), and it is a good thing that this film should receive wide acclaim, but let us not be fooled: if the film reaches its target, it is only by mistake. A telling anecdote dates from the early 2000s, when the mercurial producer Thomas Langmann (son of Claude Berri), furious that Guillaume Canet turned him down on a project, went up to the actor’s apartment and punched a guest of Canet’s who had the misfortune of opening the door, mistaking the unfortunate man for the actor—not knowing even, perhaps, what the actor he wanted for one of his projects actually looked like. Much like Langmann, The Artist lacks genuine refinement and taste, and further discernment, and confuses what it is willing to celebrate (silent cinema) for what it ends up producing, namely a pastiche potpourri of Hollywood classic cinema. In spite of appearances, and the obvious encyclopedic amount of documentation that went into reconstructing the universe of the film, The Artist’s authors know a lot about the look of early and classic cinema, but ultimately very little about the essence of the fine object they quote with such zeal. If the paraphernalia, costumes and visual charm of the silent era are certainly present here, the philosophy that elevates cinema to an art form is all but missing, and the freshness of the times is only recreated with a strong scent of formaldehyde, beautified with naively smiling clichés, tongue rooted firmly in cheek. It seems as though to the authors of The Artist, silent cinema was merely this warm and fuzzy, but ultimately somewhat stupid, panache-filled but immature art form. So that the bittersweet melancholy the film elicits, beyond the kitschy mish-mash of iconic imagery, has more to do with the death of a medium than the revived glory of melodramas of yore. Sunset Boulevard has become Sunset dead-end, or cul-de-sac, as the French call it. But it is a pretty nook all the same, and bric-a-brac has its charm, too. Warned that it is that (and, again, an obituary) that they are looking at, many should still go and enjoy the undeniable qualities of The Artist.

The author wishes to thank Michael Cramer and Marcelline Block for their help copy-editing this piece.
Posted by Michael J. Anderson at 4:32 PM