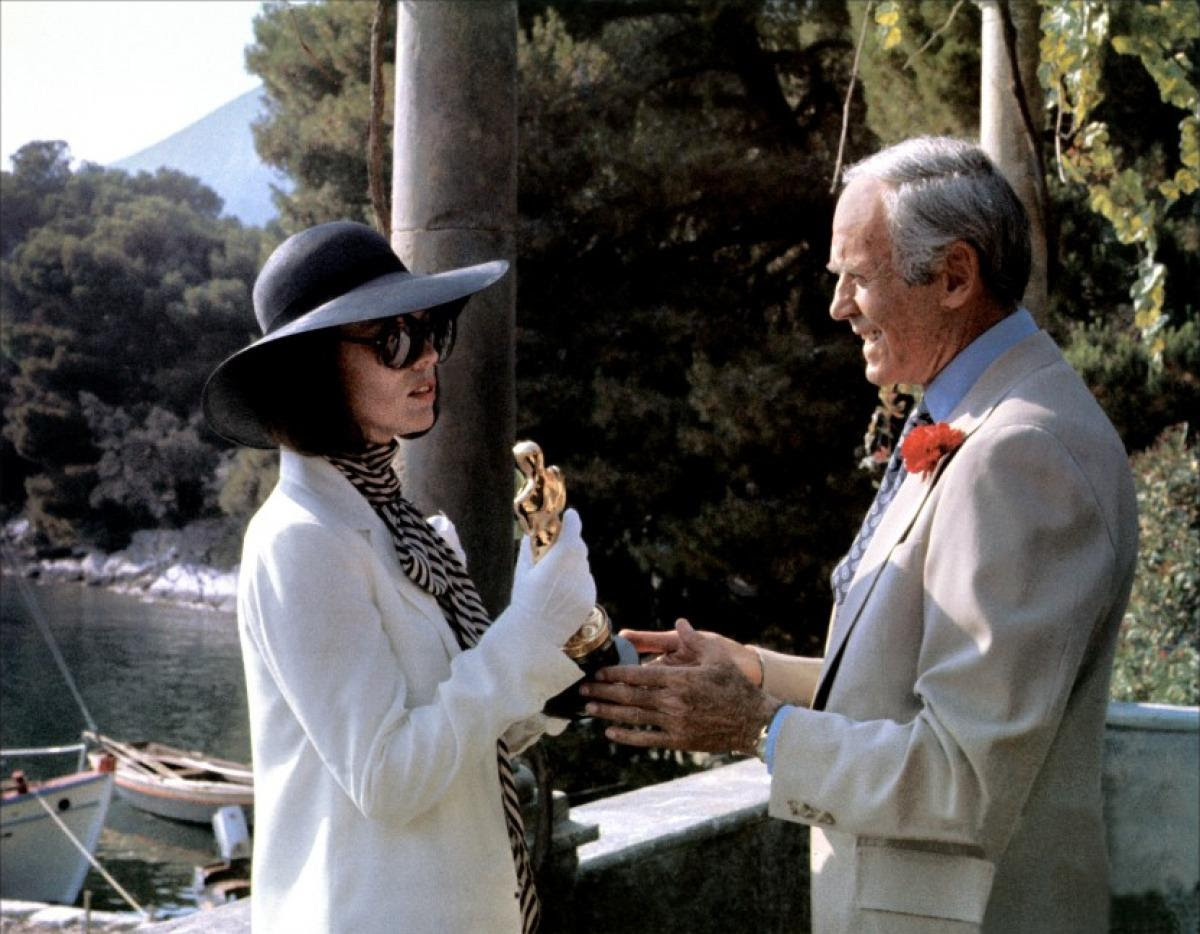 Produced a little more than a quarter-century after his Sunset Boulevard (1950) requiem for a long deceased silent art, Billy Wilder's penultimate Fedora (1978), from an I.A.L. Diamond and Wilder adaptation of a Thomas Tryon story, does the same for a no less historic classical Hollywood cinema. In fact, following a brief rear-projected death scene and television news montage, Fedora opens with the body of its eponymous heroine (Marthe Keller) lying in state, as parades of mourners come to glimpse and pay their last respects to one of the silver screen's greatest icons. Eulogizing star and also studio, Fedora is a funereal cinema, presided over, like Sunset Boulevard, by William Holden's first-act narration. Indeed, it is the era of Holden and not Swanson, Wilder and not Erich von Stroheim whose passing Fedora both depicts and signals - with the writer-director's feature exclusively financed by French and West German money, shot on location in these same nations and on the island of Corfu, and starring the Swiss born Keller (whose body-of-work spanned a number of national cinemas).

Flashing back two weeks from the opening Parisian-situated funeral, Holden's down-on-his-luck producer Barry "Dutch" Detweiler arrives on a sun-bleached Corfu in search of reclusive, retired screen star Fedora. As the spectator will soon learn, thanks to a subsequent flashback-within-the-flashback, Fedora and Dutch had a one-night stand decades earlier when the legendary screen beauty seduced the young assistant director after the latter was employed to cover her exposed nipples during an aquatic back-lot shoot at Metro. Through this Mediterranean setting, Wilder's film strongly recalls the director's under-appreciated, Amalfi-situated Avanti! (1972), as well as Jean-Luc Godard's deeply self-reflexive, Hellenic predecessor Contempt (1963). As Dutch attempts to contact the mysterious female lead - who, on the rare occasion of appearing in public, sports the same wide brimmed hat and dark sunglasses as Karen Black in Alfred Hitchcock's fine Family Plot (1976) - Wilder and cinematographer Gerry Fisher's lighting favors the over-saturated, blown-out look of the cemetery sequence in the aforementioned master's Vertigo (1958), not to mention the mid-1970s look of Hitchcock's final feature. The earlier masterpiece will especially prove cardinal to Fedora, however, with a mid-narrative plot reversal procuring a very similar reflexive interest in the production of the film's focal object of desire, namely that of the female film star, whether it is explicit as in Wilder's film or implicit as in Hitchcock's.

Dutch does manage to cross paths with Fedora shortly, where he discovers that his former lover has remained almost ageless in the three decades since their previous meeting. Reminding her of the past, Dutch mentions Metro-Goldwyn-Mayer, which prompts to Fedora to respond: "that's all gone now, isn't it?" Dutch, an independent producer, confirms that it is, noting that they sold the back-lot and auctioned everything off years ago. When consequently Dutch joins Fedora and the Countess Fedora Sobryanski (Hildegard Knef) at their prison-like estate (in another direct quotation from Wilder and Holden's previous collaboration), he admits that he needs Fedora to secure financing, noting that he has located tax shelter guys so long as she is willing to come out of retirement. Dutch rues the fact that "it's a whole different business now" and that "the kids with beards have taken over," in an acknowledgement of the new generation of "movie brats" that were at that very moment replacing the retiring and passing Hitchcock, Wilder, et al. As Fedora's male lead puts it, in conspicuous opposition to writer-director Wilder's preferred mode of filmmaking (both as director and previously as one of the industry's great screenwriters), "they don't need scripts; just give them a hand-held camera with a zoom lens." Fedora's complex, archly-baroque flashback structure - in this sense Wilder remains forever a product of the late 1940, early 1950s film noir moment, of the age of Sunset Boulevard that is - told in unrelentingly classical shot/reverse-shot decoupage stagings, preserves the earlier mode, which is to say the type of film practice that would come to a conclusion with the passing Wilder's artistic generation.

As Wilder and Diamond's screenplay puts it, "I guess time catches up with all of us." That is, all of us except for Fedora, as Dutch notes, who again looks no older than she did when they spent the night together on Santa Monica beach in 1947. The filmmakers' immediate explanation for Fedora's timelessness, which it should be added inverts Sunset Boulevard's presentation of Swanson and her fellow silent cinema cohorts, is the extensive, experimental plastic surgery that Doctor Vando (José Ferrer) has performed on the actress over the course of a number of years. In another flashback to the early 1960s, following the film's key mid-point reversal, the viewer sees Fedora's face wrapped in bandages that for the contemporary spectator may call to mind Pedro Almodóvar's The Skin I Live In (2010) synthetic variations, as will Fedora's scribblings of her name in one notebook sheet after another. To this end, it should be recalled that Almodóvar has cited Sunset Boulevard, Fedora's dialogic partner, as one of his favorite films, making the latter a plausible additional source of inspiration for the Spanish director's queer appropriation of Vertigo's human remodeling. Indeed, it would seem that Fedora no less than mediates The Skin I Live In's mannerist, post-plastic surgery take on Hitchcock's masterwork.

While Fedora ultimately cannot escape the ravages of time that likewise defeated her Sunset Boulevard predecessor Norma Desmond, she does manage to die young, so to speak at least, in the same fashion as those she calls the "lucky ones," Jean Harlow and Marilyn Monroe. Of course, to do so it takes a plot twist that this writer is not keen on spoiling. Suffice it to say that this move allows for the divesting of the person from the star persona she inhabits in a manner that is more classical though no less self-reflexive than Jacques Rivette's period Pirandelloism's. In this sense Fedora is a movie of its high modernist moment, even as it looks to the past, to a cinema whose death it was expounding in using its very form. Here again this career peak for Wilder becomes a film of an era, which is to say of the classical Hollywood cinema's sunset years.

For the moment, Fedora remains available in the United States only on out-of-print videocassette and laser-disc formats. However, rumor has it that Frank Tarzi's Olive Films has licensed a high-definition remastering of Wilder's 1978 picture for future home video release.
Posted by Michael J. Anderson at 2:22 PM