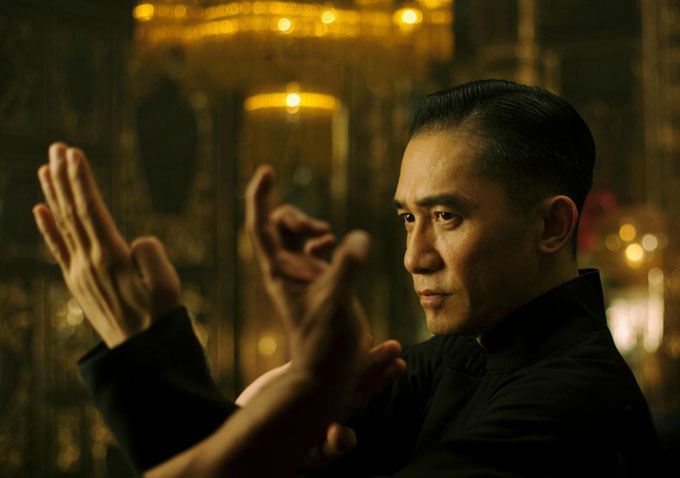 The first evidence or rather confirmation to reach the United States that two thousand thirteen belongs foremost to the world-class masters of the Sinophone cinema, Wong Kar-wai's The Grandmaster (Yi dai zong shi, 2013) is quite likely to prove the most unambiguously pleasurable achievement in Greater China's very big year. An epically structured, elegantly staged Ip Man biography that opens on the brief 1930s rapprochement of China's northern and southern martial arts schools, Wong's first magnificent feature in six years soon develops into another of the auteur's signature star-crossed opuses, with Tony Leung's Wing Chun grandmaster falling for the exceedingly skilled daughter (Zhang Ziyi) of an aging northern legend. Following Ip Man's ceremonial defeat of the latter in the opulent, mirror-filled interior of the Golden Pavilion, a brothel and martial arts social club in the Cantonese city of Foshan, the hero and heiress Gong Er stage their own combat exhibition, despite period prohibitions that forbid women from fighting.

The resulting set-piece represents not only one of Ip Man's few matches with an equal, but indeed the lone occasion in which he is bested by an opponent. Of course, it comes in an exchange that Wong infuses with an ecstatic sensuality, where Ip Man clasps the female lead's wrist and where Gong Er circles above her fellow combatant, as their faces come within a hair's breadth of touching. With hand-to-hand combat thus providing a metonymy for the sexual act, Ip Man and Gong Er's exchange proves one of The Grandmaster's rare consummated unions, where two appropriately paired figures meet, in Wongian discourse, at precisely the right time of life.

The married Ip Man's consequent attempts to renew his relationship with Gong Er are thwarted first by the sudden onset of the Japanese Occupation, and later by Gong Er's private vows to avenge her father's death. Their time, in other words, will never again be right - in much the same way that the Ip Man's various master opponents all-to-often challenge the Southern hero far too late in their own professional existences. In this regard, The Grandmaster morphs into a martial arts variation on the filmmaker's middle-aged masterpiece, In the Mood for Love (2000): Ip Man and Gong Er's time will pass before they (in their case) renew their acquaintance in the colorized Hong Kong of the early 1950s. Fate will prevent their permanent romantic happiness.

As the above attests, The Grandmaster, like every great Wong, is all about time. Time as it is refracted through Ip Man and Gong Er's frustrated romance or in Ip Man's equitable and ill-matched contests alike, but time also it is expressed in Wong's archetypal aesthetic, in the step printing process and slow motion effects that filters and pulls time apart, investing the instant and the momentary - which is to say the true substance of Wong's art - with an added weight. The film's focalized temporal register is also felt in the de-saturated photos that freeze similar points-in-time, not to mention in the voice-over narration that implies some indistinct point in the future from which Ip Man in particular reminisces about his great unfulfilled love. The Grandmaster, in short, is at once an object of temporal manipulation and reorganization and an attempt, however vain, to recapture time that has been lost.

Wong's visual strategies equally serve the filmmaker's excessive attention to surface appearances and his commensurate fetishism: in the film's expert opening action set-piece, a cascade of individual raindrops slice off the side of Ip Man's brimmed white hat, thus providing as concentrated a site for pure spectacle as the combat itself (which in the scene's under-lit staging will prove more two-dimensional than three, more a matter of surface than of depth). In the amber corridors of the Golden Pavilion and on the snowy rail platforms of the north, Wong turns his attention to the way in which his performers' footwear slides across the hardwood and through the light powder, again making extensive use of slow-motion to emphasize his visual subject. Finally there is the film's truest fetish of all, the coat-button that Ip Man saves and ultimately gives to Gong Er to commemorate the reunion that the Occupation repressed. It is in other words visual evidence of his enduring passion.

For all its interest in the interior and the imagistic, The Grandmaster makes skillful use of the more conventional features of film language. Indeed, in what might be termed Wong's post-classicism, the director makes special use of his block strategies within his shot/reverse-shot editing chains: as Gong Er and her father's former protegee face off in one of the film's most heated confrontations, each occupies the edge of the frame  that they look off, thus visually implying their increased interpersonal aggression. Likewise, when Ip Man and Gong Er meet for the last time, Wong sets each of the two characters in the same left-center position in the wide screen, suggesting the same affinity that the narrative otherwise establishes. Wong accordingly makes master (if intensified) use of classical continuity editing.

Elsewhere one might cite the film's sterling star chemistry, vivid secondary characterizations, assured hand-to-hand stagings and moving musical cues as evidence of Wong's supreme mastery of a convention mode of screen entertainment - to augment Wong's always personal discourse. Recalling the epic early 1990s pinnacles of China's Fifth Generation, not to mention Hou Hsiao-hsien's supreme Sino masterpiece, Flowers of Shanghai (1998), The Grandmaster is both the latest ecumenical attempt at forging a combined Chinese identity in its shared historical experience and also a founding-myth narrative for Wong and Leung's Hong Kong home.