The Poetic Gesture and Tropical Malady

At the conclusion of Chantal Akerman's feminist masterpiece, Jeanne Dielman, 23 Quai du Commerce, 1080 Bruxelles (1976), the titular protagonist, a housewife and prostitute, murderers one of her john's. This sudden act of violence shatters the prevailing transparency of Akerman's work: to this point her narrative has been a kind of Sisyphus with spuds, rendering the crippling banality of Jeanne's life in a series of static, one shot-one sequence takes. Her life consists of cleaning her house, preparing meals for her son, running errands, and performing sex acts on her afternoon clients. (As glib as I might make it sound) the underlining point to this objective representation of her routine is quite obvious: to underscore her psychological inquietude and to reveal the fundamental incongruities produced by her attempt to remain a doting mother and provider for her student son.

However, Akerman moves beyond a simple description of Jeanne's emotional state with the concluding murder. Unlike the acts of prostitution which are woven into her daily routine, this violence represents a definitive break from the everyday, in turn providing the film with its political meaning. And yet the preciseness of this gesture's meaning remains unclear: surely it intimates a break from the roles ascribed her, especially after it follows a day filled with frustrations unlike the routine others; and even so, what then is the solution to her alienation outside of the narrative's negation? Indeed, Jeanne's act is not one which unmistakably announces its reasons. There is a strangeness too it, and an openness involving its interpretation. It is, to coin a phrase, a poetic gesture. 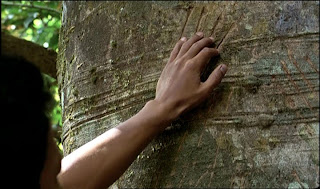 The poetic gesture is by no means alien to film history -- it appears time and again throughout history and across cultures. Then again, the sheer profusion of this (often) causally-unconditioned trope in the work of Apichatpong Weerasethakul sets a new standard. From the outset of his latest, Tropical Malady (2004), Apichatpong features circumstances that at best defy logic: for instance the opening clamor by soldiers to have themselves photographed with a dead body that they've found, the next sequence's quixotic presentation (in long shot) of a naked man walking in the brush, or the ostensible occupation of the local boy in a factory where ice is cut. To see these actions and events is to witness behavior (and perhaps customs) that has not been explained sufficiently. Again, this is why Jeanne Dielman is so instructive: in spite of the clarity that the narrative presents up to its denouement, there is an interpretative opacity created by so odd a behavior.

Which leads one to the second point involving the so-called "poetic gesture": that it presents behavior which is not commensurate with our understanding of rational action. It is in this capacity that Apichatpong's films show the fullest co-option of this trope. Part one of Tropical Malady ends with a scene of romantic intimacy involving its two gay lovers, where they take turns licking one another's hands. On its own, this behavior is preposterous: this is not a normal expression of physical love and desire, full stop. However, when understood in terms of the film's guiding matrix -- "that all of us are by nature wild beasts," and that it is our "duty" to keep our "bestiality in check" -- the impetus behind such behavior is articulated. Like the concluding card game in Luis Buñuel's Viridiana (1961), sex is transfigured into an action whose literal reading does not follow causally from the preceding.

What sets Tropical Malady apart as an exemplar of this trope, however, is not simply the presence of irrational behavior, but is moreover the form's facility in lending meaning to the unaccountable. Part two of Apichatpong's film ultimately refracts the first half, consigning new meaning to a romance masked by the protagonists' near ubiquitous smiles. Subtitled "A Spirit's Path," this journey into a folkloric world populated by a shaman with the power to turn himself into animal form, establishes a parallel to the first half, albeit in a phenomenologically unreal space. Whereas part one purported to present an unembellished modern world, though one whose meaning is obscured in the strangeness of the protagonists' behavior, part two is a purely fictional, fabulist world where causality is dictated by the parameters of the narration. Yet, it is through this illusory world the abstruse earlier half is explained: desire, as is present in the preceding romance, invariably leads to the same destruction wrought by the tiger-spirit in the subsequent fable. Through the second-level matrix of the 'Spirit's Path' narrative, Apichatpong sheds meaning on a sequence of outward gestures which are at once obscure and unreliable; in theory, part one could represent a replicated time and space in a way that science makes clear part two does not. However, Apichatpong uses the unreal to give meaning to the real, which is nothing more than the essence of art itself.

However, it is important not to go too far afield from the topic at hand. Part two also succeeds in further instantiating the poetic gesture's operative function: to convey meaning elliptically, just as poetry uses language in the same capacity. As art is itself a step back from reality with the intention of seeing with greater clarity -- as if we are not only seeing through a glass dimly but are likewise far-sighted -- the poetic gesture's purpose is to distance representation from the everyday, to shatter the illusion of mimetic reproduction, and in the process, to compel active critical interpretation. When meaning is not immediately evident within the contours of an action, the viewer must work more judiciously to grasp a work's meaning. This very process is allegorized in Tropical Malady: the strange world of part one is shown to signify broader truths, while the isolated expressiveness of its gestures often fail to sufficiently convey meaning. With the accompaniment of the second part, the unaccountable things of the first again gain intellection. Indeed, part two is the critical process demanded by the first half's ambiguity; that it is in fable where the truth becomes clearest -- not in the less abstract replication of reality described in the first part -- only underscores art's functional remove from the banal.
Posted by Michael J. Anderson at 4:01 PM