With the DVD release of Jan Svankmajer's 12-minute animated bricolage Dimensions of Dialogue (1982) earlier this summer, one of the truly singular works of the animated cinema is finally available in the United States. Certainly, Svankmajer's reputation as one of the great Surrealists of his chosen medium was already secure with the wide availability of such recent major works as Conspirators of Pleasure (1996) and Little Otik (2000). However, it is with the relatively diminutive Dimensions of Dialogue that Svankmajer shows himself to be one of the three or four most important artists of the Communist twilight in Eastern Europe. Surely, for the brilliance of its form, the ambitiousness of its subject and the boldness of its critique, Dimensions of Dialogue deserves to be considered in the class of this epoch's greatest achievements and as Svankmajer's masterpiece to wit. 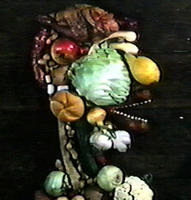 In the first dialogue, two anthropomorphized assemblages of food-stuffs and kitchen utensils respectively lurch towards one another with the latter devouring the former. In turn, this pattern is repeated when a collection of intellectual markers vies with the kitchen products destroying the returning collage with similarly ease. Next it is the now degraded food objects which sully the books, paints, etc., as though the two were mingling in some fictious trash bin. This process of disintegration continues with the resulting forms appearing closer and closer to the form of man himself.

The resulting clay human figure proceeds to spit out a facsimile of himself, as does the copy and so on. Consequently what this series of degradations finally produces is a human figure to be sure, but one lacking in any distinguishing characteristics. Given this lack of defining humanity, Svankmajer invites his spectator to read the inscribed process in negative terms: in turning over from one identity to the next there is a loss until ultimately, variation from one figure to the next ceases to exist. Moreover, the identities of these figures seem to cast light on the specificity of Svankmajer's critique -- the first seems to figure agrarianism, the second, industrialism, and the third a life of letters perhaps most closely associated with the bourgeoisie. In this series of revolutions, mankind destroys its uniqueness, which provides Svankmajer's 'Exhaustive Discussion' its critical heft; Marx's understanding of class antagonism is the subject of Svankmajer's critique.

Though it hardly seems possible, the second section of Dimensions of Dialogue exceeds even the first in its organic representation of critical discourse within an ostensibly analogical narrative. Here two clay figures, a man and a woman, commence an amorous affair. The two figures literally become indistinguishable from one another as Svankmajer manipulates the forms while utilizing his typical stop-motion technique (as he does in the first and third parts as well). In the midst of their passion, Svankmajer shows great economy depicting their love-making in such visuals as a hand and a breast alone amidst a large, amorphic blob of clay.

Once the pair finish, a small piece of their shared physical intercourse is left bouncing about on the table. Neither wishes to reclaim this lost substance, leading the pair to fling it -- their shared past -- at one another. This emerging antagonism becomes only a prelude as the two, now in full No Exit-mode, proceed to rip each other's faces out. What began as ecstatic passion ends in mutual annihilation; certainly, Svankmajer possesses no less skepticism towards the hope of romantic satisfaction than he does in the benefits of revolution seeded in class conflict.

The final section, 'Factual Conversation,' begins with the harmonious interaction of two male busts as they produce various complementary objects from their mouths.

After this first concordant round, they produce objects that no longer work together, producing a relative absurdity and incongruence of interaction which is definitively surreal. Yet, their give-and-take does not stop here. The two continue in this exchange until their respective orifices begin to offer similar, competing objects, which eventually assures their mutual destruction. While it might be tempting to read part three, consequently, as a critique of capitalism -- which it may be -- the more compelling reading, given the film's historical circumstances and the undeniable tenor of the first part, would be as a breakdown of mutual benefit, thereby skewering socialism in equal measure. (Though it might also be tempting to view part three in light of the Cold War provided the above verbal analogy, the shared benefit inscribed would seem to rule out this possibility.)

Whatever the precise reading is of this third part, however, what does remain clear is that together, Svankmajer underlines the folly of human interaction on the levels of power (political), sex (interpersonal) and capital (financial).
Posted by Michael J. Anderson at 8:45 AM