The Guggenheim's Oteiza: Myth and Modernism, running now through the 24th, is the first comprehensive survey of the Basque sculptor's work ever to be mounted in this country. That his art not only prefigures 1960s-era minimalism but even exceeds much of it in its theoretical complexity renders any Jorge Oteiza exhibition essential. Yet, because of his limited exposure, Oteiza's reputation isn't what it deserves to be: as one of the key sculptors of the twentieth century.

The corpus of Jorge Oteiza (1908-2003) represents an early expression of the minimalist aesthetic in sculpture, presaging the work of Donald Judd and Basque countryman Eduardo Chillida by more than a decade. Yet it is not simply his timing in art historical terms that lends Oteiza's art its substantial merit, but instead it is the success of his formal experimentation in finding an original idiom through which to express his spiritual content. To be sure, this is an art that seeks to express immaterial, metaphysical reality through the decidedly material means of the sculptural medium. However, it is less matter that dictates the tenor of his work, but rather space which defines Oteiza's aesthetic. 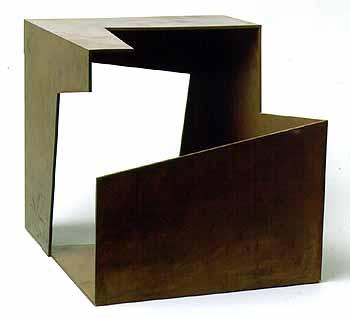 Particularly, Oteiza, by the mid 1950s, sought to give life to the negative space that conditioned his craft: in carving slits and "light condensers" into slabs of marble and alabaster, Oteiza called attention to the spatial transformations undergone in the process of sculpture, and moreover, to the fact of an invisible presence in the location of a negative space. Oteiza's work instantiates a world unseen; in absence and through absence, Oteiza depicts presence.

Naturally, this formal idiom translates religious allegory to the extent that the latter is similarly concerned with the metaphysical. The fact that Oteiza's corpus features such titles as "You are Peter" and "Portrait of the Holy Ghost" confirms this confluence of formal concerns and religious subject matter. Yet, Oteiza's work retains a clear pedagogical dimension apart from its utilization for religious expression. First, there is its function in shaping one's perception of the medium: no longer is sculpture defined by matter, but instead by the space of which that matter is only a part. 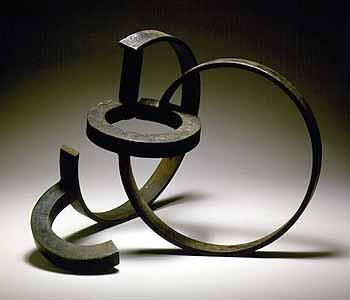 Second, as with his alabaster works, the permeability of the sculptural surface is underscored. Then again, this instability of surfaces retains a certain spiritual resonance to the degree that it elicits a fluidity of visible and invisible reality that denies the false posturings of skepticism. To deny immaterial existence is to twine one's epistemology to the very limited sensory experience of seeing. By the limiting means of sculpture, Oteiza conveys a world that far exceeds its material dimension. This is spiritual art of the first order because it asks the necessary formal questions.
Posted by Michael J. Anderson at 11:12 PM