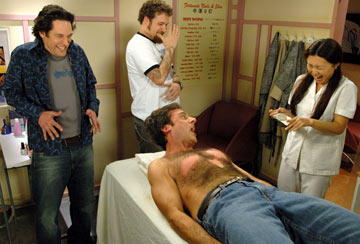 Judd Apatow's The 40-Year-Old Virgin does not hit screens without a certain amount of promise: after all, Apatow was the creator of the highly underrated television series "Undeclared" (2001), the follow-up to the exceptional "Freaks and Geeks" (1999), where he likewise worked in the capacities of both writer and director. Moreover, The 40-Year-Old Virgin seems to represent the belated break-through of its undeniably talented lead, Steve Carell, who has thus far shown brightest in his supporting roles in Anchorman (2004), as a correspondent on "The Daily Show," and most recently as America's answer to David Brent in NBC's remake of "The Office." While the latter may in fact come to fruition, The 40-Year-Old Virgin suffers most from its authorial viewpoint. To back-track, "Undeclared" is an under-appreciated series, to be sure, which hopefully will be remedied by its recent release on DVD, but this does not mean that it is without its deficiencies. Particularly, "Undeclared," like The 40 Year-Old-Virgin, showcases a lack of moral assessment when it comes to the sexual conduct of its character. If there is an ethos in Apatow's world -- of which "Freaks and Geeks" can be excluded on the basis that it is ultimately Paul Feig's creation -- it is that people will have sex, period. There is no moral reckoning based on abstract principles.

At this point, any viewer of The 40-Year-Old Virgin (or "Undeclared") might challenge this interpretation on the basis that Carell's character final contests that his prolonged virginity has found a meaning in his love for Trish (Catherine Keener, Being John Malkovich), leading them to a very family value-friendly consummation (in terms of its circumstances at least). Even so, up to this point, Carell's sojourn in the land of the untouched proceeded not from a moral calculus of his own but rather out of his particular romantic ineptitude -- he would have if he could have. In other words, Carell's character uses the convenience of his inadequacies to steak out a moral position: his virginity is an accident, meted by his peculiar character flaws. What all of this means is that Apatow has to find a way to redeem Carell, short of simply getting his character laid -- hence the recourse to a love of a lifetime, Firehouse-style.

On the level of conceit, what Apatow has on his hands is a sitcom plot, demanding a twenty-two minute narrative. At 110 minutes, our prolonged wait for Carell's loss of virginity might just resemble his own 40-year frustration. While Apatow deftly pulls off a Hitchcockian shift in audience desire -- we go from wanting to see the poor guy get some to hoping that he will not forsake his love for Trish -- he sure takes his time in getting there. When finally he does, we get one of the most singularly incompetent instances of cross-cutting I can remember in recent cinema -- somebody needs to bone-up on old Griffith. (Oh, and a memo to Judd, there is a difference between racism on-screen in 1915 and in 2005 -- you don't get the same pass that some of us are willing to extend to The Birth of a Nation, provided its very different social circumstances.) When you cut between two plot lines, conceivably to heighten tension and raise the possibility that things won't turn out the way we might like them to, it is best that they somehow intersect. Since it is Beth's (Elizabeth Banks) and not his apartment that they go back to, there is no danger that Trish will walk in on them, thereby deflating any potential for suspense in his use of a technique then generally connotes exactly that; the principle is so elementary, in fact, that one wonders how it is possible for a director with Apatow's experience to screw it up that badly.

Really, though, it is not really Apatow's lack of a moral intelligence and his inadequate filmmaking that makes The 40-Year-Old Virgin frequently unpleasurable viewing. Instead, it is the film's unrelenting profanity and repetitiveness that truly tests the patience of its audience. The scene where Carell's chest hair is removed in one section after another seems to be the perfect metaphor for the viewer who might not automatically embrace Apatow's profane perspective. In the end, The 40-Year-Old Virgin shares its basic structure with another of this summer's most highly-anticipated comedy's, The Aristocrats: the same joke is repeated time and again, with only the slightest of modifications. What does Apatow call his act? The 40-Year-Old Virgin! 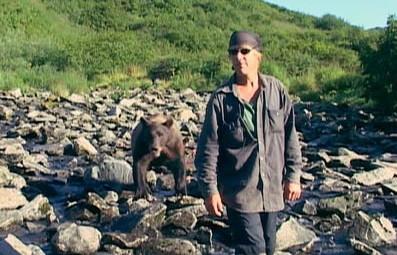 There is no similar limitation of scope to Werner Herzog's Grizzly Man, yet another major work from the poet laureate of ecological antagonism and civilizational abandonment. As the director himself puts it in his endlessly fascinating voice-over, nature is not the harmonious entity that the film's subject (and grizzly meal) Timothy Treadwell posits, but is instead characterized by "chaos, disharmony and murder." This is to say that in the story of Treadwell, Herzog has found a subject as comfortable in the director's archetypal universe as were Kaspar Hauser or Fitzcarraldo.

That story, of a man who has left civilization to record and protect Alaskan Brown Bears, only to himself to be devoured by one of the great creatures -- along with his girlfriend -- is presented in a series of home movies made by Treadwell and later assembled and narrated, with additional commentary footage and interviews, by Herzog. More than any other film in recent memory, Grizzly Man thus stands as a case study in the auteur theory: namely that the ultimate measure of a film consists not only in the text but in its extra-textual circumstances and relation to a broader corpus of work as well.

In other words, it gains value by virtue of its status within the director's body of work, which in this case is as a film that presents nature's passive indifference contraposed with a protagonist who thirsts for an escape from a cruel civilization. However it is precisely Treadwell's false, romanticized notions of the ecological other that precipitates his real-life killing: as one bumpkin-ish character notes, Treadwell seemed to treat these beasts as if they were human beings in bear suits rather than the soul-less creatures that Herzog himself memorably analyzes.

Indeed, Grizzly Man is filled with moments of such hermeneutical insight, showing not only the delusions of an individual who had been burnt one too many times by human order, but further of man's subjugation to the cosmos, particularly in this mode of existence. When Treadwell, in spite of his belief system, prays for divine intervention to save the creatures at a moment of ecological crisis, Herzog allows an interpretative space which would seem the only honest conveyance of a causality whose immaterial reality precludes a visual expression. This is to say that Herzog, in his clearly crafted re-presentation of the Treadwell story, does not simply tell, but indeed allows the viewer to contemplate the surfaces that comprise his art. In the end, the stare of the grizzly that Herzog fashions as disinterestedness -- surely the most reasonable explanation, mind you -- retains its inherent ambiguity by virtue of its surface materiality. This is a cinema, in other words, which could not exist in any other medium; this, we might observe, is the very opposite of Apatow's brand of comic filmmaking.
Posted by Michael J. Anderson at 11:30 PM