Alberto Cavalcanti's Went the Day Well? (1942) is the sort of film that gives me pause concerning one of my firmer held beliefs: that the measure of a film's value lies not in what is said, but in how it says it. You see, Cavalcanti's picture is a piece of British war propaganda, made in 1942, which paints the British public as a noble fraternity -- duplicitous double agents aside -- sacrificing everything in order to defeat the common enemy. It is not just the men of Bramley Green who put their lives on the line to defeat their German captors, but the women and even the children who do so as well. 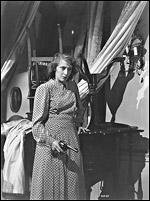 Went the Day Well? does not shy away from the collateral costs of war nor does it merely schematize the Germans as a bumbling, easy to defeat opponent. This is a work of the highest level of integrity that no less than expected its spectators to show the same vigilance as those who gave their lives to defeat the enemy force. Cavalcanti's picture is a work of profound nobility.

Of course, some of what I have just mentioned is not strictly a matter of content, but is likewise attributable to the film's particular form. For instance, Cavalcanti's representation of the Germans as a competent military force -- not always the rule in the period's films -- proves essential in the film's discourse, and ultimately its strength as propaganda: they cannot be easily beaten; it will take extreme fortitude. On a visceral level, moreover, Went the Day Well? also benefits from Cavalcanti's dexterous manipulation of suspense. (This quality is also evident in his subsequent They Made Me a Fugitive (1947), perhaps the greatest British postwar thriller -- exceeding even Carol Reed's better-remembered classic, The Third Man [1949]). With Went the Day Well, one of the key components of his mastery of tension is his use of sound. In one of the key scenes, where the British civilians have escaped their German captors, Cavalcanti completely cuts the sound altogether, thereby translating this affected silence into the veil of night that the medium's visual mandate precludes. No film, after all, can represent action in complete darkness. So, in this way the distinction established at the outset -- between the telling and the message -- is moot. Went the Day Well? excels in both its form and its moral resoluteness.
Posted by Michael J. Anderson at 12:53 AM

Michael,
I too am very fond of this film. It is a pity it is not better known.
Peter

Michael,
I too like this film. It is a pity it is not better known.
Peter