Looking at Ford, Looking through Hawks

"I repeat myself in keeping with Orson Welles who after viewing Stagecoach 40 times before embarking on Citizen Kane said he was influenced by the old guys; the 'classical' film makers, by which he meant 'John Ford, John Ford and John Ford.' If the pantheon of classical music is 'the three Bs' (Bach, Beethoven and Brahms), then it is arguable there is only one true great in cinema - and that's the man who won more Academy Awards (five) than anyone before or since."

"The problem lies in Hawks's apparent transparency, in a stylistic presence that is relentlessly invisible, self-effacing, difficult to see, and extremely difficult to analyze. The subtlety of Hawks's style is one of the most significant features of his work, but it is also the greatest obstacle to the widespread recognition of his talent as a film-maker."

Atop the pantheon of great Hollywood directors, three men tower above the rest -- and with all due deference to Richard Franklin, these men are not named John Ford, John Ford, and John Ford. Well, one of them is, but the other two preferred to go by their given names, Alfred Hitchcock and Howard Hawks. In the case of the former, no further allowances need be made at the present: few filmmaker's can claim an academic journal devoted entirely to the scholarly research of their career's as can the 'Master of Suspense' (for the record, the publication in question is the Hitchcock Annual, edited by a former professor of mine, Richard Allen). Hawks, on the other hand, remains the red-headed step child of the big three, never quite reaching the same level of international acclaim as the other two; his corpus seems to lack a Vertigo (1958) or a Searchers (1956), which is to say a single masterpiece generally considered to be not only his best, but further one of the great works of world cinema.

Again, much of the difficultly surrounding Hawks's work lies not so much in his choice of subjects or in his themes, but instead in the apparent invisibility of his style. Ford is the perfect counterpoint to the Hawks's visual schema. To paint the great director of western's in the broadest of brushstrokes, Ford's is a cinema devoted to a mythology of the West, whereby the wilderness is painstakingly brought under the thumb of civilization. This cursory explanation for his primary mega-theme is consequently translated into imagery that contraposes a nascent civilization and said wilds. 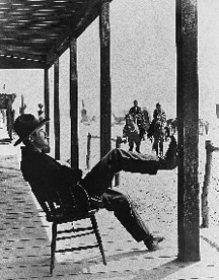 Take for instance the adjacent image from My Darling Clementine (1946): here, Henry Fonda's Wyatt Earp reclines on a porch overlooking the wilderness that surrounds the ominously-named Tombstone. In so doing, Ford has visualized his principle theme, inasmuch as Earp (and Tombstone) itself) stands for an ordering force challenging a brutal nature. A second exact visual expression of Ford's ideas occurs in the sequence where a dance is staged at the site of the church's construction. With the half-built structure allowing a vantage out onto the surrounding desert, Ford effectively imparts his basic conflict visually: the wilderness is being tamed with the aid of society's bedrock institutions, the church and the law. Our understanding of his art is therefore deepened by our reading of his imagery. In the interplay of the foreground and background, Ford establishes his principle dialectic.

The opposite is true of the cinema of Howard Hawks: if we look at the screen in Ford, we look through it in Hawks. First, while Ford is primarily concerned with the mythology of the West, Hawks seems to have no similar predilection for this subject matter. Rather what is most remarkable about the latter's corpus, famously dispersed over a wide variety genres -- including the western -- is its uniform interest in homo-social groups of men (and occasionally the spare woman) who are continually shown at work. As Andrew Sarris once put it so succinctly, the basic thread running through his cinema is that "man is measured by his work... not in his ability to communicate with women." This concern, again, manifests across genre boundaries, becoming the key theme in his own great western, Rio Bravo (1959), where Dude (Dean Martin) struggles with his own alcoholism, finally finding redemption in his renewed professional ability. 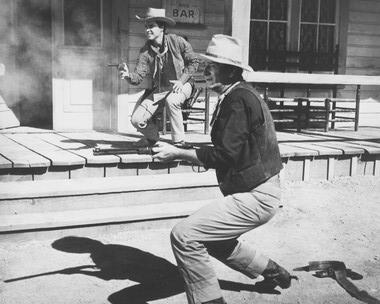 Similarly, John Wayne's John T. Chance, in an explicit reversal of Fred Zinnemann's High Noon (1952) matrix, must depend upon the help of others, even as he attempts to go it alone. This dialectic between an individualist ethos and his dependence upon the group is no less profoundly American in its analysis... but I digress; the point is that Ford's themes are central to the genre of which he is the most famous practitioner, while Hawks's manifest themselves time and again, across a wide array of genres.

But what does this have to do with the visual substance of Hawks's work? For the director, form is subservient to the greater themes of the work -- no less than Ford, in fact, form and discourse are consubstantial. Their intermingling, however, is expressed in a very different fashion: whereas, once more, Ford communicates the garden-wilderness dichotomy visually, among other ways, Hawks explicates his themes with a style that expresses his ideas cleanly and without distraction. He shoots his human subjects straight-on (just below eye-level) in comparison with Ford's favored lower angles, looking up at his heroic subject matter. Hawks's figures are commonly staged within the same space -- in two's, etc. -- at a medium distance. When his group is larger than two or three persons, his staging tends to recede to a middle distance that allows his character's to interact in a unified space. Very little action occurs in the background, which varies in size depending upon his utilization of the middle ground, which again flows from the number of characters who populate the scene. In any case, the interactions occur quite near to the camera. 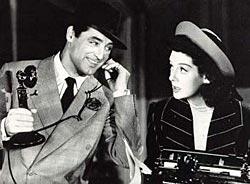 (1940). Here, Hawks cuts only when the content precipitates a change in framing or when it is merited, in order to accentuate an important moment in the drama. An example of the latter would be Hawks's cut when Hildy reacts to Walter's off-handed proposal of (re)marriage.

In so rigorously maintaining this schema, Hawks effects an invisibility to the degree the camera, in following the action with a very plain compositional style, refuses to call attention to itself. Thematically, his perpendicular camera, staging of characters so that they are able to interact within a single space, and unobtrusive editing all instantiate formal corollaries to the director's egalitarian vision. The problem is, with regard to his work's formal comprehension, that each of these techniques makes his artistry disappear. Then again, his egalitarian world view demands nothing less than his unpretentious mise-en-scene.

Ultimately, we look past the visual art of Hawks, through to a broader set of themes and concerns that appear and reappear in work after work. The form of his cinema is independent of the content in terms of its relation to genre; then again, Hawks's camera work and editing precisely enacts the ideology contained in his art. The point is that his world view necessitates an essential artlessness, and is protean mastery of genre demands light stylistic footprints, provided that his work is to maintain a thematic unity.

Returning thus to the above comparison, whereas Ford uses the space of his art to juxtapose conflict, Hawks's space is the location of his enacted subject matter. That his individual shots are so profoundly unmemorable, therefore, becomes part of this matrix. Again, we see through Hawks's films, figuratively, to the content, while in Ford's graphic constructions we see his ideology. In this basic difference, we see the very substance of their art.
Posted by Michael J. Anderson at 12:42 PM