New Film: A History of Violence 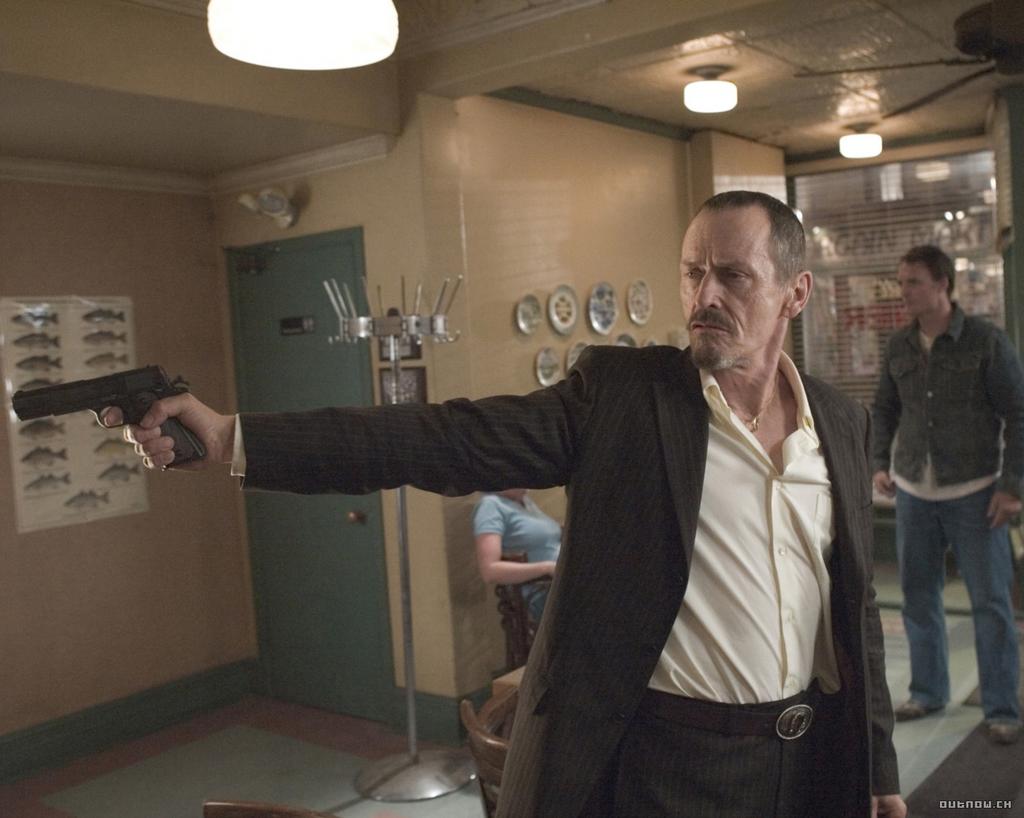 David Cronenberg's A History of Violence is to date the best English-language film of 2005. That it should be so will come as no surprise to anyone who has paid attention to the director's work over the last decade. To a film, there is perhaps no corpus in the Anglo-Saxon cinema during this time which has continued to examine the mysterious depths of personality in the way that Cronenberg's has. For the countless scores of movies that seek to awe and entertain us -- and make no mistake, Cronenberg does both -- here is a body of work that foremost seeks to ask the most essential of questions, what is it to be human? Indeed, a film like A History of Violence makes us wonder why all films don't attempt something similar, given the ease with which the visceral and the thought-provoking commingle within the film.

But of course A History of Violence is a rarity for Hollywood. Then again, as much as we sometimes like to pretend otherwise, a film like Cronenberg's has always been a rarity in Hollywood. Why does Alfred Hitchcock -- Cronenberg's most obvious influence in A History of Violence -- continue to engender such a cultish following? Because he was unique, because he was better than most... and so too is Cronenberg.

Like Hitchcock, Cronenberg adapts the default form of Hollywood classicism to suit his own idiosyncratic narrative ends. 'Adapt' (rather than adopt) as his form, at times, evinces its own consubstantial logic quite apart from the basic codes of Hollywood storytelling. Perhaps the best example of Cronenberg's narratological flexibility occurs in the opening scene in which two outsider hoods "check out" of their motel. With the camera remaining outside their crummy roadside accommodations, Cronenberg introduces us to these characters by making a very important discursive point: they are cold-blooded killers. This point, indeed, is not made until Cronenberg cuts for the first time as the character who had remained outside the entire time enters the motel office. Inside we see, along with the indifferent henchman, that his protege has executed the two motel workers. That Cronenberg maintained the spatial and temporal continuity of the earlier shot confirms what has already been suggested: that he entered the space with the sole purpose of murdering the pair; that it was not accidental, that his execution did not involve a struggle or any sort of in-the-moment rationalization (had there been a cut, on the other hand, either would have been structurally possible). If this is not enough, the gentleman now in the room proceeds to kill a little girl who spots him looking through a cooler -- an on-screen variation of what had been already established through a singluar stylistic choice. 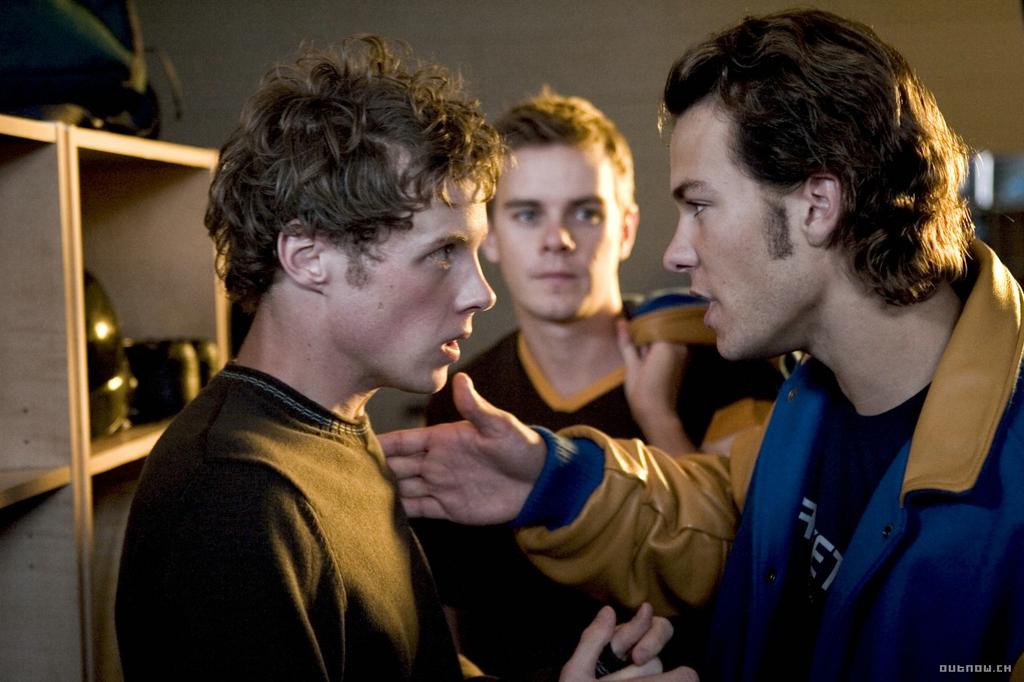 In the next shot we are introduced to the film's protagonists, Tom Stall (Viggo Mortensen), his beautiful wife (Maria Bello), his son and daughter. The screaming little girl is quickly reassured that there is no such thing as monsters as we are ominously introduced to this swath of small-town American perfection -- and their seemingly obvious future victimization. (Importantly, Cronenberg does not make fun of their ethos: visually he shows the natural beauty of the Midwest, while the couple's sexual life seems to indicate an uninhibited ideal.) However, before we get to this point, Cronenberg establishes the teenage son's victimhood -- to a high school bully -- giving us another character on whom we wish justice meted.

Subsequently, the two out-of-towners force their way into Tom's diner at closing time. Once it becomes clear that they are there to rob the establishment -- which we know will mean certain death for our protagonists -- and once one of the characters moves to rape the female waitress, Tom acts almost instinctively, killing the pair of assailants with breathless dexterity. Suffice to say that he is regarded as a hero and that we feel no sympathy for the dead, even if we might regret their physical pain (which Cronenberg carefully includes).

However, as any one who has ever seen a Cronenberg film knows, what follows is anything but straight narrative. Following Tom's heroic action, a mangled Ed Harris and a pair of his cronies arrive in the diner. Mr. Harris's character insists on calling Tom, Joey, which, for the naturalistic grace of Mortensen's performance, we find as odd as Tom evidently does. Regardless, the former persists, and Tom seems to have been thrust in a very Hitchcockian 'wrong man' scenario. As we soon learn, Harris is a mobster with a beef against this Joey who was responsible for carving up his face with barbed wire. Again, for those acclimated to the Cronenberg universe (think Spider, 2002) one begins to wonder if Tom is indeed Joey without knowing it -- that he is some kind of "schizo" as his wife wonders. Our answer comes shortly for this man who is strangely adept at killing, but who is nonetheless saved by his son at the last possible moment. (It is therefore implied that the young man might just share his father's violent acumen.) 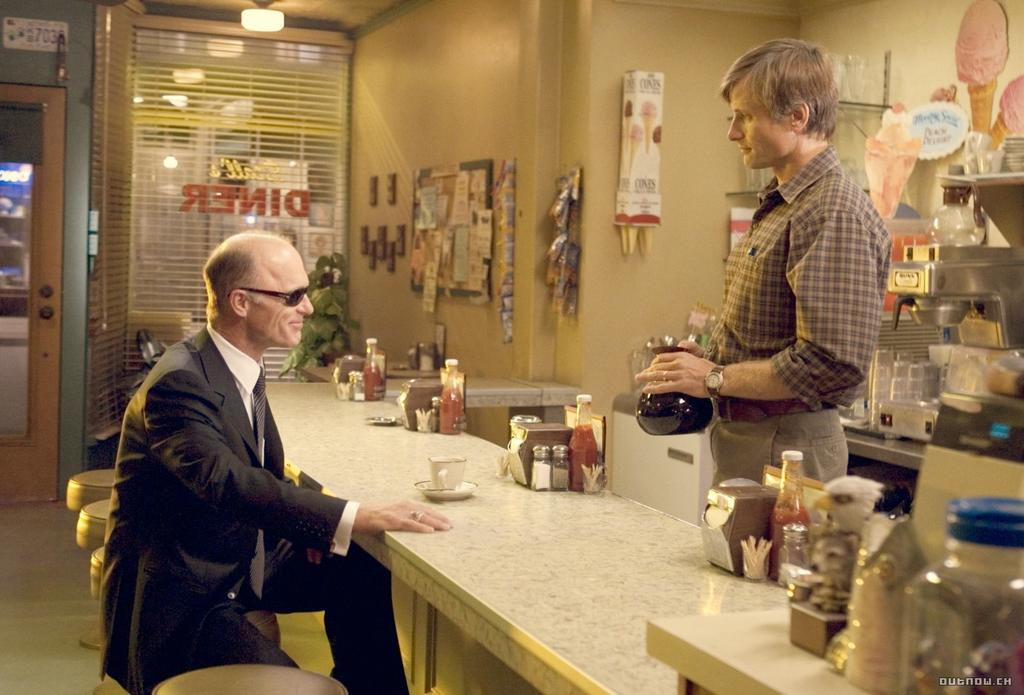 The point is, whether or not Tom/Joey is aware of his past, that this violence exists within him, which is precisely where Cronenberg's big questions commence. Does Tom bare responsibility for Joey's past actions if he is not aware of them? Which is Tom/Joey's true personality? Can he be both of these people at once, and if so what makes him the person he is (if it is not a single personality)? Who is he, in other words, and what is it that makes him human if not a unified self?

Of course, there is another dimension in what would seem to be his suppressed former (perhaps true, though not necessarily) self: that there is violence living inside him. Indeed it is at this point that Cronenberg's film skips over any possible misreading as political allegory -- violence is a fact of life, or more precisely in the instance of this narrative, a former life. In fact, the history to which the title refers is that of Tom's self, a history which Cronenberg's narrative slight-of-hand shows to be in his everyman, and implicitly in all of us. That his physically timid son manifests the same violence (while finding a narrative causality in his genetics) reinforces the ubiquity of human violence. While it is true that Cronenberg is removing the too-perfect veneer of Middle America, it is of even greater importance that he is excoriating the illusory skin of human goodness. In this most perfectly ordered specimen there is untamed violence.
Posted by Michael J. Anderson at 9:30 PM

A very nice review, and an interesting "wrong man" reading (I suppose Viggo is, in a strange way, a bit of a duplicitous blond as well) but I didn't recognize a particularly Hitchcockian influence.

Cronenberg's working through a variety of genres here: the ones that struck me most obviously were the Western, the high school drama, the gangster film, the super-hero movie (more subtle, but very much present, right down to Tom's "secret identity"). But Hitchcock didn't make any movies in any of those genres.

You talk about Cronenberg's dialogue with the system, and I would say that it is that system in total that is his key influence. The title is so perfect because while it does refer to Tom's mysterious past, if we change the article from 'a' to 'the' or forget it entirely (as audiences are sure to do) it instead describes the movie's status as a catalogue of violent cinematic genres.

The Hitchcock aspect I didn't feel as strongly but it's an interesting one to think about. I guess I have to see it again!