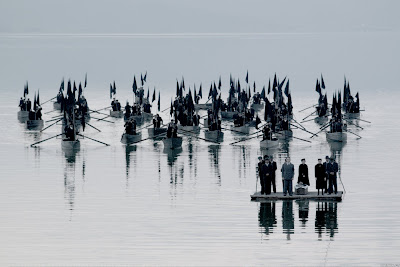 There are anachronisms and then there are anachronisms. If in the past I have found it necessary to praise a director like Clint Eastwood for a technique more at home in 1962 than in its own age, I have done so with the feeling that for someone like him, form was only a means to an end. For Eastwood, style was (and is) never its own justification, but can be rather something to detract from the urgency of his narratives. To someone like Eastwood, modifications in form, rather than indicating some sort of aesthetic progress, possessed a danger in their potential to obscure his artistic intentions. At the same time, these same purposes were never themselves static, but instead experienced remolding in the image of their own particular moments. In short, while his technique stayed the same, his thought was evolving.

At first glance, Theo Angelopoulos might strike one as the same sort of figure. After all, The Weeping Meadow, whatever else it is, is a film from a different stylistic moment. Nonetheless, the ideas contained in The Weeping Meadow show the director's evolution from a Marxist historicism, focusing almost exclusively on Greek history (The Travelling Players, 1975), to a more existential consideration of Balkan realities (Ulysses' Gaze, 1995). Yet, there is one important difference between the aforementioned Eastwood and Angelopoulos: whereas invisibility of style is Eastwood's ultimate end, Angelopoulos has long foregrounded his own once dazzling technique.

The problem is, it no longer seems as though the Greek auteur is utilizing his form to ask questions. If The Travelling Players established a fatal continuity to the exigencies of Greek history, via a camera that moved from figure grouping to figure grouping, often bridging temporal discontinuities over the course of a single tracking shot, The Weeping Meadow's continued employment of this same style, minus its formally radical employment, fails to remain self-justified. If anything, The Weeping Meadow is a film that should have been made twenty-five plus years ago, considering its scant modifications of his own modernist form. (Sparing use of music psychologically is in fact the only reevaluation of Angelopoulos' Travelling Players' technique.) This is, in other words, a profoundly dated text. Of course,The Weeping Meadow has its moments of beauty -- which Angelopoulos, as always, never allow his spectators to forget -- but the ability to photograph a Greek landscape poetically loses some of its appeal as the film drags on toward the three hour mark. Its one thing to watch Angelopoulos reinvent the medium for four continuous hours in The Travelling Players; it's yet another thing to see him copying himself -- poorly -- for three.

So again, there are anachronisms and there are anachronisms. Unfortunately, a thirty-year late re-tread of late modernism is not exactly the most enticing variety. If anything, The Weeping Meadow reconfirms the necessity to understand films at the moment of their creation. If we can forgive a film like The Birth of a Nation (1915) for its aberrant politics (by today's standards) it is likewise important to understand the inadequacy of a film like The Weeping Meadow on the basis of its historical moment -- which unfortunately for the director ended long ago.
Posted by Michael J. Anderson at 12:26 PM