The Year in Film 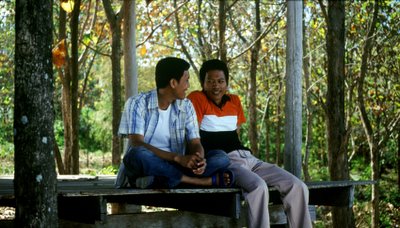 As much as a number of my colleagues seem to be convinced that 2005 was a great year for film-going, I remain somewhat unimpressed by the quality of new work which I saw during the previous twelve months. To say this is not to imply that there was a dearth of films worthy of mention as one of the year's best: I was reasonably satisfied with the quality of all ten films I mentioned for my Senses of Cinema ten best list which I submitted a couple of weeks ago, even before I saw an eleventh which I feel definitely deserves mention (which I will in my 'top 11' to follow). However, it is my belief that there has been noticeably few all-time great films released in the past three or four years. Put another way, I would say of the half-dozen or so best films that have been made since the conclusion of the 90s, only one was made after 2001 (and that was 2002's Russian Ark). And concerning these masterpieces -- Yi Yi, Werckmeister Harmonies, The House of Mirth, In the Mood for Love, I'm Going Home, Mulholland Drive, Spirited Away, Russian Ark -- I'm not sure any (save the first) would rate with the half dozen or so best films of the previous decade, which were in a few cases were made by the same directors (Edward Yang, Bela Tarr, Wong Kar-wai, Manoel de Oliveira) who had made clearly superior films during the prior ten years.

All of this is to wonder whether we are beginning to find ourselves between generations of great filmmakers -- as we did, I would submit in the late 70s and early 80s before the Asian new wave which was ushered in by such talents as Yang, Hou Hsiao-hsien, Tian Zhunagzhuang, John Woo, Takeshi Kitano and Hayao Miyazaki. Perhaps my number one will prove to be the first great film by one of the next generation's greatest artists, Apichatpong Weerasethakul? Perhaps Lisandro Alonso and his Argentine cinema will become this decade's [early] Abbas Kiarostami and Iran? Perhaps Lucile Hadzihalilovic will experience a peak comparable to Jane Campion's in the early to mid 90s? Hopefully, 2005 will prove ultimately to be the beginning of something new, not the trough that seems from its final days.

And the eleventh that I saw after my initial submission of the list:
Caché (Michael Haneke)

(For more detailed analyses of the best of these, see my annual annotated 'ten best' lists with a 2005 version to follow sometime next year.)

Then again, it was less the above films that truly rewarded my love of film this year than it was the rarely-screened silent, classical & post-classical Japanese pictures I saw as part of "The Beauty of the Everyday: Japan's Shochiku Company at 110," "Early Autumn: Masterworks of Japanese Cinema from the National Film Center, Tokyo," "The IFC Center's Weekend Classics," and "Naruse: The Unknown Master." For this cinephile, 2005 was the year of classical Japanese film in New York. It is only fitting that the best of these celebrated its fiftieth anniversary this past year.

Here are fifteen of the best: