The 49th New York Film Festival: Once Upon a Time in Anatolia 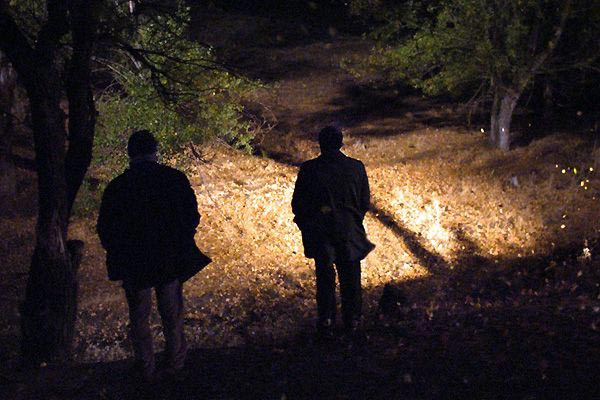 Nuri Bilge Ceylan's Once Upon a Time in Anatolia (Bir zamanlar Anadolu'da, 2011), from a screenplay by the director, his wife Ebru Ceylan and Ercan Kesal, arrives at the forty-ninth installment of the New York Film Festival as one of the year's most singularly ambitious works of film art, presenting a synthetic portrait of the bi-continental Turkish nation that the filmmaker constructs from the tissue of a series of European and Middle Eastern high-modernist master works. Following a pre-credit sequence that visually establishes both the obscurity of a number of Ceylan's images, as well his predilection for narratively emphatic zooms and push-ins, the director's latest transitions to the rolling, late autumnal landscapes of rural Anatolia. A small automotive caravan enters the frame, slowly motoring over the dirt roads that cut across the twilight hillsides. As the conversing figures inside become audible to the spectator, the vehicles remain perhaps miles from the camera at times, thereby replicating the visual idiom that Abbas Kiarostami developed throughout the 1990s. In this instance, Ceylan draws foremost on the apex of this strategy, The Wind Will Carry Us (1999), which likewise will produce conspicuous consequent citations in a frontal, medium close-up glance into a mirror and in the aleatory on-screen movements of a rolling apple as it is descends toward its final resting place in small creek. With the fallen piece of fruit joining others of its kind, Ceylan effectively visualizes the tension between fate and chance, while suggesting  a landscape populated with more dead like the body for which the party, as it happens, is searching.

The search itself begins at sunset, with the gracefully composed pink and orange sky quickly giving way to the pitch-black night. Ceylan's film accordingly becomes a work of nocturnal landscapes, with the vehicle's high-beams flooding not only the curving roadways, but also the potential excavation sites that the film's suspected killer Kenan (Firat Tanis) identifies as potential burial grounds for the missing person. Ceylan and cinematographer Gökhan Tiryaki's high-end digital F35 camera captures these spaces in more sensual blacks than are typical for digitally-shot cinema, with the headlights disclosing the facets of the natural panorama in strongly-directional golden whites. Their's is a painterly, frequently low-key aesthetic, as appropriate for its' latter-day noir as it is for the film's modernist art-cinema patrimony. With the group consequently arriving in a demographically endangered village - to the comic welcome of mayor, and co-writer Kesal's Mukhtar - a sudden loss of power impels the year's most distinctive set-piece, with a single lamp illuminating Mukhtar's gorgeous maiden daughter, as she serves each of their bewitched guests tea. As the sequence progresses with a series of dissolves mimicking their rolling losses of consciousnesses (following the party's long, on-screen night of exploration), Ceylan's film shifts into a more fantastical mode. At this juncture, Andrei Tarkovsky proves a marked point-of-reference, as he does likewise in an earlier exchange of conversing interior monologues, and as he will remain throughout much of the film's final act, where Stalker's (1979) return from the 'zone' suggests a narrative model.

Tarkovsky's own schizophrenic sense of rootedness, commensurate with his Russian identity (divided between East and West), returns as one of a set of binaries that defines Ceylan's national allegory: Once Upon a Time in Anatolia signposts both Turkey's Middle Eastern status and also its desired European allegiance, with the film's cosmopolitan prosecutor Nusret (Taner Birsel) comically offering that a bit of untoward police work will not help with the country's EU application. As he makes the claim, the aforementioned apple slides down the hillside, reminding the viewer of the Iranian auteur even as the aforesaid professes a hope for European assimilation; that is, Ceylan juxtaposes Turkey's split national personality, dividing the two on the level of style and content. Augmenting this split thereafter, and its cousin in the cosmopolitan-urban/villager-rural divide that structures the narrative, is the film's panoramic presentation of the nation's class structure and ethnic affiliations, which again register with the exceptional clarity in the memorable visit with the country mayor. In this instance, Nusret, Commissar Naci (Yilmaz Erdogan) and belated narrative focus, physician Cemal (Muhammet Uzuner) encircle the local head's table, while the "Arab" driver Ali (Ahmet Mumtaz Taylan), members of the military and even the convict are relegated to a peripheral second; Ceylan creates a graphic analogy for his picture's governing social-caste rhetoric. Many of the film's procedural sequences exhibit a similar two-tiered spatial logic - delivering his report as if it were a Shakespearean monologue, Nasret (at once genuinely dashing and tragically self-deluding) occupies the center of the mise-en-scène, while lower level functionaries mock him from the edge of the frame.

As the film enters its final, urban setting, the quotidian details of everyday existence come to replace the "fairy-tale" occurrences that marked the microcosmic group's excursion into the picturesque, though often visually obfuscated countryside. Moving from the country to the city, the police caravan seems also to be traveling through time. In the picture's last act, the mid-century existentialism of another master of landscape, Michelangelo Antonioni, moves into the fore. With the police procedural narrative at its end, the tension and excitement - the cinematic magic - of the genre film form falls away and the characters find themselves unmoored. Faced with the grim business of performing the dead man's autopsy, Cemal looks for a reason to continue his own Anatolian story. In a striking sequence near the end of the film that recalls the apocalyptic finale of Antonioni's L'Eclisse (1962), he wanders the nearly deserted small-town streets. Of course, Antonioni's modernism manifests itself to an even greater degree in the multiplicity of forms, figures and tones that insures that there exists no less comprehensiveness on the level of style as in the film's inscription of national identity. Ceylan's film, it remains to be said, combines comedy and criminal melodrama with extraordinary dexterity; indeed, in Once Upon a Time in Anatolia, these competing tendencies are paired frequently within the same set-up, as when Nusret compares the same corpse to Clark Gable that the Arab will later shove into his trunk, stashing an armful of pumpkins beside the dead man's head. The filmmakers, in other words, bring a gallows humor to a film that certainly is as classically pleasurable, ultimately, as it is meaningfully meandering.

Thanks for a great interpretation. I was absolutely stunned by this film. Here Ceylan takes a gigantic leap from auteur of quality European art house to the absolute forefront of the cinema of the new millennium. It seems that his previous films have been intimate rehearsals for this one where he finally had established the clout and financial means to fully realise his vision. It is in my opinion remarkably better than anything else he has ever done and for me it is quite conceivably the film of the year (maybe in a tie with Tarr). The pacing and unique 'unfolding of a crime film' reminds me of Cristi Puiu's similarly masterful, but much more intimate Aurora. I can't wait to see where Ceylan will go from here as this film seems to both encompass and transcend every aesthetic idea he ever presented in his work. Who would have thought he would develop them into something this singular.

Great to hear from you Lasse, and let me just say I agree with all of this.

Best review on the net (and print)! and I have read them "all". Good work, my compliments.

That is exceedingly kind of you, rd! Lisa and I were just trying to do some justice to the best film we have seen thus far in 2011.