Goya's Last Works, running now through May 14th at the Frick on New York's Upper East Side, is the first exhibition in this country to focus exclusively on the final phase of Francisco de Goya y Lucientes' career, and particularly on the work he did while in exile in Bordeaux, France during the mid-1820s. This is to say that the work on display largely follows his famed Black Paintings-cycle, wherein the characteristic grotesqueness and violent spirit of his work comes into sharpest relief (as in the signature "Saturn") -- given the spare settings and the unrepentant horror of these creeping later masterworks. The Bordeaux cycle, to be sure, particularly picks up on the latter characteristic, especially in the crayon sketches featured at the Frick, which showcase the genuinely humane dimension of the artist's vision, as his retinue of beasts, convicts, lunatics, witches, the infirmed and the elderly gain not only representation but indeed humanity in spite of their ugliness (such as with the "Man Looking for Fleas in His Shirt"; 1824-5, water color on ivory). Of course there is still social critique (as in "Man Killing Monk," c.1824-8) and perverse humor ("To Eat a Lot," also c. 1824-8, which portrays a gentleman crapping) evident in these remarkable sketches.

Visually, Goya's paintings of this period (which, for this exhibition, include the wonderful "Self-Portrait with Dr. Arreita" [1820] on loan from the Minneapolis Institute of the Arts) eschew spatial depth in the same fashion as the Black Paintings, though few match the chromatic darkness of that marginally-earlier cycle. If there is a key to the portraits that Goya limned in southwestern France, it would seem to be (as my girlfriend Lisa Broad, a film scholar as it happens, observed) in his individual depictions of their mouths -- just as the key to Rembrandt's portraiture is in his handling of his subject's eyes. In both, it is possible for us to perceive an entire internal universe, though one might say in Goya's case it is more personality whereas with the Dutch master that universe is the soul.

Regardless, whenever one has the opportunity to see a large number of Goya's -- even in smaller shows such as the Frick's -- it is hard not to conclude that Goya was indeed the most purely talented painter to emerge between Vermeer (if not Velazquez and Rembrandt) and Cezanne. His was an art that looked to Velazquez in particular, but which imprinted his own internal tumult and social vision on an art that humanized often the most inhuman of subjects. As his friend Antonio Brugada once said of him, "[he] had never been able to imitate anyone," and by the time of this final phase, "he was too old to begin." 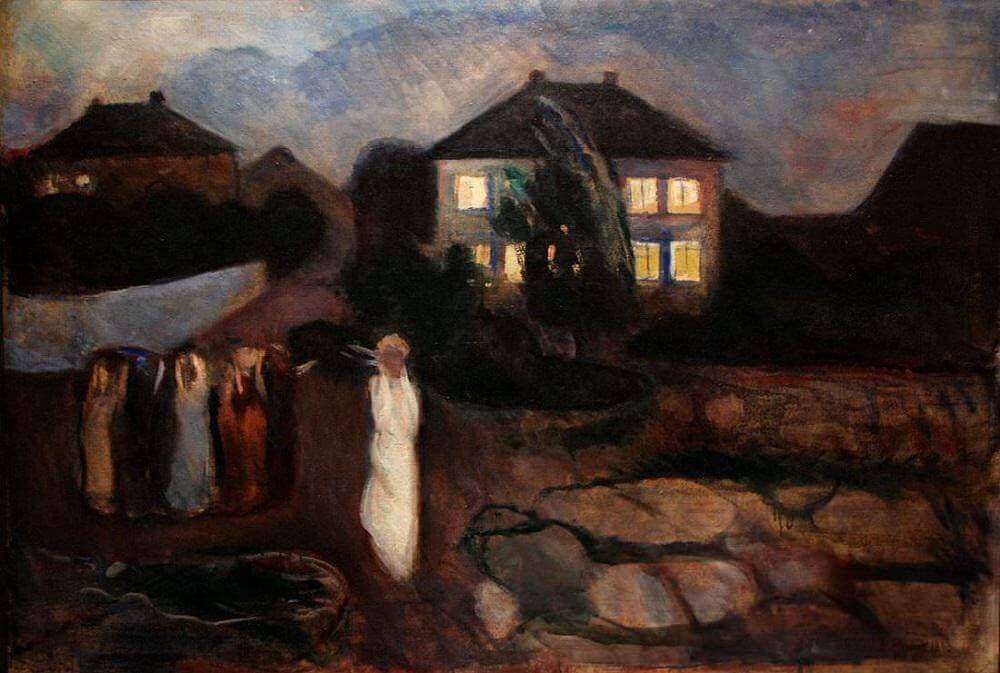 n contrast to Goya's unique idiom, the picture of Edvard Munch that emerges from the Museum of Modern Art's Edvard Munch: The Modern Life of the Soul is of a deft imitator who conveyed a singular vision only in the interstices of his lengthy career. A cursory survey of the MoMA's expansive showcase would seem to indicate that Norway's most famous painter borrowed extensively from Manet, Whistler, Seurat, Sargent, Klimt, Gauguin, Ensor and Van Gogh (in particular), among others. Yet, Munch was capable of distinguishing himself as a gifted depicter of fin-de-siecle unease, anguish and even despair, as with his Death in the Sick Rooms-cycle, and with such masterpieces as the aptly-titled "Despair" (1892), "Moonlight" (1893) and especially the singular "The Storm" (1893; from the MoMA's permanent collection) where a gale-wind messes with a bride, hands to face, and the formless figures of her bridal party who imitate her gesture. It is in pieces like these that Munch's perspective is clearest, finding its formal expression particularly in their pale quality of light, their insistence of hard, mannered gesture and the indistinct duplication of human features that mark these works. If, in the end, we see works like these -- and the exhibition's structuring absence, "The Scream" -- as exceptions rather than the rule for Munch, then the importance of a show like the MoMA's can be easily interpreted: in portraying Munch as the artist he actually was, not in the artist a few spare masterpieces would have led us to believe.
Posted by Michael J. Anderson at 3:42 PM